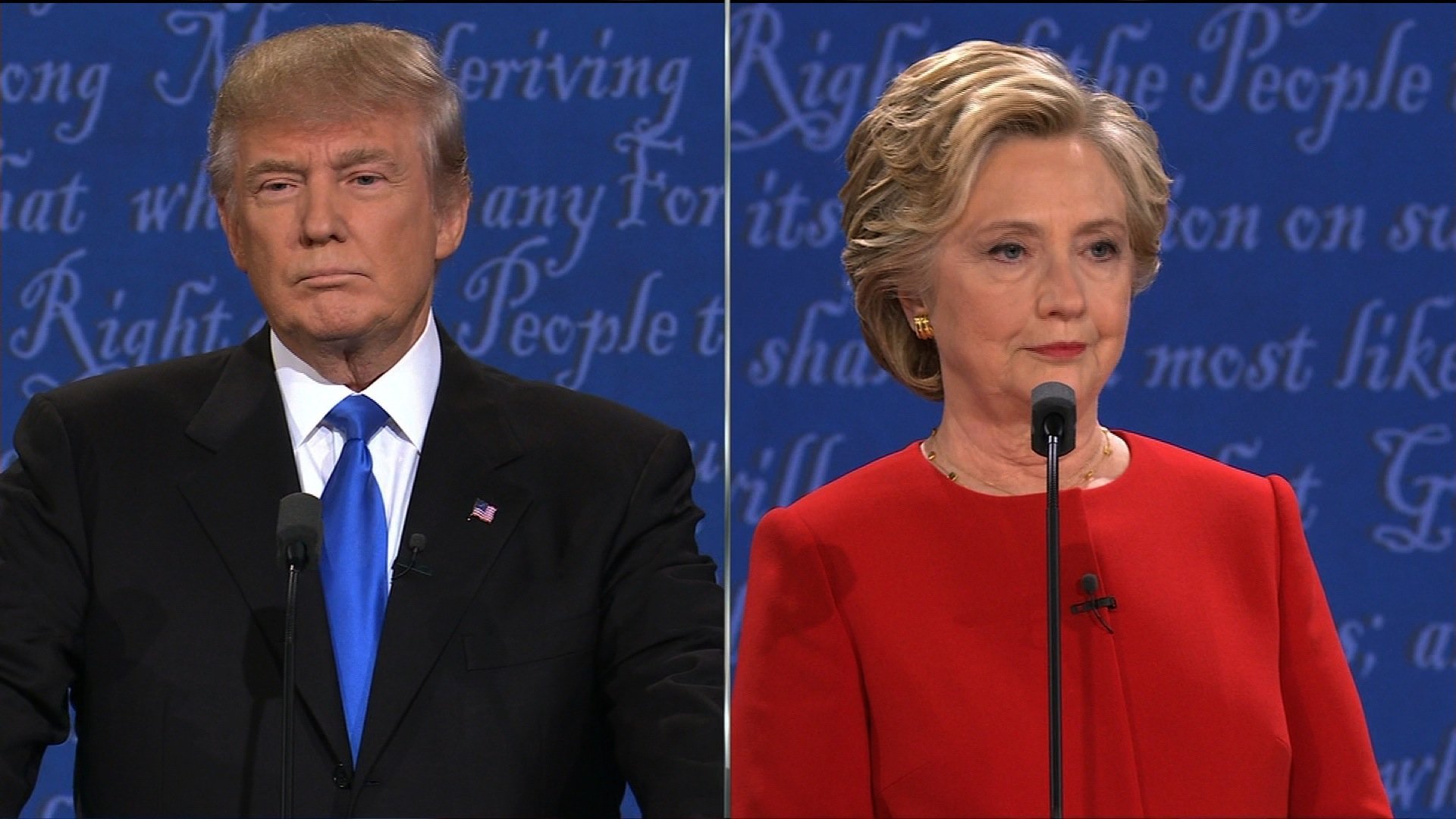 Hillary Clinton and Donald Trump clashed Monday in their first head-to-head debate of the general election season, with Trump in particular straying from the truth, CNN’s Reality Check Team found.

The team of reporters, researchers and editors across CNN listened throughout the debate and selected key statements from both candidates, rating them true; mostly true; true, but misleading; false; or it’s complicated.

Clinton claimed Trump “thinks that climate change is a hoax perpetrated by the Chinese,” a charge Trump immediately denied. Who’s telling the truth?

On November 6, 2012, Trump tweeted, “The concept of global warming was created by and for the Chinese in order to make U.S. manufacturing non-competitive.”

Over a year later, Trump tweeted in response to weather reports, “Snowing in Texas and Louisiana, record setting freezing temperatures throughout the country and beyond. Global warming is an expensive hoax!”

And Trump’s doubts have continued into the campaign season.

Last September, when he was seeking the Republican nomination, Trump told CNN that while he supports clean air and water, “I am not a believer in climate change.”

Trump went on to refute the connection between climate change and a rise in extreme weather phenomenon.

“Weather changes,” Trump said. “And you have storms, and you have rain, and you have beautiful days, but I do not believe that we should imperil the companies within our country. And by the way, China is doing nothing.”

In March, Trump took a more nuanced approach, telling a Washington Post editorial board that he doesn’t believe climate change is the result of man-made causes.

And while Trump has repeated the hoax line on multiple occasions, he’s walked back the assertion that it was created by the Chinese, saying he meant that as a joke … sort of.

While Trump doubts the validity of climate change, his company has prepared for it. According to a Politico report, Trump International Golf Links applied for a permit to build a sea wall at his golf course in Ireland to protect it from “global warming and its effects.”

Our verdict: True. While Trump has wavered on the cause of climate change, he has repeatedly denied its existence and called it a hoax.

“People have looked at both of our plans, have concluded that mine would create 10 million jobs and yours would lose us 3.5 million jobs,” Clinton said.

Clinton is quoting a report from Moody’s Analytics’ Mark Zandi that came out over the summer. Zandi’s report said the nation’s economy would grow by 10 million jobs under Clinton’s plan, but lose 3.4 million under Trump.

Those statistics, however, are misleading. Zandi found the economy would add 7.2 million jobs even if Clinton didn’t do anything. So her plan would boost job growth by about 3 million jobs.

Another analysis by Oxford Economics found that under Clinton, the nation would create an additional 200,000 jobs by the start of 2021 if she implements all her policies. Under Trump, however, the US would lose 4 million jobs, according to the report, released earlier this month.

Therefore, we rate Clinton’s claim as true, but misleading.

Trump and Clinton scuffled over the Trans-Pacific Partnership, with Trump asserting Clinton would ratify the massive trade pact should be elected president.

“You want to approve Trans-Pacific Partnership,” Trump claimed. “You were totally in favor of it. When you heard what I was saying, how bad it is, and you said, I can’t win that debate.”

“You called it the gold standard of trade deals,” Trump continued. Clinton responded by claiming she said she “hoped it would be a good deal, but when it was negotiated, which I was not responsible for, I concluded it wasn’t.”

Clinton is on the record calling TPP a “gold standard” deal in 2012 when she was serving as secretary of state, and her phrasing back then did not match her claim now of “hoping” the deal would be worthy of support.

“This TPP sets the gold standard in trade agreements to open free, transparent, fair trade, the kind of environment that has the rule of law and a level playing field,” Clinton said at an event in Australia in 2012. “And when negotiated, this agreement will cover 40% of the world’s total trade and build in strong protections for workers and the environment.”

However, Trump’s claim that Clinton would approve the trade deal if elected president does not match her current campaign statements. Clinton announced in October 2015 she was against TPP, saying the deal didn’t match what she’d hoped for as secretary of state. She has vowed to reject it if she wins.

Trump’s claim that Clinton called TPP the “gold standard” is true. But Trump’s claim Clinton would approve TPP as president is false.

How Trump got his start

Clinton hit Trump for his claims that he is a self-made man.

“You know, Donald was very fortunate in his life and that’s all to his benefit,” Clinton said. “He started his business with $14 million, borrowed from his father.”

Trump has repeatedly said that he built his companies and wealth from a $1 million loan he received from his father. While that loan may have gotten Trump’s business up and rolling, it leaves out many of the other loans and perks he got from being the son of a wealthy real estate developer in New York City.

According to the Wall Street Journal, a 1985 casino license disclosure proves that at the time of its filing, Trump had taken out $14 million in loans from his father, Fred Trump, in the late 1970s and 1980s.

Fred’s backing further helped Donald as he reassured city officials that he would “watch the construction and provide the financial credibility” of his son’s first big hotel deal, according to Wayne Barrett’s 1992 book, “Trump: The Deals and the Downfall.”

The elder Trump also set up trust funds to support his children, acted as a guarantor on loans that Donald applied for, and helped open doors for his son throughout the city.

While it is true that Trump began to build his business with a $1 million loan from his father, Clinton’s claim that Trump borrowed $14 million is also true and paints a more complete picture of the support Donald received from his father.

When Clinton said Trump had said he would negotiate down the national debt if elected, Trump denied it was true.

But in a May debate, Trump said he would try reducing the national debt by trying to get creditors to accept lower amounts than the US owed.

In an exchange at Monday’s debate, Clinton said, “You’ve said you’d negotiate down the national debt.” Trump interrupted her to say, “Wrong.”

In May, he also told CNBC that he would borrow, and if the economy crashed, he would “make a deal.”

A few weeks later, Trump walked away from his comments about debt, telling CNN’s Chris Cuomo he was misquoted.

“First of all, you never have to default because you print the money,” he said on CNN’s “New Day.”

Verdict: True — Trump claimed he would negotiate down the debt.

Clinton on Trump ‘rooting’ for the housing crisis

Discussing financial progress since the Great Recession, Clinton accused Trump of rooting for the housing crisis.

“He said, back in 2006, I hope it does collapse, because then I can go in and buy some and make some money,” she claimed.

The Democratic nominee based her claim on an audiobook released by now legally troubled Trump University in 2006. The audiobook, titled, “How to Build a Fortune,” includes an interview between Trump and marketing consultant Jon Ward.

Clinton ended her comments on Trump’s past remarks by noting the accuracy of his 2006 prediction saying, “Well, it did collapse.” Trump responded, “That’s called business, by the way.”

As CNN predicted in May, Trump’s comments from before his run for office did come back to haunt him.

And that’s called politics, by the way.