A New Jersey Transit train plowed through a major station in Hoboken during Thursday morning’s rush-hour commute, killing at least one person and injuring more than 100 others, officials said.

Witnesses said the train overran its stopping point, slammed into a bumper block, went airborne and hurtled through a passenger concourse at about 8:45 a.m. at the terminal, one of the busiest transit hubs in the New York area.

The person killed was standing on the platform and was struck by debris, New Jersey Gov. Chris Christie said. Later he told CNN’s Wolf Blitzer the victim was a 34-year-old woman from Hoboken.

Bhagyesh Shah, who rode in the back of the front car on his way to work, said the train didn’t appear to slow as it entered the station.

“The next thing I know, I’m on the floor. We are plowing through something … and when the train came to a stop, I could see the parts of the roof on the first car and some of the debris next to me,” Shah said.

Images posted on social media showed severe structural damage at the station, where part of the roof appeared to have collapsed. Witnesses described people helping bloodied passengers, some trapped by debris, from the packed front car.

The crash comes five years after more than 30 people were injured when a train overran its stop at the same station — which will be examined as investigators try to determine what caused Thursday’s crash, said Bella Dinh-Zarr, National Transportation Safety Board vice chairwoman.

Gallagher has been an employee of New Jersey Transit for 29 years, Snyder said. Authorities said earlier that Gallagher was treated and released from the hospital after the Thursday morning crash, and is cooperating with investigators. 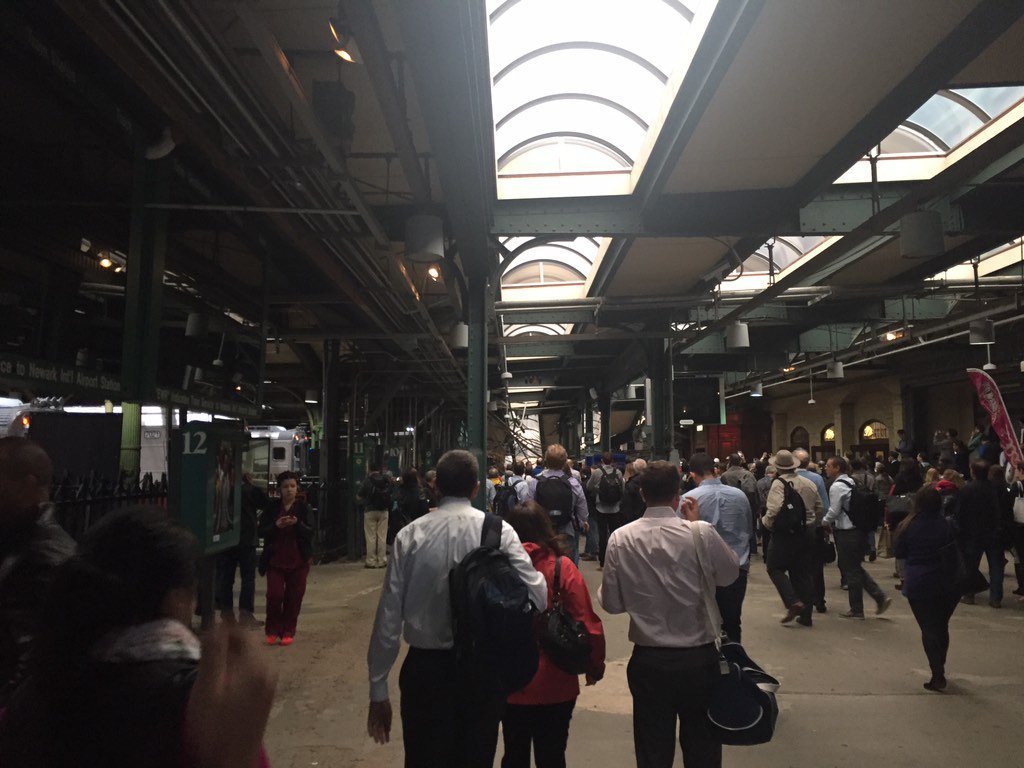 Car’s roof crushed down to the seats

The train — which Christie said had an engine pushing four passenger cars — was at the end of a 17-stop route that had begun more than an hour earlier in Spring Valley, New York. The Hoboken hub primarily serves the Lower Manhattan commuter market.

A New Jersey Transit worker at the station said he heard an explosion-like sound as the lead car, coming into the station fast, slammed into the bumper block, a device meant to halt trains that pass their stops.

“It went up and over the bumper block, through the depot … and came to rest at the wall by the waiting room,” worker Mike Larson said.

“It was going considerably faster than it should have normally been.”

Half of the first car was crumpled, and the roof crushed down to the seats, he said. The train should have stopped 10 to 20 feet before the bumper block, he said.

Some federal lawmakers said positive train control — a system that combines GPS, wireless radio and computers to monitor trains and stop them from colliding, derailing or speeding — might have helped in this situation. Dinh-Zarr, of the NTSB, said part of the focus of her agency’s investigation will be on positive train control and whether it could have prevented the crash.

Christie and New York Gov. Andrew Cuomo cautioned people to wait until investigations are completed before concluding PTC would have prevented this incident.

‘I guess it didn’t slow down’

Passenger Leon Offengenden said he was in one of the cars behind the lead car when the crash happened.

“The front car is essentially off the rails … into the building of the station, with the roof sort of collapsed around it,” he said.

“The lights went out and a few people screamed (when the crash happened).”

“I was sitting, but I couldn’t see the window. I didn’t notice that the train was going at an accelerated pace. It was just going,” Offengenden said.

“Now, looking back, I guess it didn’t slow down. It definitely didn’t slow down. There (were) no brakes. All of a sudden, it just crashed. Something happened obviously. … It’s the same feeling as when you get in a car crash.”

He said he left the train and “saw a man who had blood just running down his arm. He was wearing a suit and blood was just gushing.”

‘It kept going and going’

Shah, one of the passengers, said people were thrown around upon impact.

“I was hoping the train would stop now, but it just didn’t stop. It kept going and going. At the end of it, it felt like eternity.”

“There was a woman. … She was pinned under … debris next to the first car. There were seven to eight people that tried to pick that (debris) up.”

“I saw an old man, too, who had head injuries, trying to get out of the first car.”

Rail service was suspended in and out of Hoboken into the afternoon as a result of the crash, which happened on a cool day with overcast skies.

New Jersey Transit train service will be suspended indefinitely, until the damage can be assessed and repaired.

Engineers determined that the structural integrity of the potion of the station that serves PATH trains is intact, Hammer said.

CNN producer Paul Murphy described a chaotic scene at the station, with the arrival of first responders from various agencies, sirens blaring and nearby streets cordoned off.

“There’s only one option for people who don’t have a car to get out of Hoboken right now, and that’s the bus,” Murphy said. “The bus lines are very, very long, and many people are on the phones with work, saying, ‘I’m not coming into work today or I’m going to work from home.'”

New Jersey Transit is the “third largest provider of bus, rail and light rail transit in the nation.” Roughly 15,100 people board through the Hoboken station each weekday, according to the agency.

In August, Christie signed a bill prohibiting an engineer from operating a New Jersey Transit train if his or her driving privileges are suspended or revoked due to a conviction for driving under the influence of alcohol or drugs or a related offense.

The law came after an engineer was found to have lost his license for 10 years due to DUI convictions.