ODU to retire Bazemore’s No. 24 this season 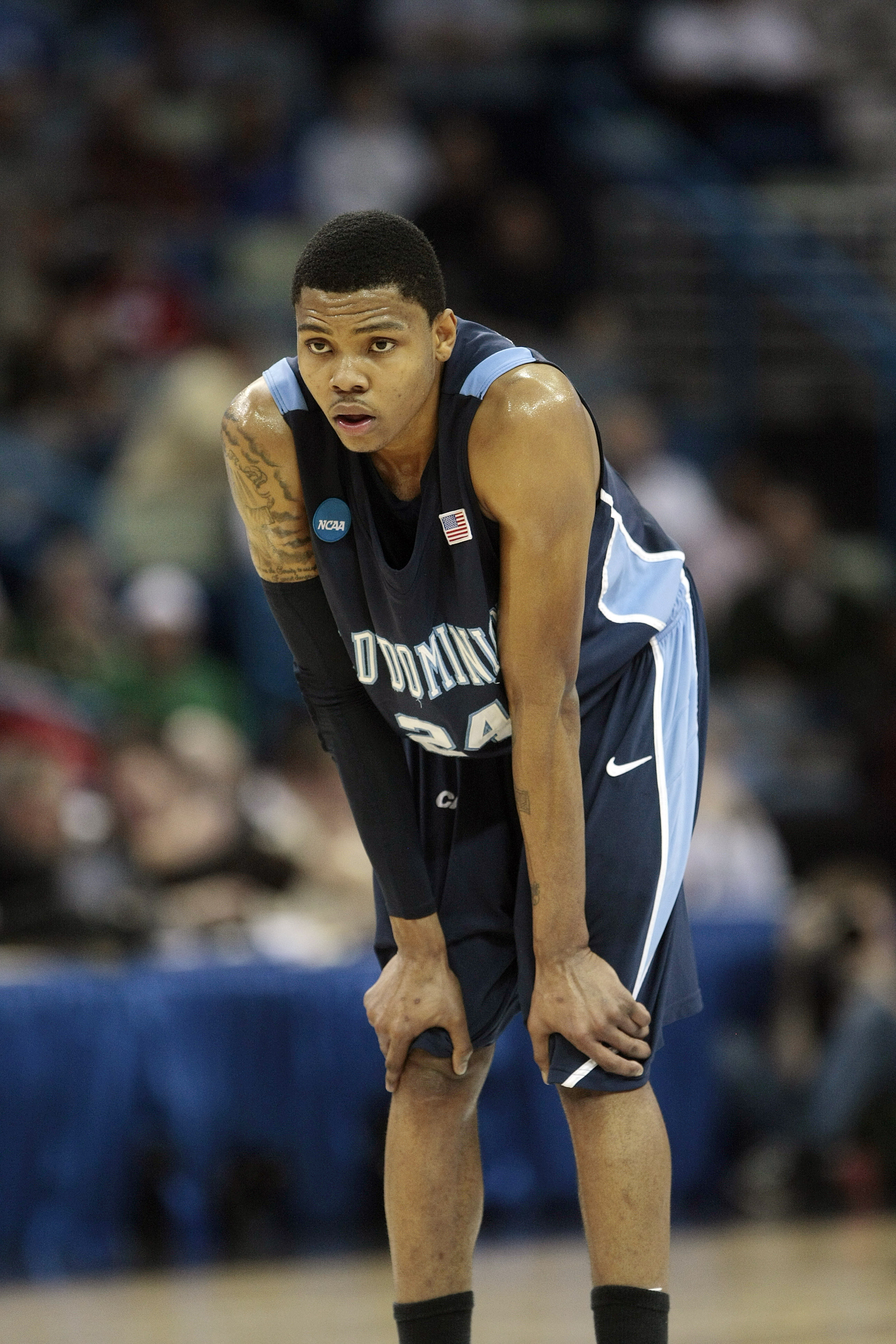 NORFOLK, Va. – Kent Bazemore, a 6’5″ shooting guard from Kelford, N.C., will become the eighth Old Dominion University men’s basketball player to have his jersey retired on Dec. 10, 2016, when the Monarchs take on VCU at the Ted Constant Convocation Center, as announced by ODU Director of Athletics, Dr. Wood Selig on Friday afternoon.

“Wow, this is truly an honor to join such a pristine list,” said Bazemore. “This is an amazing day. I really appreciate everything Old Dominion has done for me. I will always be a Monarch for life. I am speechless right now.”

Bazemore helped lead Old Dominion to back-to-back CAA Championships in 2009-10 and 2010-11. In the First Round of the 2010 NCAA Tournament, Bazemore and the Monarchs upset No. 6 seeded Notre Dame in New Orleans, giving ODU its first NCAA Tournament win since 1995.

“Kent was one of the most exciting players to ever wear an ODU basketball uniform,” said Selig. “Kent possessed a unique quality of being able to ignite the Ted with a spectacular defensive play or monster dunk that would keep the arena buzzing the entire game. He was a Dean’s List student, earning his undergraduate degree as a double major while at ODU. Kent is modeling the way for current and future ODU Monarchs in all sports, as he continues to be one of our best ambassadors for ODU and Monarch Basketball. Kent is most deserving of this highest athletic honor.”

Bazemore will join Leo Anthony, Joel Copeland, Kenny Gattison, Dave Twardzik, Wilson Washington, Mark West and Odell Hodge as the only ODU men’s basketball players to have their jerseys retired. The last player to have his retired was Hodge on Feb. 13, 2010 at halftime of the George Mason game.

“I am extremely proud of Kent Bazemore,” said ODU Assistant Coach John Richardson, who recruited Bazemore. “The retirement of his jersey is very personal to me, as well as his family. Kent and I are from the same hometown and for someone from Kelford, North Carolina, who had the will and skill to navigate his way to the Atlanta Hawks has given the kids of Bertie hope to be whatever they want to be. Kent’s basketball development at ODU was instrumental in providing him the opportunity to live his dream. Also, he was an outstanding student as he was awarded two degrees. Kent is a Monarch for life; he loves Old Dominion University. I am sure that his teammates and coaches from his time here are extremely proud. This is a well-deserved honor and I am beaming with pride.”

When Bazemore first arrived in Norfolk, he redshirted the 2007–08 season. As a freshman in 2008–09, Bazemore was a key rotation player for the Monarchs, averaging 4.5 points and 3.1 rebounds per game, as ODU won the 2009 College Insider Tournament. As a sophomore, he moved into the starting lineup and was instrumental in ODU claiming the Colonial Athletic Association regular-season and tournament championships, averaging 8.4 points, 3.4 assists (led team), 4.2 rebounds and 1.9 steals (led team) per game. He was named to the CAA All-Defensive Team that season.

As a junior, Old Dominion repeated as CAA Tournament champions, earning another automatic bid to the NCAA tournament in 2011, this time losing a heartbreaker to eventual national runner-up Butler, 60-58. For 2010-11, Bazemore averaged 12.3 points, 5.1 rebounds, 2.8 assists and 2.2 steals (led team) per game on his way to being named the best defensive player in the country. As a team captain in his final season at ODU, Bazemore averaged 15.4 points (led team), 6.1 rebounds and 3.1 assists (led team) and 2.1 steals (led team) per game.

“I am really happy for Kent, this a great honor and a well deserved honor for a guy that obviously had a fantastic career as an ODU Monarch,” said ODU head coach Jeff Jones. “I especially appreciate what Kent has done for the program since he left; he truly has been ultra-supportive and encouraging. With his notoriety and what he has done in the NBA, it just makes a huge difference and we are really appreciative of his contributions and again, very happy for him to have this honor bestowed upon him.”

Bazemore, a Dean’s List recipient, graduated from Old Dominion in May of 2012 as a double major, with Bachelor of Science degrees in Human Services, as well as Criminal Justice.

In 2012, Bazemore went undrafted, before the Golden State Warriors added him to their 2012 Las Vegas Summer League team, which included Draymond Green, Harrison Barnes and Klay Thompson. Bazemore averaged over 8 points per game, and the Summer Warriors went undefeated. The Warriors signed Bazemore to a rookie deal shortly after Summer League ended.

The Warriors traded Bazemore to the Los Angeles Lakers in February of 2014. He played 28 minutes per game and averaged 13.1 points, 3.3 rebounds, 3.1 assists and 1.3 steals. He started 15 of 23 games, before suffering a season-ending injury to his foot.

The Atlanta Hawks signed him to a two-year deal on September of 2014. After constant improvements and averaging 11.6 points, 5.1 rebounds, 2.3 assists and 1.3 steals per contest as a starter, the Atlanta Hawks re-signed Kent, this time to a four-year $70 million contract. Through four seasons in the NBA, the left-handed guard has scored 1,788 points, hauled down 740 rebounds, dished out 362 assists and compiled 210 steals.

“Kent is always representing the University at the highest level possible,” said former Monarch teammate and current Assistant Director of Athletic Development for ODAF, Darius James. “As his former teammate, I am extremely happy for him. He is definitely someone who put in the work to be where he is today, always doing whatever it takes to win and get better. He has accomplished a lot over the years, on and off the court, and I am sure there is much more to come.”