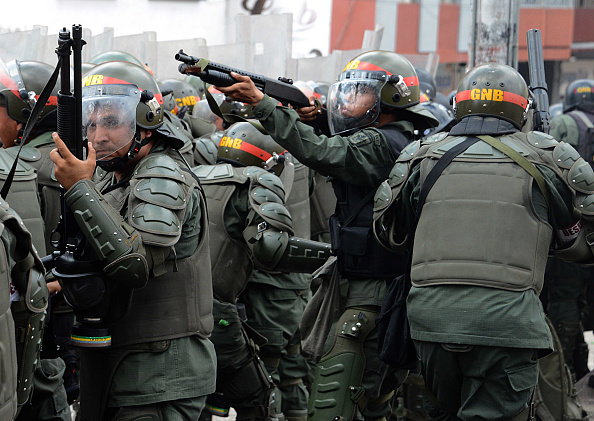 Anti-government demonstrators pushing for a presidential recall vote in Venezuela had a message as they marched Wednesday: We won’t take no for an answer.

If officials don’t resume halted referendum proceedings, opposition leaders vowed to march to the presidential palace next week and make sure President Nicolás Maduro hears them.

“Why aren’t we going today? Because we also have to give a chance and rights to all of our Venezuelan brothers,” opposition leader Henrique Capriles said as he announced the plan to throngs of supporters who packed a Caracas highway.

Demonstrators in favor of and against the government blocked streets. The opposition said 120 people were hurt and 147 arrested in protests across the nation. CNN could not verify Capriles’ claim.

The protests come days after officials halted the opposition’s recall vote drive, ruling that there were multiple cases of voter identity fraud.

The controversial move has fueled mounting tensions between the government and the opposition that show no sign of slowing.

Each side accuses the other of staging a coup in the country, which is edging closer to a breaking point as it faces a recession, soaring food prices and broken hospitals.

On Wednesday, demonstrators said they were determined to make their voices heard.

“If they don’t want to let us choose in an electoral voting process, they are going to have to listen to us as we march in the streets peacefully, overwhelmingly, and tirelessly until they meet the demands of the Venezuelan people,” said Hasler Iglesias, a student protest leader in Caracas.

As protesters converged at meeting points across the capital and headed for a major highway, Maduro convened a National Defense Council meeting, slamming the opposition while calling in nationally televised remarks for dialogue and peace.

The Vatican is set to mediate talks between the opposition and the government. But some say they are skeptical.

On the streets of Caracas, Iglesias dismissed calls for dialogue Wednesday, saying talks only make sense if the Venezuelan government will listen and respond to the opposition’s demands.

“Dialogue cannot be used as blackmail or an oxygen tank to give more time to a government that each day has less time left,” he said.

Protesters also marched in cities across the country, sharing photos on social media that showed them wearing the colors of Venezuela’s flag.

Organizers of Wednesday’s protests criticized officials for shutting down some metro stations in Caracas, accusing them of trying to block demonstrations.

On Twitter, opposition leader Henrique Capriles pointed to the closures as he tried to fire up support. The Caracas Metro said the stations were closed to “safeguard users, personnel and installations.”

The protests drew a number of prominent opposition figures, including Lilian Tintori, the wife of jailed opposition leader Leopoldo Lopez.

Maduro: ‘We will continue our pursuit of victory’

Dialogue is necessary, Maduro said, accusing the opposition of steering clear of talks for nefarious reasons.

“They don’t want dialogue because they want a coup,” he said.

The National Assembly voted Tuesday to ask Maduro to appear for questioning next week so it can determine whether to recommend he be removed from office by the nation’s Supreme Court. The Assembly is controlled by opposition lawmakers, while much of the courts are Maduro supporters.

Opponents launched the drive to recall Maduro, but have been stymied.

And a series of recent events have deepened tensions in Venezuela’s volatile political landscape:

• On Sunday, opposition legislators approved a measure that declared “there had been a breakdown of constitutional order and a continued state of coup led from the highest level of government by President Nicolás Maduro”

• But then, government supporters stormed the assembly building Sunday afternoon, opposition legislators told CNN. They stole cell phones from opposition lawmakers, threw punches and vandalized the building before being persuaded to leave

The movement against Maduro, who succeeded the charismatic firebrand President Hugo Chavez, has grown as Venezuela continues to battle an economic crisis and massive shortages of food and medicine, as well as factory shutdowns and blackouts. Maduro holds firm that efforts to remove him from office won’t succeed, while his opponents say he has violated the country’s constitution.

As well as the legislative action, protesters have taken to the streets. Last month, demonstrators wore white and waved flags as they packed the streets of the capital, Caracas, to blame Maduro and his government for the country’s woes.

Opposition leaders dubbed the demonstration “The Takeover of Caracas” and said more than 1 million people took part. The state-run news agency AVN said there were about 30,000 people.

Timing is key. If there’s a recall vote to oust Maduro this year, there would be new elections. But if the vote happens in 2017, the vice president would take the reins.

If there’s no recall vote, Maduro’s presidential term is set to end in 2019.