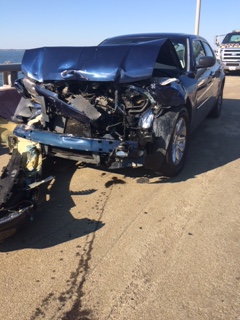 The incident occurred on the Hampton Roads Bridge Tunnel west of 15th View.

Shortly before 1 p.m., a trooper conducted a traffic stop on a wanted subject out of Virginia Beach and requested assistance.

With lights and sirens, Trooper J. Hagwood arrived shortly after on the scene – stopping on the right shoulder in front of the incident.

While stopped on the right shoulder, traffic began to slow down. The driver of a 2006 Chrysler 300, traveling in the far left lane, struck a 2007 Chevrolet Equinox driving in front of it, swerved, and then struck a 1997 Acura 300.

The 1997 Acura 300 was then pushed into the rear of the trooper’s patrol vehicle.

The driver and passenger in the Chrysler 300, the driver of the Acura 300 and Trooper Hagwood suffered minor injuries.

The driver of the Chrysler 300 was charged with reckless driving and driving while suspended.

Other charges are also pending.