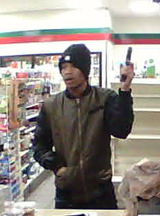 NORFOLK, Va. – Detectives are asking for the public’s assistance with identifying an armed robbery suspect.

The man was captured on surveillance footage on Saturday around 5:45 a.m. at the 7-Eleven located in the 5800 block of E. Virginia Beach Blvd.

The suspect was armed with a handgun and demanded money.

The employee complied with the man’s demands and he fled the scene on foot before police got there.

He was last seen wearing a black beanie hat, a brown and black jacket, and dark pants.

No one was reported injured in this incident.

If you have any information that may help police with this case call the Crime Line at 1-888-LOCK-U-UP.