NEAR MEDELLIN, Colombia – In the mountains of Colombia, rescuers combed wreckage for survivors.

Outside a stadium in Brazil, fans who thought they’d be cheering for their favorite soccer team came to mourn.

These were the somber images Tuesday after a deadly plane crash outside Medellin, Colombia.

The Avro RJ85 was en route Monday night from Santa Cruz, Bolivia, to Medellin when it crashed near Rionegro, Colombia, with 77 people on board, civil aviation officials said.

Players, coaches and invited guests from Brazil’s Chapecoense soccer team were onboard the charter flight. So were more than 20 journalists on the way to cover what was supposed to be a heartwarming chapter in a Cinderella story for a team of unlikely champions.

The soccer club, which has risen the ranks in Brazilian soccer and has a devoted national fan base, was set to play in the first leg of the South American Cup finals Wednesday.

Now hundreds of heartbroken fans have gathered at Arena Conda in the team’s hometown of Chapeco, Brazil.

And authorities are investigating what caused the crash, searching the remote site for victims, survivors and evidence. Chapecoense is sending a seven-person delegation of doctors and legal experts to Colombia. “Only after their arrival will we be able to confirm the facts of this tragedy,” the team said on Twitter.

‘We are praying for everyone’

Among them: defender Alan Luciano Ruschel.

“We are praying for everyone who has not yet been rescued, and for their families,” Amanda Ruschel wrote. “It is a complicated and difficult situation. Only God can give us strength.”

The plane declared an emergency between the municipalities of La Ceja and La Union, according to Colombian aviation officials. The crash occurred in an area called Cerro El Gordo near Medellin, officials said.

Images of the crash show what appear to be damaged parts of the plane.

Tattered debris emblazoned with the Chapecoense club’s logo was photographed at the crash site. 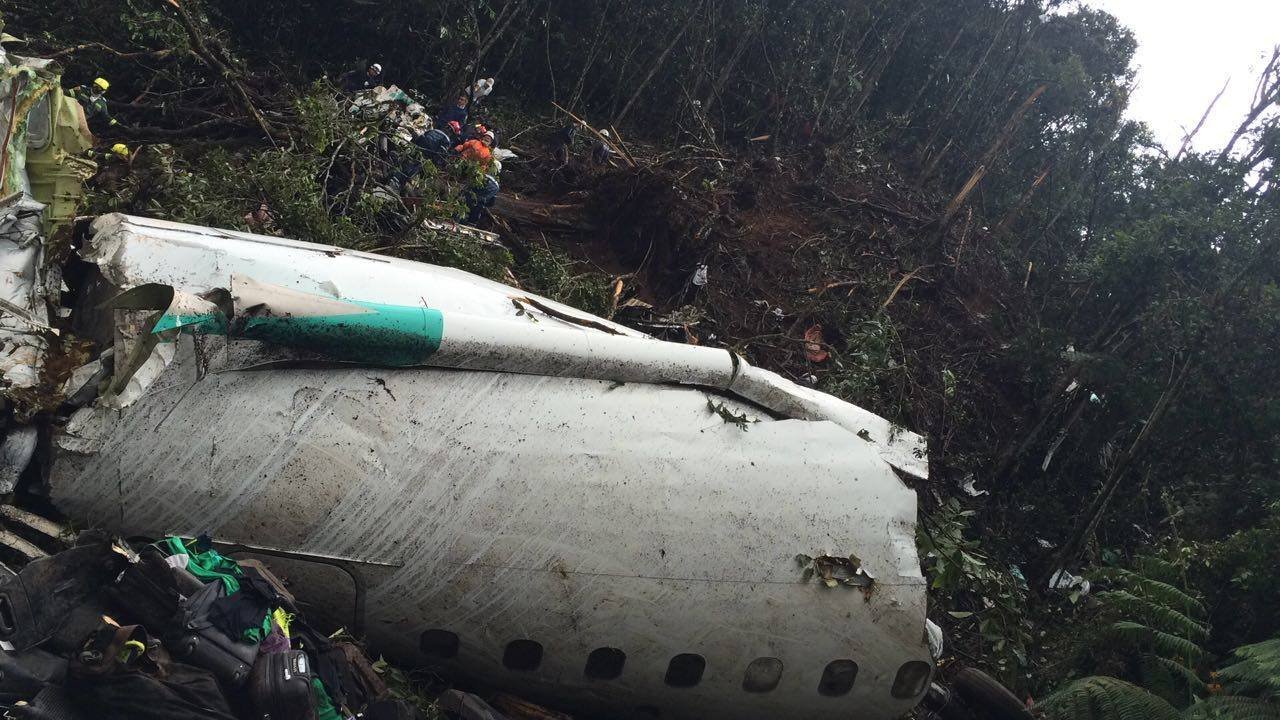 Satellite images show that scattered showers and thunderstorms had moved across the region over the previous 12 hours — though no big storms were nearby, according to CNN meteorologist Michael Guy.

There likely would have been turbulence in the region due to intermittent thunderstorms and winds from around the mountains in the region, Guy said.

A statement from nearby Jose Maria Cordova airport said the accident site could only be accessed by land because of weather conditions.

The Colombian air force had to abort a mission to the accident site due to inclement weather, according to Colombian officials.

From Cinderella story to nightmare

Chapecoense was set to play the Colombian club team Atletico Nacional in the first leg of the South American Cup finals Wednesday.

The team, which is ninth in Brazil’s Serie A league, has surprised many with its performance in the tournament this year — ESPNFC billed its semifinal contest as a David versus Goliath match.

Chapecoense had dreamed of winning the prestigious cup, Plinio David de Nes Filho, the chairman of the team’s board, told Brazil’s TV Globo on Tuesday.

“The dream was over this morning,” he said, tearing up as he told the network of the last time he saw the players.

“Yesterday morning I was saying goodbye to them,” he said. “They told me they were going in search of the dream, to make this dream a reality.”

Six journalists from Fox Sports Brazil were among the 20 people aboard the aircraft on their way to cover the game, the network said.

“We express our solidarity and stand with the families of our colleagues from Fox Sports Brazil and of the players for the Chapecoense Club who perished in this tragedy,” Fox Sports said.

The lesser-known Chapecoense club was founded in 1973 and had steadily risen up the ranks in recent years.

Team officials liked to say that it succeeded due to good management and a strategic vision, said Plus55, a Brazilian news site.

“Few remembered the name of this forgotten team,” CONMEBOL, the governing body for soccer in South America, said of Chapecoense. “Now the whole continent knows it.”

The team, whose stadium wasn’t even big enough to host a final by CONMEBOL regulations, was vying to become the first Brazilian club to win the South American Cup final since 2008.

As word of the crash spread, Brazilian soccer great Pele was among the many athletes and fans expressing their condolences Tuesday.

“The Brazilian football family is in mourning,” he wrote on Twitter. “This is a tragedy. I send my condolences to the families of the deceased. Rest in peace.”