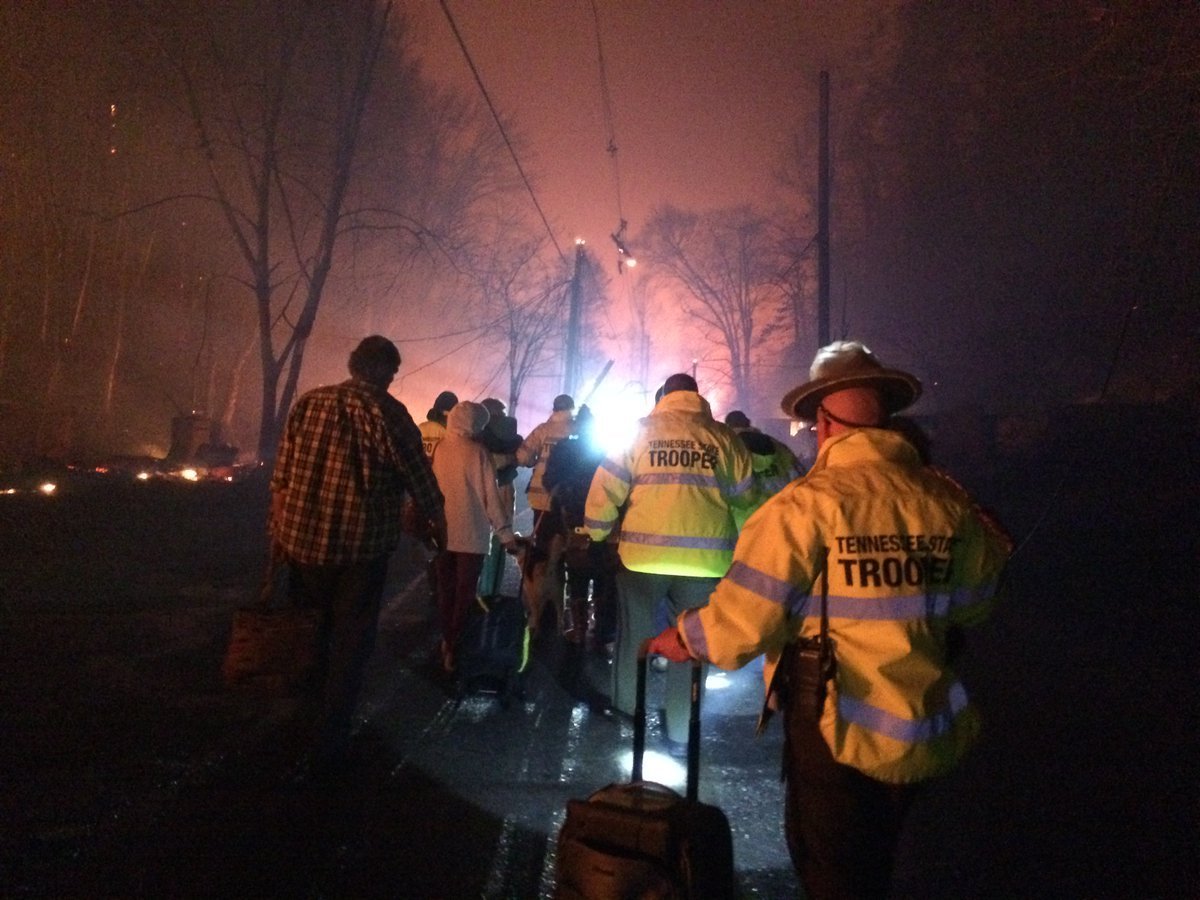 Fire Chief Greg Miller told reporters he does not know whether more than three people died in raging wildfires. “We have not been able to get into all the areas.”

Officials said they are not certain when residents will be able to return to evacuated neighborhoods in Gatlinburg and neighboring eastern Tennessee communities. They’re concerned about the threat of additional wildfires overnight.

Wildfires damaged or destroyed hundreds of buildings in and near eastern Tennessee’s resort towns of Gatlinburg and Pigeon Forge in a dizzying 24 hours, officials said.

Responders still are trying to evaluate the destruction caused by the flames that spread with little warning from the Great Smoky Mountains.

“Ash was raining down like snow,” said Jonathan Frye, who evacuated his home Monday night with his wife and children.

Frye is a chef at Dollywood and lives just a few miles from the park. He said the smoke was so thick it was hard to see the car in front of him as he drove away from the fires, which he could see from his doorstep. His home was not damaged.

Some major tourist attractions appeared to have been spared by the fires that spread to the communities Monday evening, and Gatlinburg’s fire chief said the worst appeared to be over Tuesday morning.

But many homes and businesses in the Gatlinburg area have been destroyed by the fires, which strong winds pushed from the wooded mountains into the more-inhabited areas Monday afternoon, authorities said. And officials were working to assess how much has been damaged in a vacation hub now enveloped by dingy smoke.

Wildfires have burned in parts of the Southeast for weeks, fueled by the region’s worst drought in nearly a decade.

• More than 14,000 residents and visitors are believed to have been evacuated from Gatlinburg alone, the Tennessee Emergency Management Agency said Tuesday morning. Evacuations also have been ordered in other communities, including Pigeon Forge.

• About 12 people were taken to hospitals, mostly with non-life-threatening injuries, Gatlinburg Fire Chief Greg Miller said. Three with burns were taken to the Vanderbilt Medical Center in Nashville, the hospital said.

• Among the hundreds of structures destroyed in the area, more than 100 were in Gatlinburg, Mayor Mike Werner said Tuesday morning. That includes a 16-story hotel and an apartment complex, TEMA said. More than 150 other structures in the county are believed damaged or destroyed.

• Werner said he believes his house is among those lost. “But things can be rebuilt. Our downtown’s intact, and that’s really great for our economy” and the city’s future, the mayor said. “We will rebuild, and we will remain the premier resort community that we are. … It will be OK.”

• Miller said about 14 active structure fires remained in the city Tuesday morning, but because winds have died down, “the worst is definitely over with.”

• Fires were at the edge of the Dollywood theme park in nearby Pigeon Forge on Tuesday morning, officials said.

• All 1,500 animals at Ripley’s Aquarium of the Smokies in Gatlinburg are safe, the aquarium said on Twitter. Staff members were forced to evacuate from the attraction on Monday.

“Everything was like a perfect storm,” Cassius Cash, superintendent of the Great Smoky Mountains National Park, told CNN affiliate WATE. Rain fell Monday night, but it was too late and too little to prevent damage as the region felt wind gusts in excess of 80 mph.

A major attraction, the Ober Gatlinburg ski area and amusement park that overlooks the city, appeared to be spared. But on a road leading to the resort, what used to be homes have been reduced to burned-out husks.

Only the bricks remained intact — and only in places. The insides have been eaten away by the fire.

The cars parked outside have suffered the same fate — their paint burned to ash, their tires melted away. Uprooted trees leaned on power lines. Smoke turned the sky a bleak gray.

“It is absolutely devastating,” said Mark Nagi of the Tennessee Department of Transportation, who posted footage of the devastation on his Twitter feed.

“It’s all gone, guys,” Turner said of one section of units on the bottom part of the property. “This got so hot, it melted the … pavement.”

If you are able, ‘evacuate immediately’

Authorities issued evacuation orders for Gatlinburg and nearby areas, including the north end of Pigeon Forge: “Nobody is allowed into the city at this time. If you are currently in Gatlinburg and are able to evacuate … evacuate immediately.”

Pigeon Forge is home to Dollywood, the theme park owned by singer and actress Dolly Parton. At Dollywood, officials with the Great Smoky Mountains National Park evacuated guests from its resort and cabins as flames approached the area.

Parton said in a statement that she was heartbroken about the fires and was “praying for all the families affected.”

“It is a blessing that my Dollywood theme park, the DreamMore Resort and so many businesses in Pigeon Forge have been spared,” she added.

Schools in Green, McMinn and Sevier counties were closed Tuesday, the agency said, and about 12,000 people in Sevier County were without power as of Tuesday morning.

Several evacuation shelters opened and about 1,300 people stayed overnight at the local community center and park. Shaken residents, some needing oxygen after inhaling so much smoke, huddled with each other at the shelters.

“We watched a building go down in flames to the right of us,” said one tearful evacuee, who was rescued by firefighters.

Despite evacuation orders, some people — including guests at one Gatlinburg hotel — could not safely leave the area as the fire advanced Monday night.

“I just see fire everywhere,” said Logan Baker, a guest at the Park Vista Hotel. The fire swept up to the hotel parking lot, he told CNN affiliate WATE. He posted videos of the hotel doors and windows glowing from the fire looming outside.

Baker was among dozens of guests who couldn’t leave because falling trees engulfed in flames had blocked the only road out.

The fire had not reached the hotel, but smoke had permeated the building, making it hard to breathe, he said. Guests stood in the hotel lobby Monday night with masks over their faces.

Up to a half-inch of rain fell Monday night into Tuesday morning, and that might be enough to “virtually stop the spread of the fires,” said Bill Gabbert, managing editor of WildfireToday.com and former executive director of the International Association of Wildland Fire.

But it wouldn’t be enough to extinguish them, he said. There still will be smoldering logs and burning areas protected by trees, and it will take a thorough soaking to put the fires out.

What could help more is a batch of storms expected to hit the area early Wednesday into Thursday. They could drop 2 to 3 inches of rain, CNN Meteorologist Dave Hennen said.