A fourth person has been found dead as a result of this week’s wildfires in Sevier County, Tennessee, county Mayor Larry Waters told reporters Wednesday morning.

The fourth body was found Wednesday at a burned motel, a different official said at a news conference.

Forty-five people were treated at a hospital as a result of the fire, Waters said.

James Wood’s mother was telling him on the phone that the wildfire that had roared into Gatlinburg had ignited her home.

Then he lost the connection. He hasn’t heard from his mom, Alice Hagler, since that Monday night.

Hagler is one of several people said to be missing after wildfires scorched roughly 15,000 acres in a resort-heavy area of eastern Tennessee, showered residents with embers and forced tourists to evacuate from their accommodations. 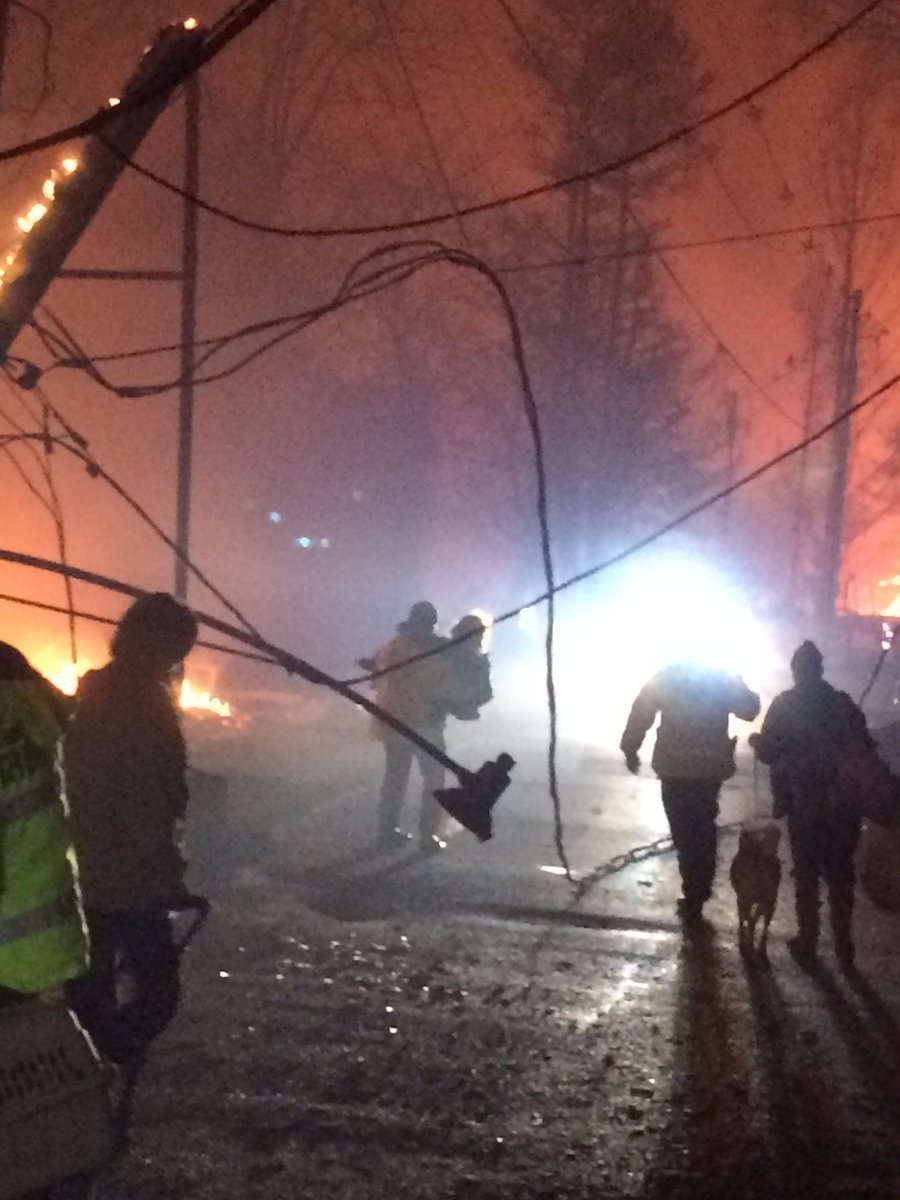 The fires, which spread with little warning Monday from the Great Smoky Mountains into inhabited areas in an around the resort towns of Gatlinburg and Pigeon Forge, have left at least three people dead and 45 other people were taken to hospitals, officials said. More than 250 buildings in the county are said to be damaged or destroyed.

“We had been talking for several hours on and off,” Wood told CNN affiliate WATE on Tuesday night. He had been living with his mother at her Gatlinburg house for the last five months but wasn’t home that night.

“She called me at 8:30 (p.m.) and said the house was on fire. I told her to get out immediately. We got disconnected and I have not been able to get in touch with her since,” said Wood.

Hagler’s relatives say they hope she might be taking shelter with someone and just hasn’t been able to make contact. It’s a hope echoed by several other families who say their loved ones in the Gatlinburg area are missing.

“Our search and rescue teams are going out house by house,” Sevier County Mayor Larry Waters told CNN on Wednesday. “There’s a few areas that we were unable to get to on Monday night because of the swift nature of the firestorm … and we’re finishing those up today.

“Right now, search and rescue is our main challenge.”

Some fires continued to burn Wednesday morning, and authorities continued to block off Gatlinburg, from which about 14,000 residents and tourists had been evacuated Monday.

The area could be helped by up to 2 inches of rain expected Wednesday into Thursday. But the stormy weather could also cause problems: Lightning strikes and winds — gusts up to 30 mph are possible Wednesday — could spark more fires, and the downpour could prompt flash flooding.

The fires that reached Gatlinburg began days earlier on a trail in the mountains 10 miles south of the city, National Park Service spokeswoman Dana Soehn said. But strong winds that began Sunday helped the fire spread into the Gatlinburg area on Monday.

Wildfires have burned in parts of the Southeast for weeks, fueled by the region’s worst drought in nearly a decade.

Some major attractions such as the Ober Gatlinburg ski area and amusement park survived, but plenty of homes and other businesses were destroyed, and Gatlinburg residents have yet to be allowed back into the city to assess the damage.

While they wait, responders scramble to check more buildings, and families hope for news of the missing.

‘I thought she’d be standing in the driveway’

Michael Reed is desperate to find out what happened to his wife and two daughters, from whom he was separated on Monday night.

Reed and his family were in their Gatlinburg-area home when word spread that fire was burning out of control nearby. He and his 15-year-old son left in the family’s only vehicle to see what side of the road the fire was on.

He told CNN that he got stuck in traffic as people fled. He received a panicked call from his wife, Constance, 34.

Since then, he’s been in a shelter in Pigeon Forge, trying to find out what happened to Constance and their daughters, Chloe, 12, and Lily, 9. He said authorities haven’t been able to find them.

Also missing are Memphis couple Jon and Janet Summers, who were in the area with their three sons for a family getaway, CNN affiliate WMC reported.

The family appears to have been separated on Monday, and the three sons were found unconscious, WMC reported. They were in a hospital on Tuesday.

Evacuees said they were forced to leave with only the clothes on their backs as fire surrounded their homes.

Benzschawel said police banged on his door Monday night to wake him and his partner, Denise Bearden. The couple alerted their neighbor, who managed to escape with her dog.

Gatlinburg Fire Chief Greg Miller said three people in Sevier County died in separate incidents as a result of the fires. The names of those who died were not released.

The fire destroyed a number of structures at Gatlinburg’s Westgate Smoky Mountain Resort & Spa. Chris Turner, who works at the resort, posted video of the damage to Facebook — smoke drifted from burned-out vehicles and the buildings’ charred remains.

“The fires are still burning (in the area) … somewhat,” he told CNN on Wednesday.

Pigeon Forge is home to Dollywood, the theme park owned by singer and actress Dolly Parton. At Dollywood, officials with the Great Smoky Mountains National Park evacuated guests from its resort and cabins as flames approached the area. The park was not damaged.

In a statement, Parton said she was heartbroken about the fire damage and had been “praying for all the families affected.”

“It is a blessing that my Dollywood theme park, the DreamMore Resort and so many businesses in Pigeon Forge have been spared,” she added.

Several emergency shelters opened to accommodate evacuees. At one time, about 1,300 people were staying in six shelters in the area. Nearby, the Great Smoky Mountains National Park evacuated employees from the Elkmont and park headquarters housing areas on Monday.

Authorities said they remain uncertain certain when residents would be able to return to evacuated neighborhoods.

Some people — including guests at the Park Vista Hotel in Gatlinburg — could not comply with the evacuation orders as the fire advanced Monday night because falling trees engulfed in flames blocked the only road out.

Logan Baker, a guest at the hotel, was among dozens of guests who were stuck. The flames edged up to the hotel parking lot, he told CNN affiliate WATE.

Smoke permeated the building, making it hard to breathe, he said. Guests stood in the hotel lobby Monday night with masks over their faces.

Tennessee Gov. Bill Haslam, who flew over the scorched forest, said the region’s damage was “a little numbing” given how special it was for the entire state.

“Millions have families who have come here and will continue to come here,” Haslam said.