Oakland fire: 30 bodies found; 80% of building still to be searched 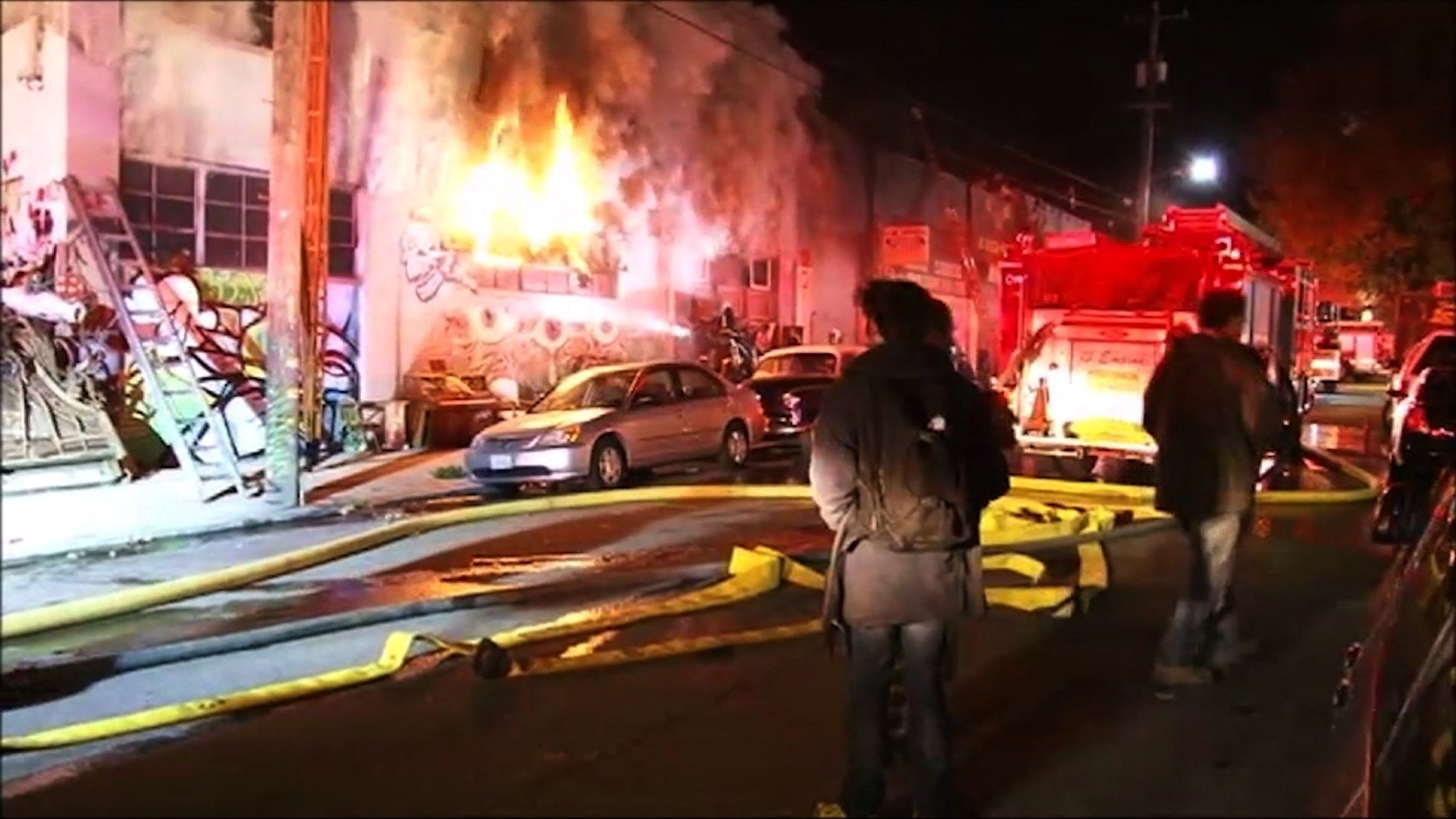 At least 30 people have been confirmed dead in a massive blaze that gutted a converted warehouse over the weekend during an electronic dance party.

The death toll is expected to rise as crews search the wreckage of the two-story building, which burst into flames late Friday night. Only some 20% of the building had been searched as of Sunday morning, authorities said.

“The number of lives lost will increase,” said Alameda County Sheriff’s Sgt. Ray Kelly. Authorities are asking the families of victims to preserve DNA information — found on such items as hairbrushes and toothbrushes — in clean paper bags.

The names of some victims could be released Sunday, he said. It could take weeks to identify other victims through DNA and dental records, Kelly said. He added that officials were also working with the transgender community to identify some of the victims.

Oakland battalion fire chief Melinda Drayton said the recovery search would be long and arduous as firefighters work to remove debris “literally bucket by bucket in a methodical, thoughtful, mindful and compassionate way.”

“We had firefighters with basically coveralls and buckets and shovels taking bits of debris out into the vacant lot to be loaded into dump trucks and removed to an off-site location,” she said.

Drayton, who has been with the department for 19 years, called it one of the most deadly fires in the city’s history. A fire in Oakland Hills in 1991 killed 25 people.

Even after firefighters put out the blaze Saturday, the building was deemed too unsafe for emergency responders to enter. Officials say the roof collapsed onto the second floor and then parts of that collapsed on to the first floor.

“It’s too unsafe,” Reed told CNN affiliate KRON-TV in San Francisco. “And not only that, there’s a lot of heavy wood from when the roof caved in that’s going to have to be removed.”

“One is falling debris,” James McMullen told CNN Sunday. “One is building collapse. One is the fact that you don’t want to disturb evidence that’s critical for the fire investigation… So the key thing is, you’ve got to move slowly and you’ve got to preserve the scene at the same time so that the fire investigators can in fact determine the area of origin and subsequently the point of origin (of the fire), and then determine the cause.”

Oakland Mayor Libby Schaaf called the fire an “immense tragedy” and pledged to get a “full accounting” that could be shared with the public as quickly as possible.

‘You could feel the heat of the flames’

Freelance journalist Sam Lefebvre said many people were just arriving at the warehouse when the fire started since the dance party was supposed to go very late. The warehouse is a “sort of live/work art space with a lot of old decorations and furniture,” Lefebvre told CNN. An electronic music DJ known as Golden Donna was scheduled to perform.

By the time John Evanofski arrived at 31st Avenue, giant flames lit up the night sky amid the billows of black smoke.

“You could feel the heat of the flames,” he told CNN. “Most of us were crying or unable to react. It was so hot and so terrible knowing that so many of us were still inside.”

A Facebook page created for the event became a forum for friends and family of the victims who posted frantic messages seeking information about loved ones. Those who survived shared their names to show they were safe.

For filmmaker and photographer Bob Mulé, the warehouse was both his home and his community.

The 27-year-old Mulé told CNN more than 20 people living in the warehouse, paid rent and were all involved in the creation of the space.

On Friday night, Mule stopped upstairs to listen to some music he described as a “very tame setting.” Afterward, he headed downstairs to work on a painting. From his studio, he smelled smoke.

After seeing the flames, Mulé ran to find a fire extinguisher. He found one, but could not open the pin. When Mulé turned back to save his camera and laptop, he spotted a fellow artist who called out for help. Mulé suspected that heavy-set artist had broken his ankle after falling from the second floor.

“I was pulling him out,” said Mulé, who sustained burns from the fire. “The flames were too much. There was too much smoke and … I had to let him go.”

The building is known as the “Ghost Ship.”

Darin Ranelletti, Oakland’s interim director of planning and building, told reporters Saturday the city had only approved permits for the building to be used as a warehouse — not for residences. City officials also had not signed off on a special permit for the event, Ranelletti said. In addition, firefighters found no evidence of sprinklers in the warehouse.

Last month the warehouse’s owners had received notification of city code violations for hazardous trash and debris, property records show. Officials had not yet completed an investigation into a November complaint for an illegal interior building structure.

CNN has reached out to the property owners for comment. Johnna Watson, Oakland police spokeswoman, said the building was not deemed a crime scene, but it was still early in the investigation.

Coping with a nightmare

More than 40 people gathered Saturday at the Chapel of the Chimes in Oakland for a vigil for victims. Organizers asked attendees to light a candle at the end of the service, saying flames caused pain and destruction “but tonight we light the flame for good and for peace.”

Now as loved ones seek answers, photographer Mulé must wrestle with the reality of losing a friend and grapple with his memories of the horrific night.

“I tried to save my friend but I had to leave him,” Mulé said.