2 arrested after dangling alongside #NoDAPL banner at Vikings game 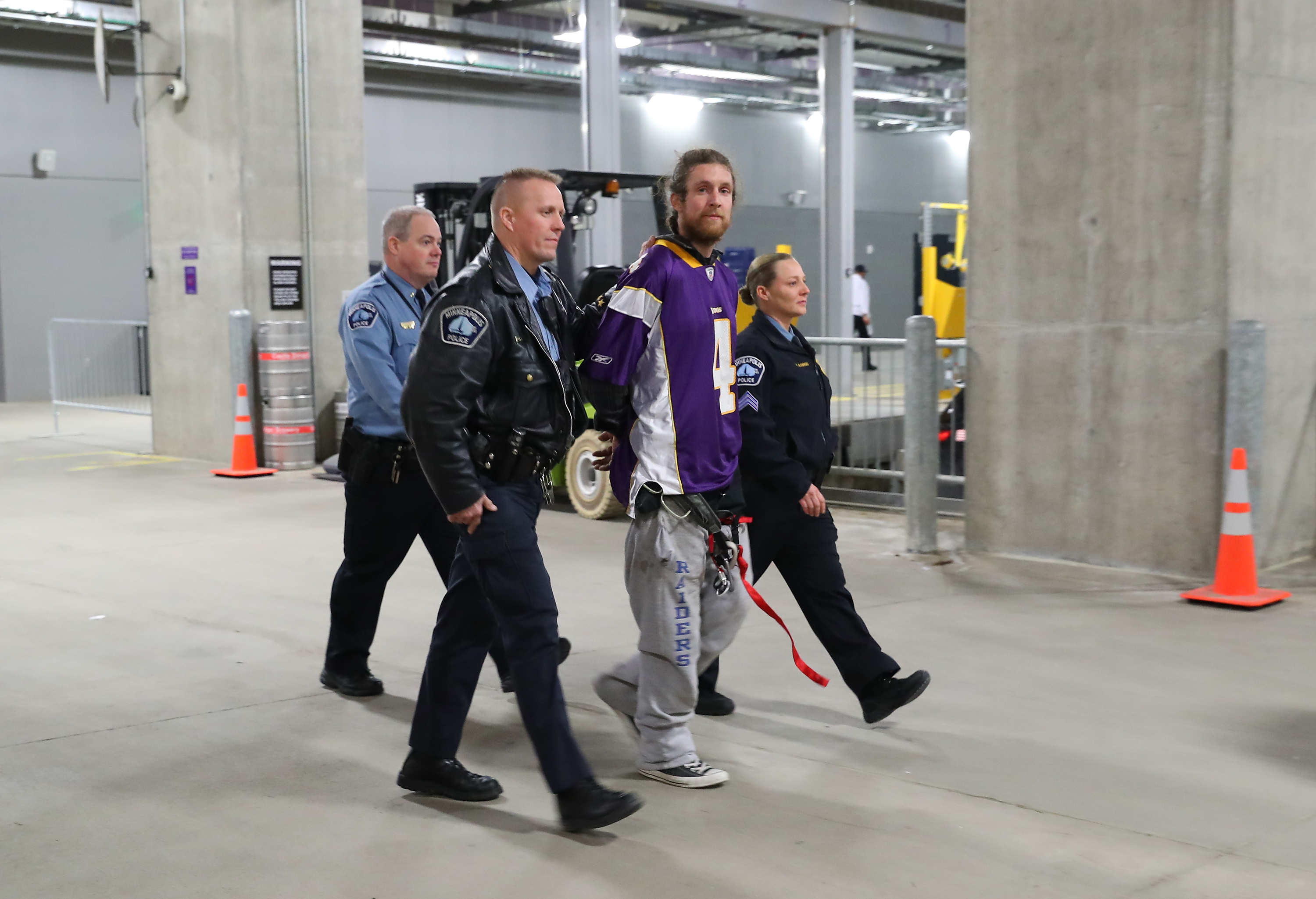 Two Dakota Access Pipeline protesters unfurled an anti-DAPL banner from the rafters high above the Minnesota Vikings game Sunday, but the game went on.

Looking at times like Spider-Man, the pair hung from what appeared to be rappelling gear alongside their banner during the first half of the Vikings’ matchup against the conference rival Chicago Bears. The banner included a U.S. Bank logo with the word “divest” written vertically down the banner. At the bottom, it said, “#NoDAPL.”

The Vikings’ home stadium in Minneapolis is named U.S. Bank Stadium, and the Minneapolis-based financial institution is reportedly a major investor in the controversial project.

The Minneapolis Police Department identified the climbers as Karl Mayo, 32, and Sen Holiday, 26.

“They climbed up a metal guardrail to climb up these big trusses that hold up the roof,” said Minneapolis police spokeswoman Sgt. Catherine Michal.

Those sitting beneath the dangling protesters were evacuated as negotiators tried to persuade the climbers to return to solid ground, she said.

Several fans posted images on social media, saying they noticed the banner in the first half of the game. Eric Biermann of Minneapolis told CNN he saw police gathering on the platform above banner.

Jordan Proctor of Cedar Falls, Iowa, said he noticed the banner after a friend texted him during the first half.

“It looked very official, so I don’t think many people noticed it at first,” he said. “People were watching and talking about it a lot at halftime.”

A reporter for CNN affiliate WCCO tweeted footage of the two protesters being taken into custody. Michal confirmed the arrests. The banner remained in the rafters.

Citing a police spokesman, WCCO’s David McCoy reported that the protesters demanded the media be present when they came down from the rafters. Once down, they were taken to jail and charged with trespassing, McCoy said.

A third person, identified by police as Carolyn Feldman, 27, was arrested on charges of obstructing the legal process, a misdemeanor, police said. It’s not clear what role, if any, Feldman played in the protest action.

At no point was the game interrupted, Michal said.

Local reporters said they received a news release from the climbers. In it, Holiday says, “We are here in solidarity with water protectors from Standing Rock to urge US Bank to divest from the Dakota Access Pipeline.”

“The pipeline is dangerous for any community it passes through,” said Karl Zimmermann, identified in the news release as the second climber. It’s not clear if Zimmermann and Mayo are the same person.

CNN has not been able to independently obtain the statement.

A spokesperson for Standing Rock Indian Reservation said the climbers were not affiliated with its protest.

U.S. Bank Senior Vice President Dan Ripley declined comment, as did the Minnesota Vikings. SMG, which operates the stadium, said only that it dispatched police and fire personnel to clear the seats below the banner and worked to get the protesters down safely.

The $3.7 billion DAPL will run almost 1,200 miles from North Dakota’s oil-rich Bakken Formation to Illinois, moving as many as 470,000 gallons of crude oil a day.

While its backers say it will represent an economic boon and make the country more self-sufficient from an energy standpoint, the Standing Rock Sioux tribe has sued the US Army Corps of Engineers, which approved the project.

The Sioux contend the project “threatens the tribe’s environmental and economic well-being, and would damage and destroy sites of great historic, religious, and cultural significance to the tribe.”

The statement reportedly sent by protesters says Sunday’s stunt was timed to coincide with a January 1 deadline for the pipeline, after which investors would be allowed to withdraw their contracts from the project if the pipeline had not been completed.

According to the myth-busting site Snopes, the Dakota Access vice president wrote in an August court document that if the project was not completed by Sunday, third parties would be able to cancel business contracts.

However, it’s not clear if any investors intend to terminate their contracts or what effect missing the January 1 deadline will have on the project, the site reported.