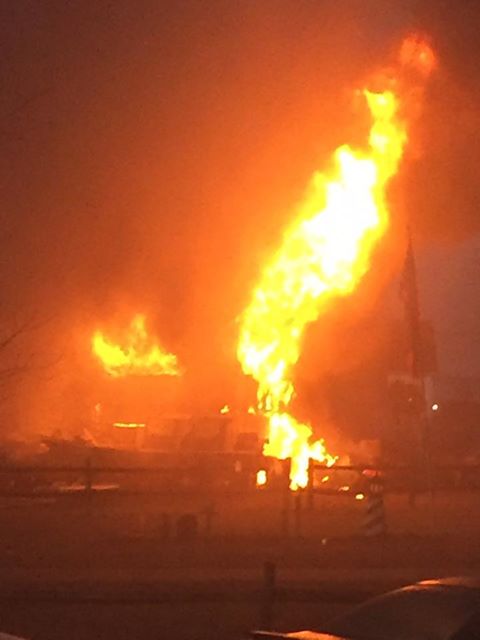 KNOTTS ISLAND, N.C. – A Knotts Island home in the 100 block of Wade Avenue was destroyed by a fire on Thursday morning.

The fire was reported to dispatchers at 6:42 a.m. and was initially reported as a heavily-involved garage fire.

Fire crews from both Currituck County and the Virginia Beach Fire Department responded to the scene.

Crews arrived to find heavy flames and smoke coming from the roof of the single-story home.

The fire has since engulfed the entire home, which will be considered a total loss.

Due to the remote location, VBFD had to set up a “drafting” operation to pull water from the ferry dock nearby to use in fighting the fire.

Thanks to smoke alarms, the family was able to escape the home safely. The four adults, two children and several pets were safely outside when fire crews arrived. They will be displaced as a result of the fire and the Red Cross has been dispatched to assist.

One Virginia Beach firefighter was injured and transported to the hospital with minor injuries and is expected to be okay.

The fire was declared ‘under control’ at 8:34 a.m. but crews remain on scene to ensure the fire is completely out.

A fire investigator has been sent to the scene to determine a cause.