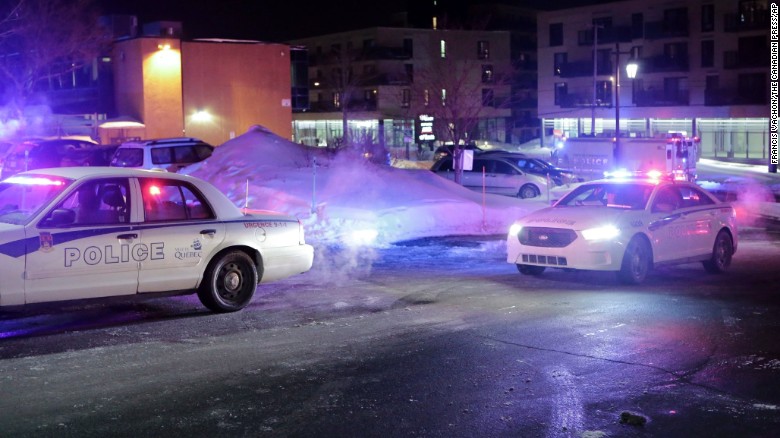 The suspect charged with gunning down six people in a Quebec City mosque was known for his far-right views and appeared to be attracted to the rhetoric of a French far-right politician, according to several news reports.

Authorities have not released a possible motive, but Canadian Prime Minister Justin Trudeau denounced the attack as an act of terrorism.

Witnesses said a gunman arrived at the Quebec Islamic Cultural Center during evening prayers Sunday and began firing indiscriminately into the crowd of men, women and children.

They were shot in the back, Mohamed Labidi, vice president of the mosque, told the CBC, CNN’s Canadian partner network.

The same mosque had been targeted last year when it received a wrapped pig’s head and a magazine with a pig on its cover, saying “Bonne Appetit (sic),” according to a post on its Facebook page. It alerted the police, which opened an investigation, the mosque said then.

News reports paint the shooting victims as men who came to Quebec in search of better lives. Many of them had young children.

Belkacemi was a professor in the School of Agricultural Sciences and Food at Laval University.

“Our university community is in mourning today. We cry for the death of an esteemed member of the faculty, a devoted man who was loved by his colleagues and students,” the school said in a statement posted on its website.

Soufiane was a longtime Quebec City resident of Moroccan descent. The father of three was a grocer and butcher and often helped guide newcomers to the provincial capital, according to the CBC.

“We chose this country so we could live peacefully,” Soufiane’s widow, Najat Naanaa, told The Globe and Mail newspaper. “But that’s not what happened.”

Friends told the paper that Thabti worked in a pharmacy and had two young children. One friend recalled that Thabti was one of the first people he met when he moved to the city a year and a half ago.

“He’s so kind; everyone loves him — everyone,” Abder Dhakkar said.

Mamadou Tanou Barry and Ibrahima Barry were inseparable friends who lived in the same apartment building, The Globe and Mail reported. The two men — not related — were both from the West African country of Guinea.

Hassane was a analyst-programmer for the Quebec government. The Algerian-born man was “a very peaceful, sensitive man,” co-worker Abderrezak Redouane told The Globe and Mail.

Canadian Public Safety Minister Ralph Goodale characterized Bissonnette as a “lone wolf” and said the attack would have been difficult to prevent.

Bissonnette lived near the mosque, the CBC reported. He was a student at Laval University in Quebec City, according to the school. He was unknown to police and had not been on any watch lists, authorities said.

Bissonnette followed several profiles that espoused right-wing ideologies on his Facebook page, including that of Marine Le Pen, the far-right leader of France’s National Front, according to the CBC.

“Cadets are not members of the Canadian armed forces, and they do not receive military training,” Keirstead said.

Police initially said two gunmen attacked the mosque but later concluded that the second person was a witness.

Shocked by the mosque attack, Canadians held candlelight vigils in Montreal, Ottawa, Toronto, Calgary, Alberta, and other cities to grieve for the victims and send a message of unity.

Trudeau, the Prime Minister, attended a candlelight vigil near the scene of the attack. He carried a bouquet of flowers and addressed the community.

“We stand with you,” he said Monday night. “We love you. We support you. We will always defend and protect your right to gather together to pray, today and every day.”

‘They were just praying’

At a vigil Monday night at the mosque, Mary Christine Miller, 31, struggled to understand why the attack happened.

“Why?” she said. “They didn’t do anything to us, they were just praying.”

Two young women stopped as many people as they could and asked mourners if they wanted pins that said, “Welcome to all refugees,” in French.

The Quebec Islamic Cultural Center thanked supporters for “hundreds of messages of compassion coming from all over.”

In Paris, the Eiffel Tower turned off its lights at midnight Tuesday in honor of the victims of the mosque shooting.