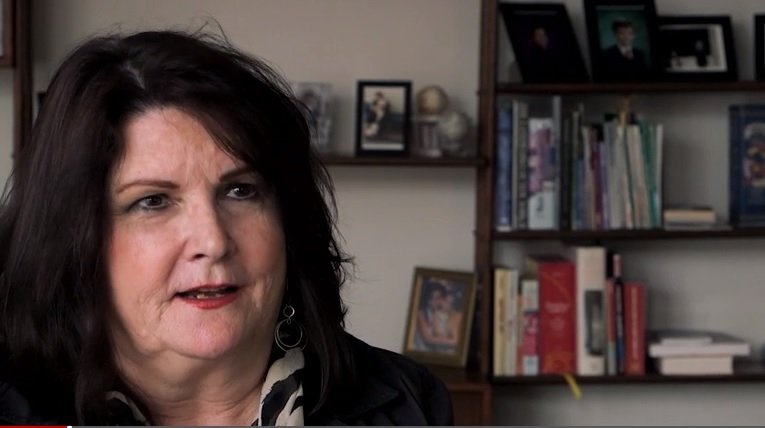 Bernadette McLaughlin’s world turned upside-down on April 16, 1990, when a visit to the doctor revealed a surprising breast cancer diagnosis.

“I was only 36 years old, and I was single,” she said. “I just couldn’t process anything he was saying.”

She worked full-time as a special-education teacher in New Jersey, but her most important job was raising her 8-year-old son, Michael.

McLaughlin dreaded the thought of telling people she had cancer.

“I remember I was laying on my stomach saying to myself, ‘You’re never going to have to tell anyone, because you’re going to die tonight,’ ” she said of the night she got the news.

For someone who was always in control of her life, the diagnosis felt like a fatal blow for McLaughlin. She went through the motions of treatment and had a lumpectomy in her left breast, followed by radiation.

“I hated radiation. It felt like I was in a ‘Star Wars’ movie. You’re in this machine, and then there’s a sound that makes you think you’re going to be disintegrated,” McLaughlin said.

To most people, McLaughlin’s life appeared normal. She continued working full-time and caring for Michael, who was in third grade, as if nothing had changed. The principal at her school set up a room with a cot so she could take naps during her off periods. She did it out of necessity but also because she didn’t want Michael to be affected by her diagnosis.

After a few months, McLaughlin was cancer-free. She returned to her normal routine, replacing weekly chemo and radiation treatments with a mammogram every six months.

But on the same date in April three years later, McLaughlin’s doctors found cancer cells in her left breast again. A mastectomy was her only option this time. She had immediate breast reconstruction and repeated the rigorous treatment schedule.

Again, she shielded Michael from as much as possible. He was in sixth grade, seemingly unaware; school-wide prayer calls were the extent of his exposure. “He’d come home from school and say, ‘Oh, Mommy! Sister Laura got on the PA system today and had the whole school say a prayer for you!’ ” McLaughlin recalled.

Unlike with her first diagnosis, McLaughlin knew what to expect. The countless biopsies that followed were the greatest challenge. Her doctors were extra cautious, taking tissue samples at the first sign of a lump or mass in her remaining right breast.

“I told my doctor, ‘My breast looks like a scenic railroad! Every which way, scars, scars, scars.’ And he said to me, ‘You can have 10 benign biopsies, but the 11th could be the cancer that kills you.’ ”

Seven years later, McLaughlin felt a lump in her right breast. The mammogram didn’t reveal any inconsistencies. Her new doctor suggested that she wait a couple of months, but she insisted on getting a biopsy.

She remembered lying on the operating table as her doctor read the results. “Usually, I’d be told it looks clean. This time, I saw his face, and he didn’t tell me anything. I knew at that moment I had cancer again.”

It was her third diagnosis in a 10-year period.

Michael was a senior in high school, old enough to understand her condition for the first time. “I was honest with him about having cancer, but I’d never say ‘I’m going to die.’ I’d just say ‘I saved my life,’ ” McLaughlin said.

Michael struggled with fear about his mother’s condition but was eager to help. He drove her to the hospital for her second mastectomy and breast reconstruction. Leaving little time to sulk, McLaughlin went back to work immediately and enrolled in graduate school to earn her master’s in education.

Cancer-free once again, McLaughlin’s life stabilized. Neither her body nor her behavior evidenced the decade-long struggle she endured. She loved her reconstructed breasts and felt in control again. Throughout all of her diagnoses, “I never cried. I never got emotional about it,” she said.

Questing for for confidence

Eight years after her last treatment, an unexpected staph infection forced doctors to remove her implants. “That’s when I cried,” she said. “They were so beautiful and life-like that I couldn’t believe it was happening to me.” Doctors removed the infected skin, expanded the remaining flesh on her chest, and inserted smaller implants.

But after six weeks, she was rushed to emergency surgery for a second staph infection and lost the option of reconstruction entirely. Flattened, misshapen lumps of fatty tissue and scars from 28 surgeries were all that remained.

McLaughlin struggled with her appearance after losing her breasts. She removed all the full-length mirrors from her home, preferring not to see herself in them, and pined over the lumps on her chest when she caught glimpses of her torso in the bathroom. “Every time I looked in the mirror, you think I’d be mad about the scars; I’d say, ‘Oh God, I hate that fat.’ I hate it, you know, and I was obsessed with it.”

McLaughlin didn’t find solace until years later when Michael, then in his 30s, gave her a tablet computer. With his help, McLaughlin opened a Twitter account. She became fast Twitter friends with Friday Jones, a celebrity tattoo artist and cast member on Oxygen’s “Tattoos After Dark.”

P.ink Day founder Noel Franus said “most breast cancer survivors are told they have two options after a mastectomy: reconstruction or no reconstruction. We believe they deserve a third option that most aren’t familiar with: tattoos.”

P.ink Day, now in its fifth year, has provided tattoos for more than 175 survivors in 25 cities. When a last-minute slot opened up at P.ink Day in New York, Jones recommended McLaughlin. “She tweeted me and said, ‘This one’s for you, Bern,’ ” McLaughlin said.

McLaughlin’s first tattoo was a breeze. Having lost almost all feeling in her chest due to nerve damage from radiation, she never felt the needle puncture her skin. Wispy black vines and flowers reminiscent of lace spread from her left shoulder down to the center of her chest.

“I became so obsessed with that tattoo, I forgot I had the lumps.” One year later, she was ready for another tattoo to cover her right side. This time, her son would join her.

She continued the vine across her chest, embellishing it with yellow roses, symbolic of life and rebirth to show that, “even in the coldest winters where everything is dead, out of the worst possible things that can happen to you, there’s still life. Life still goes on.”

Michael got a matching yellow rose on his forearm. “This tattoo will always remind me of not just her, not just this day, but of everything she’s done for me,” he said, recalling the years his mother silently endured breast cancer in order to preserve his childhood.

McLaughlin doesn’t miss her breasts anymore. “People could look at (my chest) and say it’s really ugly, and I looked at it that way too, until I got the tattoos.”

She will celebrate 17 years cancer-free in April but still considers herself a patient. Three hard-fought battles taught her to never get too comfortable.

To women fighting similar battles, McLaughlin shares this life lesson: “You live with cancer, but you don’t let cancer ruin your life.”