Hundreds gather in Williamsburg for ‘no ban’ rally 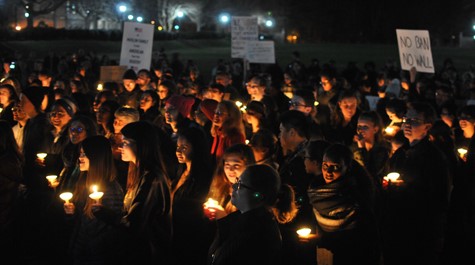 WILLIAMSBURG, Va. – Hundreds of people gathered Thursday night in the Sunken Garden to attend a ‘no ban’ rally.

A release on the William & Mary website said students, faculty, and others gathered to voice their opposition to President Trump’s recent executive order temporarily banning people from seven Muslim-majority countries from traveling to the U.S.

People carried signs and candles as a part of the “No Ban in My Name” rally which was sponsored by  Amnesty International, the Wesley Foundation, the Muslim Student Organization and the Hindu, Sikh and Jain Student Association.

Donations at the rally were collected for Amnesty International.

Trump on travel ban: ‘Call it what you want’