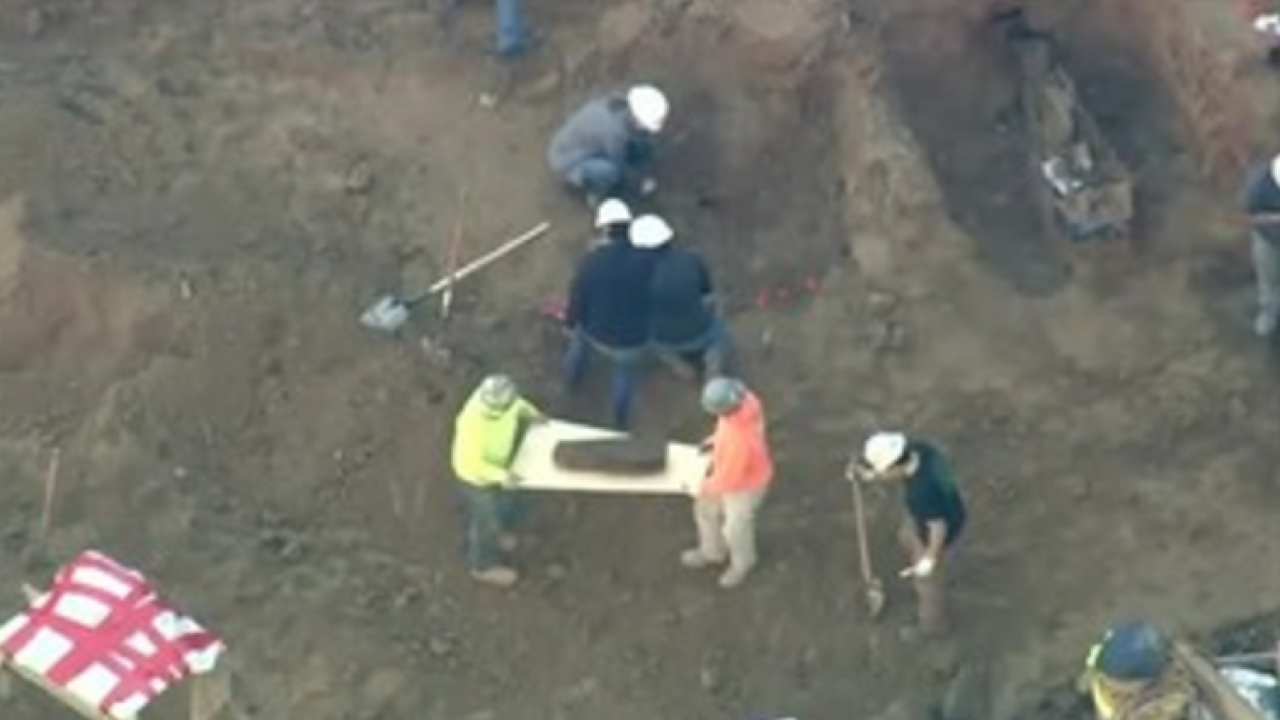 At first, they found just a few bones.

Then they dug up an entire coffin. And then another.

A construction crew working on a new building in Philadelphia on Thursday uncovered dozens of coffins buried 6 feet below a parking lot.

The site of a new apartment complex has been temporarily transformed into a quest to unearth the city’s past. Archaeologists are sorting through the remains, hoping to glean a better idea of what life was like in colonial Philadelphia.

Historians say the coffins were part of the First Baptist Church burial ground established in 1707 in the historic part of the city on what is now Arch Street. Records show that they should have been moved across town to the Mount Moriah Cemetery about 1860, but the job was never completed.

“It costs money to move the graves and sometimes it doesn’t happen,” Lee Arnold of the Historical Society of Pennsylvania told CNN. “Businesses decide to cut corners. The problem is that when you’re talking about the remains of loved ones, cutting corners is tragic.”

So far, researchers have found 38 coffins on the site, which is 40 feet by 25 feet wide. They said they have no idea how many are trapped beneath the dirt.

‘Everyone was a bit surprised’

Executive Vice President Jonathan Stavin of the PMC Property Group, the owner and contractor of the location, said that the company believes the number of remains found will grow.

“Everyone was a bit surprised. We were not expecting to find as much as we found. There are layers to this,” he said.

The company plans to build a 10-story, 116-unit apartment building on site. Stavin said officials are financially committed to helping with the eventual reinterment of the bodies at Mount Moriah.

Facing harsh, snowy weather, researchers are racing to find and remove the remains as efficiently as possible, and are hoping to finish excavation by Saturday.

However, Anna Dhody, the director and curator of the Mutter Institute and Museum, said the deadline may be extended.

“It’s not OK to leave any (remains) behind,” she said. “We’re not stopping until we’re done.”

Archaeologists are delving down into a layer of hard bedrock or clay that Dhody said has no telltale signs of disturbance.

“We’re fairly confident there’s nothing under that depositional layer,” she said.

To get the job done, experts in the field are employing the construction workers to do the bulk of the heavy dirt lifting. Trained researchers are then doing the more detailed excavation work.

“This is a positive thing for any possible future projects because we’re training them to look for future archeological sites,” said Dhody. “Philadelphia is a historical city. It’s not the first time something like this has happened and it won’t be the last. Construction workers are our first line of eyes. Getting them involved and interested is key to preserving our history.”

Beyond the four-layer deep cache of stacked coffins buried on PMC Property Group’s plot, Dhody told CNN that there may be other remains in the area.

“There’s parts of the cemetery that we can’t access because of another building,” she said. “There might be people buried there that we’ll not be able to access.”

Dhody said the Mutter Institute plans to delve into the coffins and study the bones, a process that will take many months.

“You can learn a lot from bones,” she said.

An analysis of the skeletons will reveal their ages, sex, race and physical traumas, as well as a myriad of other biological clues that will reveal their lifestyle habits. Kimberlee Moran, an associate teaching professor and director of the forensic center at Rutgers University, said the find is a huge educational opportunity.

She currently has about a dozen students working to exhume the coffins.

“Some coffins are really beautiful and quite intact,” Moran said. “Some are just an outline in the soil — they’re completely gone.”

Moran told CNN that she plans to create university classes in which students could continue to research the remains.

“It isn’t every day that you find a historic cemetery,” she said. “It’s a real window into the past and into the demographics of Philadelphia at that time.”