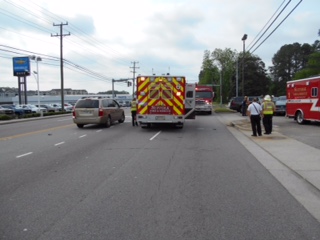 Police say a Kia minivan was traveling southbound on North Main Street and hit a Ford Mustang while leaving the 7-Eleven in that area.

The driver of the Mustang was pinned inside his vehicle for several minutes until Suffolk Fire & Rescue were able to pry the door open.

The driver of the Mustang was ticketed for failure to yield.