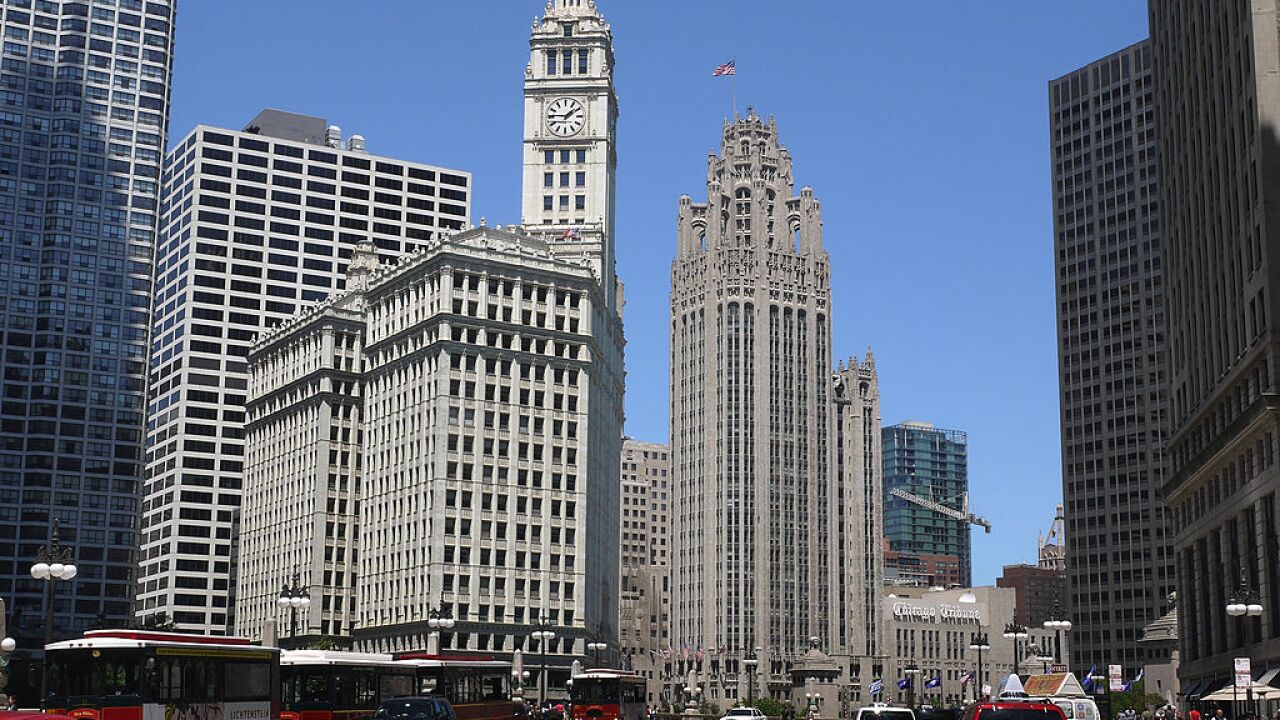 CHICAGO, IL – JUNE 07: Vehicles travel along Wacker Drive near the Tribune Tower (right center), headquarters of the Tribune Company, on June 7, 2012 in Chicago, Illinois. The Tribune Company, owner of the Chicago Tribune, Los Angeles Times and several broadcasting outlets across the country, returns to court today to face one of the final hurdles before possibly exiting bankruptcy. (Photo by Scott Olson/Getty Images)

Sinclair Broadcast Group, Inc. (Nasdaq: SBGI) (“Sinclair”) and Tribune Media Company (NYSE: TRCO) (“Tribune”) today announced that they have entered into a definitive agreement under which Sinclair will acquire 100% of the issued and outstanding shares of Tribune for $43.50 per share, for an aggregate purchase price of approximately $3.9 billion, plus the assumption of approximately $2.7 billion in net debt.

WTKR News 3 is owned by Tribune Media and will be included in the acquisition.

Tribune owns or operates 42 television stations in 33 markets, cable network WGN America, digital multicast network Antenna TV, minority stakes in the TV Food Network and CareerBuilder, and a variety of real estate assets. Tribune’s stations, a list of which is available in Tribune’s most recent Form 10-K filed on March 1, 2017, consist of 14 FOX, 12 CW, 6 CBS, 3 ABC, 2 NBC, 3 MyNetworkTV affiliates and 2 independent stations. The group includes stations in the top three DMAs in the country, seven in the top 10 and 34 in the top 50 DMAs.

“This is a transformational acquisition for Sinclair that will open up a myriad of opportunities for the company,” commented Chris Ripley, President and CEO of Sinclair. “The Tribune stations are highly complementary to Sinclair’s existing footprint and will create a leading nationwide media platform that includes our country’s largest markets. The acquisition will enable Sinclair to build ATSC 3.0 (Next Generation Broadcast Platform) advanced services, scale emerging networks and national sales, and integrate content verticals. The acquisition will also create substantial synergistic value through operating efficiencies, revenue streams, programming strategies and digital platforms.”

“This will be the largest acquisition in our company’s history, and I want to thank everyone from the Sinclair team, as well as our advisors and bankers who made this possible,” commented David Smith, Executive Chairman of Sinclair. “Television broadcasting is even more relevant today, especially when it comes to serving our local communities. Tribune’s stations allow Sinclair to strengthen our commitment to serving local communities and to advance the Next Generation Broadcast Platform. This acquisition will be a turning point for Sinclair, allowing us to better serve our viewers and advertisers while creating value for our shareholders.”

“Today’s announcement is the culmination of an extensive strategic review, which has delivered significant value to our stockholders,” said Peter Kern, Tribune’s Chief Executive Officer. “Since we announced the strategic review 15 months ago, we have streamlined the business, monetized non-core assets, strengthened our balance sheet and returned more than $800 million to stockholders — all of which has resulted in a 50% increase in stockholder value. We are extremely proud to join Sinclair, and we’re excited that Tribune stockholders and employees will have the opportunity to participate in the long-term growth of the combined company.”

The transaction has been unanimously approved by the Boards of Directors of both companies and is anticipated to close and fund in the fourth quarter of 2017. Completion of the transaction is subject to approval by Tribune’s stockholders, as well as customary closing conditions, including approval by the Federal Communications Commission (“FCC”), and antitrust clearance. Sinclair expects to fund the purchase price at closing through a combination of cash on hand, fully committed debt financing to be provided by JPMorgan Chase Bank, N.A., Royal Bank of Canada, Deutsche Bank AG New York Branch and Deutsche Bank Securities Inc. and by accessing the capital markets.

In order to comply with FCC ownership requirements and antitrust regulations, Sinclair may sell certain stations in markets where it currently owns stations. Such divestitures will be determined through the regulatory approval process.

Including the Tribune acquisition (before any related divestitures), all previously announced pending transactions, and pro forma for expected synergies, Sinclair’s 2015 and 2016 media revenues would have been $4.070 billion and $4.603 billion, respectively.

The $6.6 billion enterprise value represents an average pro forma EBITDA multiple of less than 7.0x on the core television and entertainment business and is expected to add over 40% pro forma 2016/2017 free cash flow per share accretion2.