NORFOLK, Va. - Norfolk Police and Virginia Police Departments are working together to find a man wanted in connection to nine armed robberies that have occurred at local convenience stores.

The robberies have all happened in the past two weeks.

In each case, the suspect, armed with a gun, walks into the store and demands money from the store clerks.

The robberies occurred at the following locations and times: 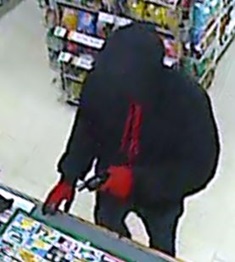 In the last incident on May 12, the suspect shot an employee at Super China. The victim was taken to Sentara Norfolk General Hospital and is expected to be okay.

Michael Armon works nearby and said he saw all the commotion last Friday.

"All the sudden all hell broke loose with the fire trucks and ambulances and everything else," said Amon, "That place is like family to us. They've been here as long as we have in the shopping center. I hate to see stuff like that happen."

The suspect is described as a white or Hispanic man in his late 20s to early 30s. He is approximately 5'10" tall and weighs 190-200 pounds. He wears a black mask is each of the robberies.

"They have got to catch him because we don't anybody to get hurt," said resident Larry Johnson.

If you recognize this man, or know anything about these robberies, you are encouraged to call the Norfolk Crime Line at 1-888-LOCK-U-UP.