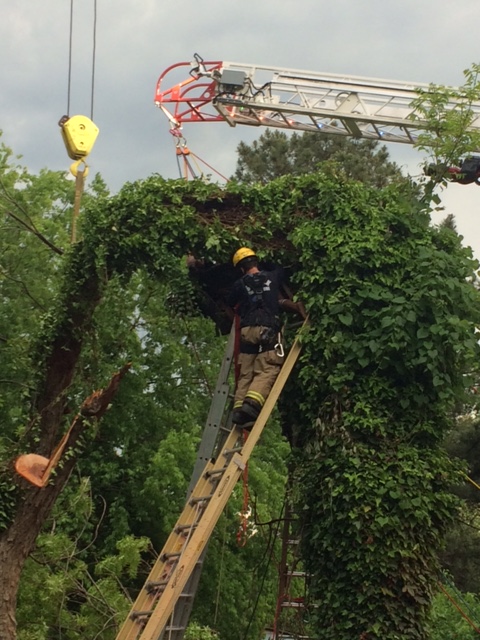 Police said the incident involved a man pinned in a tree about 24 feet off the ground.

Around 5 p.m. police communications got a call about a man that was stuck in a tree after neighbors heard him screaming for help.

The incident happened in the 200 block of North Street.

The adult male victim, believed to be in his late thirties, was on a ladder cutting the tree when a 20-foot-long section fell, pinning him from his torso, right arm and right leg at a fork in the tree.

The man was suspended almost upside down, according to police.

Thunderstorms and lightning moving through the area complicated rescue efforts.

The victim received emergency medical assessment and treatment while crews worked to remove the huge section of tree to keep him from being crushed under its weight.

Schadel Sheet Metal Works, Inc., of Suffolk, provided a crane to assist in raising the section of the tree so the victim could be rescued.

Suffolk Fire & Rescue’s Technical Rescue team was finally able to safely remove the victim from the tree at around 7 p.m.

The victim has life threatening injuries and was airlifted by Nightingale, which landed at a nearby park, to Sentara Norfolk General Hospital for treatment.