Images of what is purported to be the explosive device used in Monday night’s deadly bombing of a pop concert in Manchester have been published in US media as UK officials slammed US leaks on the investigation into the attack as “irritating.”

Britain’s National Police Chiefs’ Council warned Wednesday that leaks of potential evidence “undermine our investigations” and the UK Home Secretary Amber Rudd said she had made it clear that leaks “should not happen again.”

The New York Times Wednesday posted photos that show what it reported could be the detonator, a battery, nuts and screws for shrapnel, and fragments of a backpack used in the attack.

A Greater Manchester Police (GMP) spokeswoman did not comment to CNN on the photo publication. The Times, without specifying the source, said British authorities provided access to photos of materials found at the scene.

The incident, which came as concertgoers were preparing to leave an Ariana Grande concert in the city’s heart, took the lives of at least 22 people, including several children. Dozens were also wounded in the incident.

Identification of victims continues — as of Thursday morning local time 13 people who died in the blast have been named.

The UK will hold a minute of silence Thursday morning at 11 a.m. local time (6 a.m. ET) as the country continues to come to terms with the bombing at Manchester Arena, its worst terror attack since the 2005 London attacks.

The GMP also warned late Wednesday of fraudulent online fundraising for the families of the victims, and pointed Twitter users to a legitimate JustGiving page. 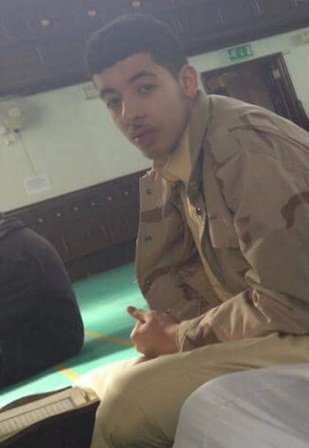 Two more men were arrested early Thursday morning, bringing the number in custody in connection to the bombing to eight. A woman arrested in a raid in Blackley, Manchester, was released late Wednesday without charge, police said.

Raids are taking place throughout the city in what police called a fast-moving investigation after British Prime Minister Theresa May raised the terror threat to its highest level — critical — for the first time in a decade.

Salman Abedi, a 22-year-old British-born national of Libyan descent, was named by police as the suicide bomber in Monday’s attack, and investigations are underway to uncover his associates.

“It is very clear that this is a network we are investigating,” Greater Manchester Police Chief Constable Ian Hopkins said.

Almost 1,000 soldiers have been deployed to guard key locations around the UK, including Buckingham Palace, to free up armed police to conduct extra patrols.

Up to 3,800 military personnel would be available to support police, Home Secretary Rudd said, amid warnings of another potential attack.

New details about Abedi emerged Wednesday, including that he had been known to intelligence services, Rudd told the BBC. Abedi was in Libya for three weeks and returned days before his attack, US military officials assigned to US Africa Command told CNN.

According to a family friend who asked not to be identified, the boys’ father had taken his sons to Libya in mid-April and confiscated their passports so they couldn’t return to the UK where they’d been in trouble with gangs.

Abedi got his passport back after telling his father he was going on a pilgrimage to Saudi Arabia, but returned to England instead.

Neighbor and family friend Akram Ben Ramadan, remembers Abedi as a quiet child and says he last saw him and his brother three months ago at evening prayers.

He says that Libyan youth in Manchester are particularly vulnerable to recruitment from Islamist extremists. They “feel like they are being disbanded from two societies, Libyan society and British society,” he said.

In Libya, Abedi’s brother — identified as 20-year-old Hashim Ramadan Abu Qassem al-Abedi — was arrested Tuesday night on suspicion of links to ISIS, said a statement from a Tripoli militia known as the Special Deterrence Force.

The militia, which is aligned with the Libyan government, said that the younger Abedi was allegedly planning a terror attack in Libya when arrested. He was picked up while allegedly receiving a money transfer from Salman Abedi. The statement also said he left the UK in mid-April and had been under surveillance about a month and a half.

CNN has not been able to independently verify the details from the militia, which also claimed the younger Abedi admitted knowledge about the Manchester attack and was in Britain for its planning.

At least 13 of the 22 victims who died in Monday’s attack have now been identified.

On Thursday, the family of 14-year-old Eilidh MacLeod released a statement that they had been informed of their daughter’s death.

“Our family is devastated and words cannot express how we feel at losing our darling Eilidh,” the statement, released via the GMP, said.

“Eilidh was vivacious and full of fun. She loved all music whether it was listening to Ariana or playing the bagpipes with her pipe band.”

“They were beautiful inside and out to ourselves and our families, and they were inseparable,” said a tribute from their families posted on Twitter.