British Prime Minister Theresa May claimed there was “too much tolerance” of Islamist extremism in the UK as she vowed a clampdown in the wake of the third terror attack to hit the UK this year.

Seven people died and 48 were injured when three masked men drove a van into pedestrians on London Bridge before leaping out and launching a stabbing spree in nearby bars and restaurants.

Speaking in Downing Street five days before the UK general election, May described the latest attack as “brutal” and said extremism had to be defeated. “We cannot and must not pretend that things can continue as they are,” she said. “Enough is enough.”

• Some of the surviving victims have life-threatening injuries.

• Major parties suspend general election campaign for a day but vote will go ahead on Thursday as planned.

While May insisted that the recent attacks in Westminster, Manchester and London Bridge were unconnected, she warned that they were bound together by the “single evil ideology of Islamist extremism.”

“It is an ideology that claims our Western values of freedom, democracy and human rights are incompatible with the religion of Islam,” she said.

“Defeating this ideology is one of the great challenges of our time, but it cannot be defeated by military intervention alone.

“Since the emergence of the threat from Islamist-inspired terrorism, our country has made significant progress in disrupting plots and protecting the public. But it is time to say `Enough is enough’.”

‘Bodies in the road’

The attack began late Saturday night, when a white van swerved into crowds of pedestrians on London Bridge, leaving bodies lying in the roadway, according to witness reports. At least one pedestrian is thought to have jumped into the Thames to escape being hit.

The suspects are then believed to have exited the van and proceeded on foot towards the nearby area of Borough Market, one of the capital’s most popular nightlife spots.

Eyewitnesses spoke of panic as three men armed with “foot-long” knives burst into packed restaurants and cafes, slashing at those inside indiscriminately. Many customers fought off the attackers, using chairs, pint glasses and bottles. Others hid behind tables and inside bathrooms or attempted to flee.

In total, the marauding attack lasted approximately eight minutes, according to police, who shot dead all three known suspects at the scene. At least one of the suspects appeared to be wearing a suicide bomb vest, though this was later confirmed by police to be a hoax.

The London Ambulance Service, who dispatched upwards of 80 medics to help deal with the incident, said at least 48 people were taken to five hospitals across the capital, with many more treated at the scene. French and Australian nationals have been confirmed by their respective governments as among those affected.

A police officer who was responding to the attack on London Bridge was also stabbed. The officer received serious but not life-threatening injuries, according to an official police statement.

The third terrorist attack to have occurred in the UK this year and the second in London, Saturday’s attack will renew the debate around the safety of the capital in light of the increased terror threat.

In a press conference Sunday morning, London Mayor Sadiq Khan praised the quick police response and asked Londoners to remain calm and vigilant. This is the second time Khan has addressed the public in response to a terror attack since becoming mayor, and he repeated his previous insistence that London remains one of the safest global cities in the world.

“We will not be cowered by terrorism and we will not let them win,” said Khan, who promised an increased police presence throughout the capital in the coming days.

For many in London, Saturday’s attack will be a grim reminder of the events on Westminster Bridge on March 22, when Khalid Masood drove a car into pedestrians, killing four and injuring 50, before stabbing a police officer to death at the entrance to parliament. The attacker — who reportedly had a criminal record and may have had connections to violent extremism — was gunned down by a police officer.

Khan is expected to join British Prime Minister Theresa May at an emergency meeting of Cobra — the UK’s emergency crisis committee — Sunday in response to the attack. May had earlier labeled the attack as “terrible incident.”

Aiming at the people

The attack began just after 10 p.m. local time on London Bridge, just north of an area famed for its cafes and bars, and near the London Bridge rail and underground interchange.

Witness Mark Roberts, who was on the bridge at the time of the attack, told CNN the van was traveling south across the River Thames at a speed and was swerving as it struck several people, knocking one person “about 20 feet into the air.”

The van swerved into oncoming lanes before hitting a bus stop and coming to a stop, Roberts said.

“Within my line of sight, there were five or six people on the ground that were not moving,” he said. “It looked to me that the van was aiming at the people.”

Roberts said he heard what sounded like gunshots about 10 minutes later. He estimated 100 people were on the bridge at the time, fewer than earlier in the night because it was getting late.

“I froze, to be honest,” Roberts said. “As I was thinking … which direction should I run, the van swerved across the other side of the bridge from me.”

Witnesses at the Elliot restaurant in Borough Market described seeing large groups of people running up the street — as it became apparent an attack was underway.

“Someone said, ‘What is going on?’ and one of the people running said, ‘There is a man with a knife up there and he is coming this way.’ There was complete panic as everyone ran to the back of the restaurant and crouched down trying to hide themselves from view,” one witness told CNN.

“A man suddenly appeared in the restaurant with a massive knife … (he) stabbed a waitress, who was hiding behind a partition, in the neck and stabbed a man in the back before running out of the restaurant,” the witness added.

Another witness said a masked man entered the nearby El Pastor restaurant and slashed a woman in the side with a knife.

Jack Applebee, who owns a restaurant one block away from Elliot’s restaurant, said he was standing outside when people came running down the street. A girl said, “They’re stabbing everyone.”

Applebee told his customers to go to the back of the restaurant. He said he started to pull down his shutters and turned around to see three men standing outside, one holding a machete.

The men just looked at the people in the restaurant said Applebee, who at that point was unsure what to do. After a brief pause, the men continued down the street, at which point Applebee and a colleague pulled down the shutters. Five minutes later they heard more gunshots outside.

About 90 minutes later, police evacuated the restaurant, he said.

Police activity spread throughout the Borough Market area. Officers rushed into the nearby Katzenjammers bar and ordered people to sit on the floor, patron Paul Connell told CNN.

“The police were absolutely brilliant, they came in and explained the situation,” said Connell. ” Armed police came in. They told us to remain on the floor but to stay calm. We were eventually led out of the bar and some kind people working in a hotel let us come in to use the bathroom and to give us water.”

During a press conference in the early hours of Sunday morning, the UK’s most senior counter terrorism officer, Metropolitan Police Assistant Commissioner for Specialist Operations, Mark Rowley, praised efforts by police in confronting the attack: “At 22:08 yesterday evening we began to receive reports that a vehicle had struck pedestrians on London Bridge. The vehicle continued to drive from London Bridge to Borough Market.”

“Armed officers responded very quickly and bravely, confronting three male suspects who were shot and killed in Borough Market. The suspects had been confronted and shot by the police within eight minutes of the first call.”

England has been on edge since May 22, when a suicide bomber killed 22 people at an Ariana Grande concert at the Manchester Arena.

Organizers have confirmed that a benefit concert for victims of that attack, scheduled for Sunday in Manchester, will go ahead as planned. On Saturday, the singer tweeted, “Praying for London.” 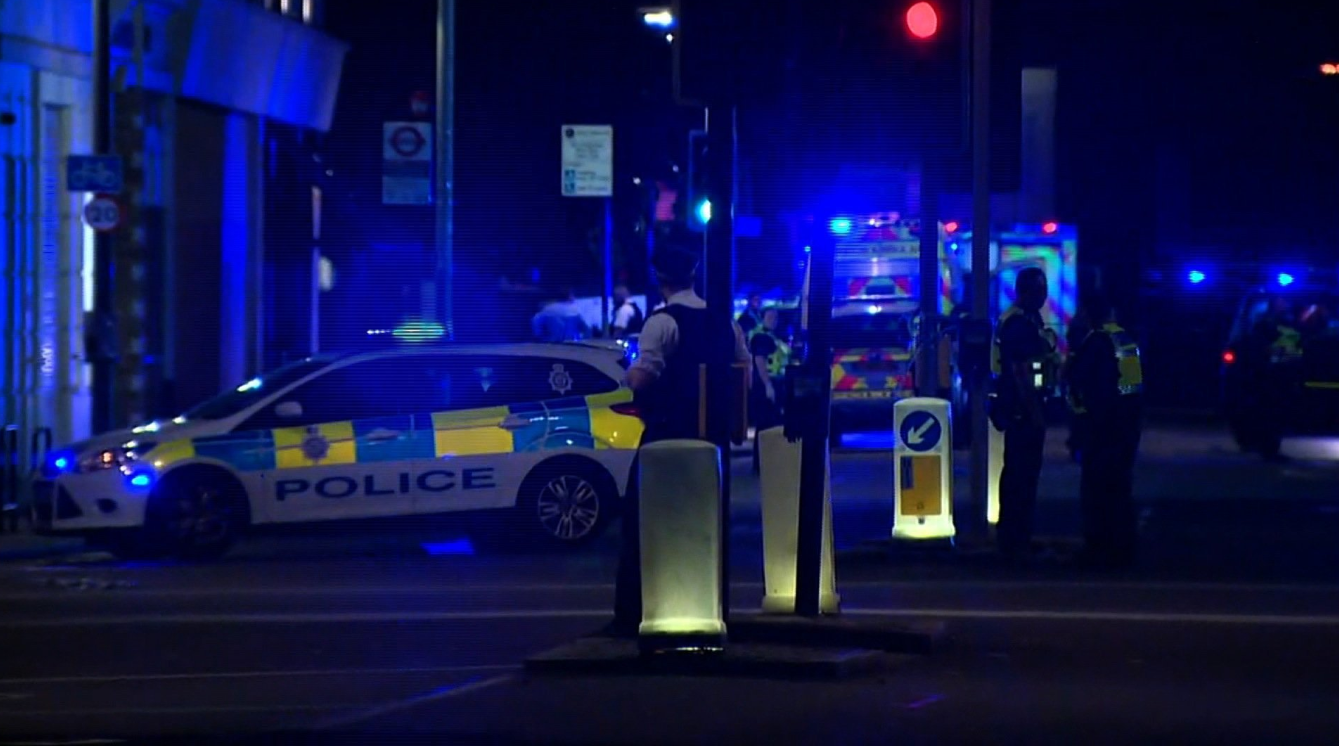