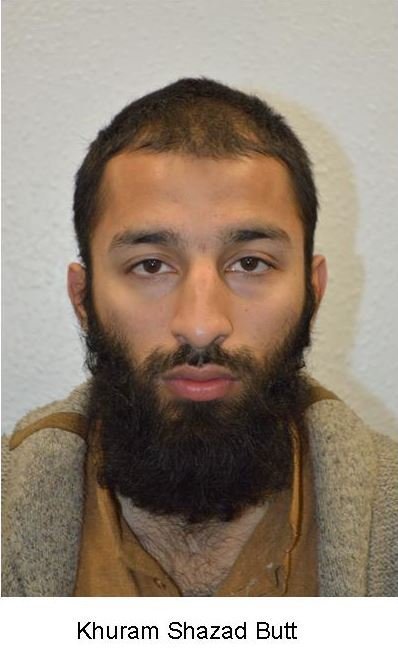 British police have identified two of the three men behind Saturday night’s terror attack in London as Khuram Shazad Butt and Rachid Redouane.

Butt, 27, was a British citizen who was born in Pakistan, London’s Metropolitan Police said. Police and MI5 — the UK’s counterintelligence and security agency — were familiar with him, but there was no intelligence to suggest the weekend attack was being planned, police said.

Redouane, 30, who also used the name Rachid Elkhdar, had claimed to be Moroccan and Libyan.

The third attacker has been identified, police said, but his name has not been publicly released.

The assailants killed seven people and wounded 48 others by ramming a vehicle into a crowd on London Bridge and then stabbing people in nearby Borough Market.

Police shot and killed all three of the attackers, who were wearing suicide belts that turned out to be fakes.

Twelve people were arrested following the attack. Metropolitan Police said Monday that all the people arrested Sunday in connection with the London Bridge terror attack have been released without charges.

One attacker had a connection to Ireland, a source briefed by an Irish counterterrorism official said. May faced questions over cutting 20,000 police posts in her time as Home Secretary. Britain’s most senior police officer Cressida Dick said police resourcing needed to be revised. Leader of the main opposition Labour Party, Jeremy Corbyn, called on for the prime minister to resign over cuts.

British Prime Minister Theresa May faced a barrage of questions Monday on deep cuts made to police numbers in the UK while she was Home Secretary.

Authorities also faced scrutiny over what they knew about the alleged perpetrators of the attack.

The carnage is the third such terror attack on British soil in three months and the second in London involving the use of vehicles as weapons.

In March, 52-year-old British national Khalid Masood rammed a vehicle into a crowd on Westminster Bridge and stabbed a police officer, in an attack that left five people dead.

Police said there would be “increased physical measures on London’s bridges to keep the public safe.” On Monday, concrete barricades had been erected to separate pedestrians from vehicles on some of the city’s major bridges.

May under fire over police cuts

Security had already become a battleground issue ahead of Thursday’s general election following the Manchester bombing last month, in which 22 people were killed as they left an Ariana Grande concert.

Pressure on May intensified Monday when she faced a volley of questions over police cuts from journalists at a campaign event. May insisted that her record was sound, saying that she had introduced a raft of anti-terror legislation as Home Secretary. She also said that funding for counter-terrorism efforts had been protected.

But May defended her government’s stance on the issue, saying that her Conservative government had protected police budgets.

“The commissioner of the Metropolitan police has said the Met is well resourced, and they are, and that they have very powerful counter-terrorism capabilities, and they do. We have protected counterterrorism policing budgets, we have also provided funding for the increase of the number of armed police officers,” she said at a campaign event.

Jeremy Corbyn, leader of the main opposition party, called on May to resign over the issue, saying earlier that “you cannot protect the public on the cheap,” and promising to recruit another 10,000 police officers if he is elected into power.

One of the victims in Saturday’s attack was identified as Chrissy Archibald, a Canadian who had moved to Europe to be with her fiance.

Another 36 men and women are currently in hospital, 18 of whom are in a critical condition, according to NHS England.

A memorial is planned for 6 p.m. (1 p.m. ET) local time Monday in the capital’s Potters Field Park, as the city continues to digest its second attack in two months.

London Mayor Sadiq Khan said Monday that the actions of the attackers were perverse and poisonous, adding that they had no place in Islam.

“The acts of these three men on Saturday night was cowardly, was evil and I’m angry and furious that these three men are using to justify their actions the faith that I belong to,” he said.

ISIS claimed responsibility for the attack on Sunday night, although they provided no evidence for their involvement or details of the attack.

Police said they had seized a huge amount of forensic material in two early morning raids in east London Monday, as part of their efforts to determine if the three men who carried out Saturday’s attack were part of a wider network.

Details of the investigation had been kept closely under wraps, in stark contrast to last month’s Manchester bombing, when photos and information from the investigation were repeatedly leaked to the US media, triggering a row between the British and American governments.

Monday’s early morning raids follow raids on a housing complex in Barking east London on Sunday, where a series of arrests were made.

CNN’s Melissa Bell spoke to residents there who recognized a familiar face among the three dead attackers, identifying him as one of their neighbors and describing him as a family man who kept to himself.

Barking resident Erica Gasperri said she went to the police after she saw a man, believed to be the attacker, teaching the local children about Islam.

“All of a sudden we saw this individual speaking to the kids … showing them how to pray,” she said. “I could see them from my window.”