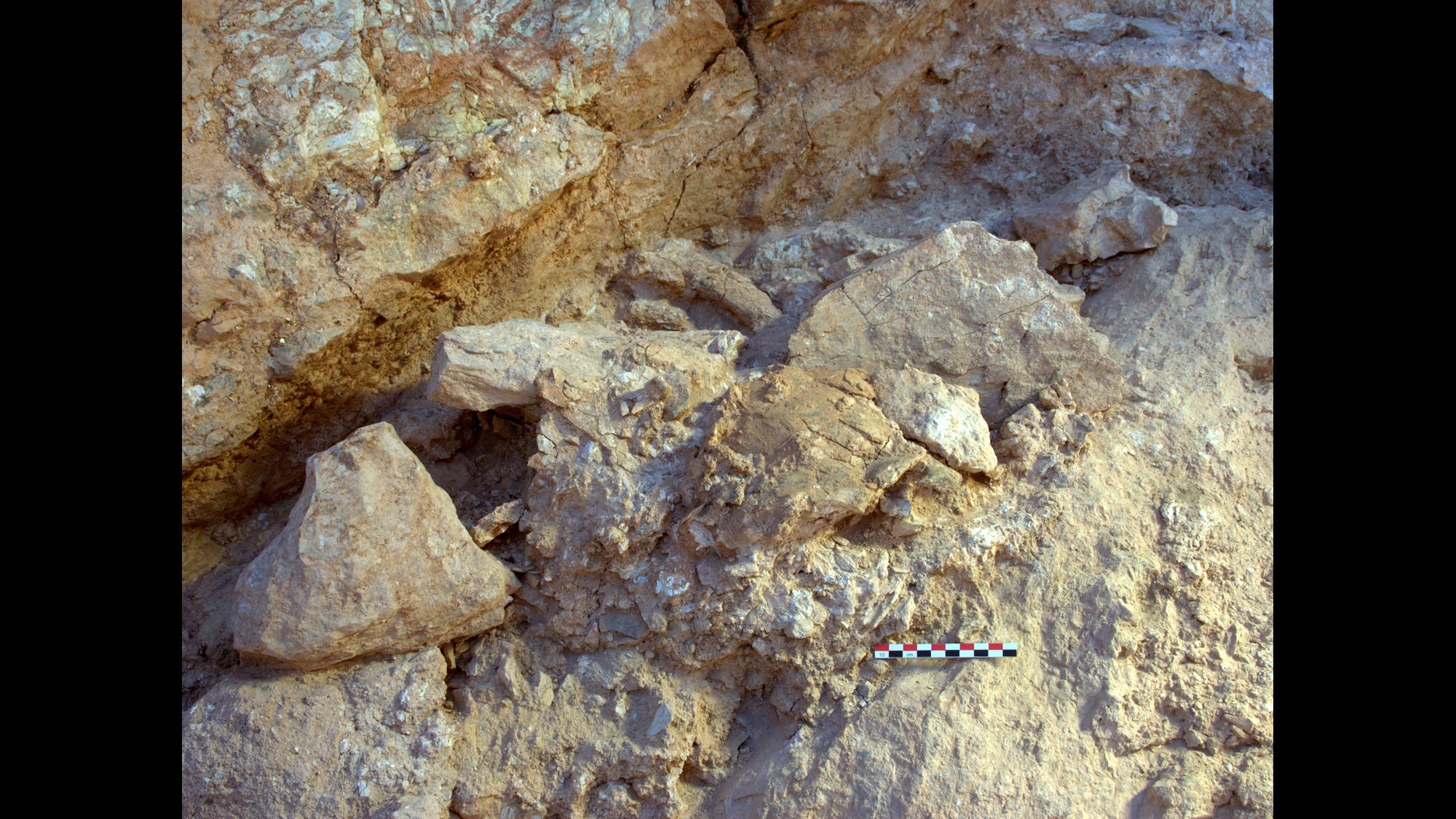 The oldest fossil remains of Homo sapiens, dating back to 300,000 years, have been found at a site in Jebel Irhoud, Morocco. This is 100,000 years older than previously discovered fossils of Homo sapiens that have been securely dated. The discovery was presented in a study in the journal Nature on Wednesday.

This marks the first discovery of such fossils in north Africa, and widens the “cradle of mankind” to encompass all of Africa, the researchers said. Previous finds were in south or east Africa. The fossils, including a partial skull and a lower jaw, belong to five different individuals including three young adults, an adolescent and a child estimated to be 8 years old. Stone tools, animal bones and evidence of fire were also found within the same layer at the site.

But what the researchers found to be most remarkable about these fossils is that they capture a moment in time of evolution. The facial features of the skull look like a modern human, but the brain case is very elongated and archaically characteristic of early humans.

There has been increasing evidence that the modern human lineage diverged from Neanderthals and Denisovans 500,000 years ago, making us close relatives rather than direct descendants. Before this discovery, it was believed that the early modern humans we evolved from were in Africa 200,000 years ago and looked very similar to modern humans. But what happened in between that time?

This is still unknown, although the researchers suggest the possibility that there were multiple groups of hominins, or human ancestors, overlapping and having complex relationships.

Because they didn’t previously have fossil evidence of Homo sapiens from 300,000 years ago, this helps to fill a small part of that gap in the fossil record. The fossils provide insight about this evolutionary time for Homo sapiens before the early modern stage 200,000 years ago.

“Our analysis convinced us that this material represents the very root of our species, the oldest Homo sapiens ever found in Africa or elsewhere,” said Jean-Jacques Hublin, lead study author, paleoanthropologist and professor at Max Planck Institute for Evolutionary Anthropology.

“We confirmed that they display this surprising combination of very advanced features and more archaic conditions. It allowed us to envision a more complex picture for the emergence of our species with different parts of the anatomy evolving at different rates, some features being fixed very early in a modern way and others taking a longer time to reach the modern condition.”

If we could see these Homo sapiens from 300,000 years ago walking around today, they would look very similar to us — if they were wearing a hat, Hublin said. Their faces would be short, flat and retracted compared to Neanderthals, and even some of the dental aspects are similar to ours.

But that elongated skull would give them away as being not quite like us. Their brains, and specifically the cerebellum, wasn’t shaped like ours. But based on the brain case they discovered, these Homo sapiens did have a larger cerebellum than Neanderthals.

“The story of our species in the last 300,000 years is mostly the evolution of our brain and in this time period, a number of mutations occurred affecting brain connectivity,” Hublin said.

How the fossils were discovered

East Africa has been considered the “cradle of life” for the origins and evolution of humans, but north Africa has been largely ignored in this aspect. A skull was found in Florisbad, South Africa, in the 1930s and originally dated to 260,000 years ago, but it’s fragmentary and the exact date is subject to debate, the researchers said.

During the 1960s, mining began on top of a large hill of limestone in Morocco and when the miners hit a pocket of sediment, it partially collapsed to reveal a human skull, bones and stone artifacts. Initial research revealed the artifacts to be 40,000 years old, although that didn’t align with the features of the bones.

In 2004, efforts were made to clean up the site and excavate it in order to figure out its true age. It’s been an active site ever since, and there is still more to be discovered, the researchers said.

Hublin and Abdelouahed Ben-Ncer of the National Institute for Archaeology and Heritage in Rabat, Morocco, found human and animal bones, stone flints and evidence of fire in a preserved layer of the site.

While this isn’t the oldest evidence of fire, not many sites can document this back to 300,000 years ago. And these fires were controlled, being created and used easily. The fire evidence on the animal bones and burnt flints were key.

Through a dating technique called thermoluminescence, which measures how long it’s been since a material with crystalline minerals was heated or exposed to sunlight, they determined that the site was anywhere between 300,000 to 350,000 years old. This included other previous discoveries at the site.

“This was a ‘big wow,'” Hublin said. “We realized this site was much older than anyone could imagine.”

This discovery, combined with a Homo sapien skull found in South Africa, challenges the theory that Homo sapiens were confined to east Africa.

“I’m not claiming Morocco became the cradle of modern humankind,” Hublin said. “Rather, we would support the notion that around 300,000 years ago, very early forms of Homo sapiens were already dispersed all over Africa. This is facilitated by the fact that between 330,000 to 300,000 years before present, Africa did not look like it does today and there was no Sahara Desert. There was a lot of connections between other parts of the continent.”

The Sahara was effectively “green” at the time, with open grasslands, groupings of trees, rivers and huge lakes and more wet and humid than it is today. This supported animal life like gazelles, zebras, wildebeests, lions and other big cats — all of which were discovered at the site through fossil evidence of animals that these Homo sapiens hunted.

The tools and fire evidence also point to this being a site linked with the Middle Stone Age. A period spanning a million and half years before this involved the use of large, heavy stone tools like hand axes and cleavers.

“What distinguished the Middle Stone Age is a shift from large, heavy-duty stone tools to an emphasis on producing stone flakes that were smaller and lighter,” said Shannon McPherron, archaeologist at Max Planck and one of the study authors. “They would transform these flakes into pointed forms that most archeologists think were part of weaponry, increased sufficiency in hunting at a distance, which was more effective and safer for the hunter.”

During the time these Homo sapiens lived, the site at the collapsed hill was actually a cave that provided shelter. Their findings paint a picture of a hunting encampment where people passing through the landscape would spend the night, take shelter and clean and consume the animals they hunted, McPherron said.

There are also no nearby sources for flint, meaning that the Homo sapiens found their high quality raw materials elsewhere. McPherron believes that the flakes indicate that the hunters were sharpening and transforming the flints while they were in the cave.

Sequencing of the Neanderthal and Denisovan genomes happened at the Max Planck Institute of Evolutionary Anthropology, but that won’t happen with these fossils. Although they tried to extract DNA from them, it wasn’t there, Hublin said. Ancient DNA has yet to be recovered from Africa because the fossils are too old and the conditions are too hot.

The researchers hope to return to Jebel Irhoud because there is still more to be excavated.

But this discovery creates more questions about how, when and where we evolved.

Evolution was not a sudden shift, but a gradual accretion of features and a series of mutations affecting development, the researchers said. And due to environmental changes, it was happening sometimes in isolated populations; other times, exchanges of genes and innovation occurred when populations came together, causing favorable mutations to spread through populations due to positive selection, Hublin believes.

This is the oldest known fossil to date — for now, Hublin said. And the center of origin for us as a species is still unknown. But this discovery widens the “cradle of life” from East Africa to the whole continent, Hublin said, and suggests that these evolutionary changes were happening across the continent at the same time.

“Our results challenge the preconceived notion of early modern humans in East Africa in many ways regarding the date of emergence of our species, the geographical conditions of this emergence and the conditions of the evolution of the early forms of Homo sapiens,” Hublin said.