VIRGINIA BEACH, Va. - Virginia Beach Police are investigating a homicide in an apartment.

Police say an adult female was found dead in an apartment in the 700 block of Gourmet Way around 10:07 a.m. Monday morning. She has been identified as 36-year-old Keisa Overby Staton.

Police are searching for 42-year-old Zorobabel Matthan Griggs. He is wanted for Murder and Use of a Firearm.

Griggs is described as 5'8" tall and weighing approximately 200 pounds. He has a grey goatee / mustache, his head is shaved and he has a tattoo of "Kayos" both on his chest and arm. He also has a scar on his cheek.

Griggs is considered dangerous as he is known to be violent, police said.

Police say the victim and suspect were known to each other. 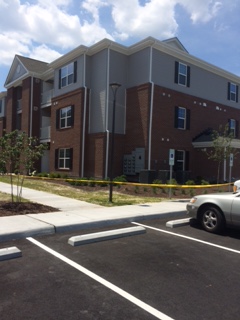