Officers dressed in riot gear intervened as protesters tried to enter the red zone — a blocked-off area close to the summit venue — while other small groups staged sit-ins across the city.

Police said 160 officers have been injured since Thursday and reinforcements from outside Hamburg have been requested. At least 70 people were arrested and 15 have been taken into detention since the protests began, police said on Twitter.

At one of the sit-ins, a little over a mile from the summit security zone, water cannons were deployed against protesters who had come armed with umbrellas and rain gear. Earlier, protest organizers told CNN they would try to storm police barricades around restricted areas.

Members of the “Color the Red Zone” protest said they were trying to make it difficult for G20 participants to travel to the talks.

“We are living in a democracy, and the red zone is not a democracy,” said Karl S, a student protester from Dusseldorf who declined to give CNN his full name.

“I’m sure we can’t stop all these leaders from meeting, but if we can stop them from getting their food or catering shortly, we’ve achieved something.”

Christian, a protest organizer who also declined to give his surname, said the “point is to disturb the G20,” adding: “It’s not right that a few countries get to decide what happens to the rest of the world at this summit.”

Video from nearby showed police dressed in riot gear aggressively pushing protesters and journalists away from the scene.

“This is what democracy looks like,” protesters shouted amid the chaos.

Some small groups of people were pushed back as they tried to march down streets to be used by G20 delegates. They said their objective was not to get close to the summit but to block the delegates’ routes to it.

Volunteers could be seen treating people with saline solution, possibly due to tear gas or pepper spray, and tending to other wounded. One woman could be seen bleeding from her neck or head. Police told demonstrators they were in a forbidden area.

Protesters appeared to disrupt some G20 visitors’ movements around the city.

Melania Trump’s spokeswoman told reporters the first lady was unable to take part in scheduled events with other G20 spouses due to the protests. “Hamburg police couldn’t provide clearance for us to leave,” Stephanie Grisham said.

The spouses were due to take a river cruise and tour a climate change center, according to media reports.

Hamburg police tweeted Friday afternoon that some officers had been attacked with iron bars in the Reeperbahn, the city’s famous entertainment district.

Other officers were attacked with fire bombs in Holstenstrasse, farther north, police said, and barricades were set afire.

A big crowd, including leftist groups from elsewhere in Europe, gathered Friday afternoon amid a more festive atmosphere in Millerntorplatz, a square off the Reeperbahn. Many held banners or flags aloft as they listened to music.

But fresh confrontations soon broke out nearby as protesters throwing stones and water bottles clashed with police near the waterfront.

Violence also flared earlier in the Altona district, a couple of miles to the west of the summit security zone.

Hamburg police said one of their helicopters was targeted with a flare that only narrowly missed it. Two police vehicles carrying officers were also attacked, with paint thrown and windows smashed. Bottles and fireworks were flung, injuring some officers, police said.

The tires of a Canadian delegation car were slashed, police said, although a Canadian official disputed that account.

Police earlier asked the public to avoid the area near the Hamburg-Altona railway station, where authorities said people had set vehicles on fire and thrown Molotov cocktails. Smoke could be seen across the skyline from fires said to have been lit by protesters.

The latest round of demonstrations, though unruly, are smaller and more dispersed than Thursday night’s violence, during which at least 111 police officers were hurt, according to police. Water cannons were deployed to disperse protesters, and 29 arrests were made. Police did not give the reasons for the arrests.

Security is tight in the city of 1.8 million as leaders from around the world convene for the G20 summit.

The Group of 20, which includes 19 countries and the European Union, accounts for about 80% of the global gross domestic product. Around two-thirds of the world’s population live in a G20 country.

Leaders are expected to discuss climate change, terrorism and migration during the two-day meeting in what is the birthplace of German Chancellor Angela Merkel. 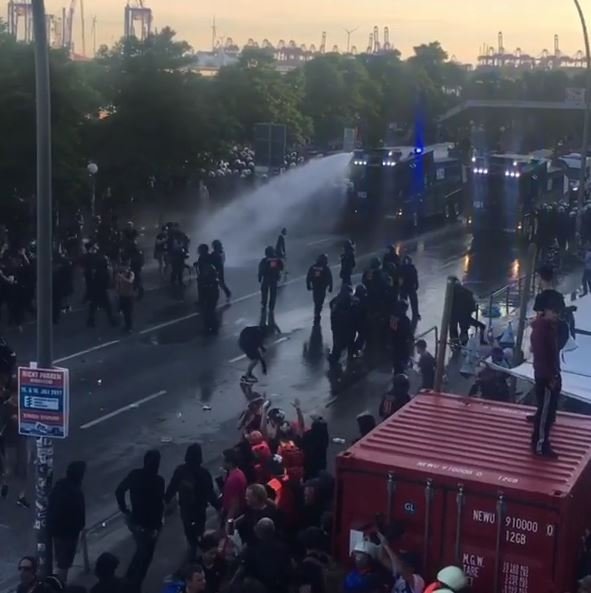