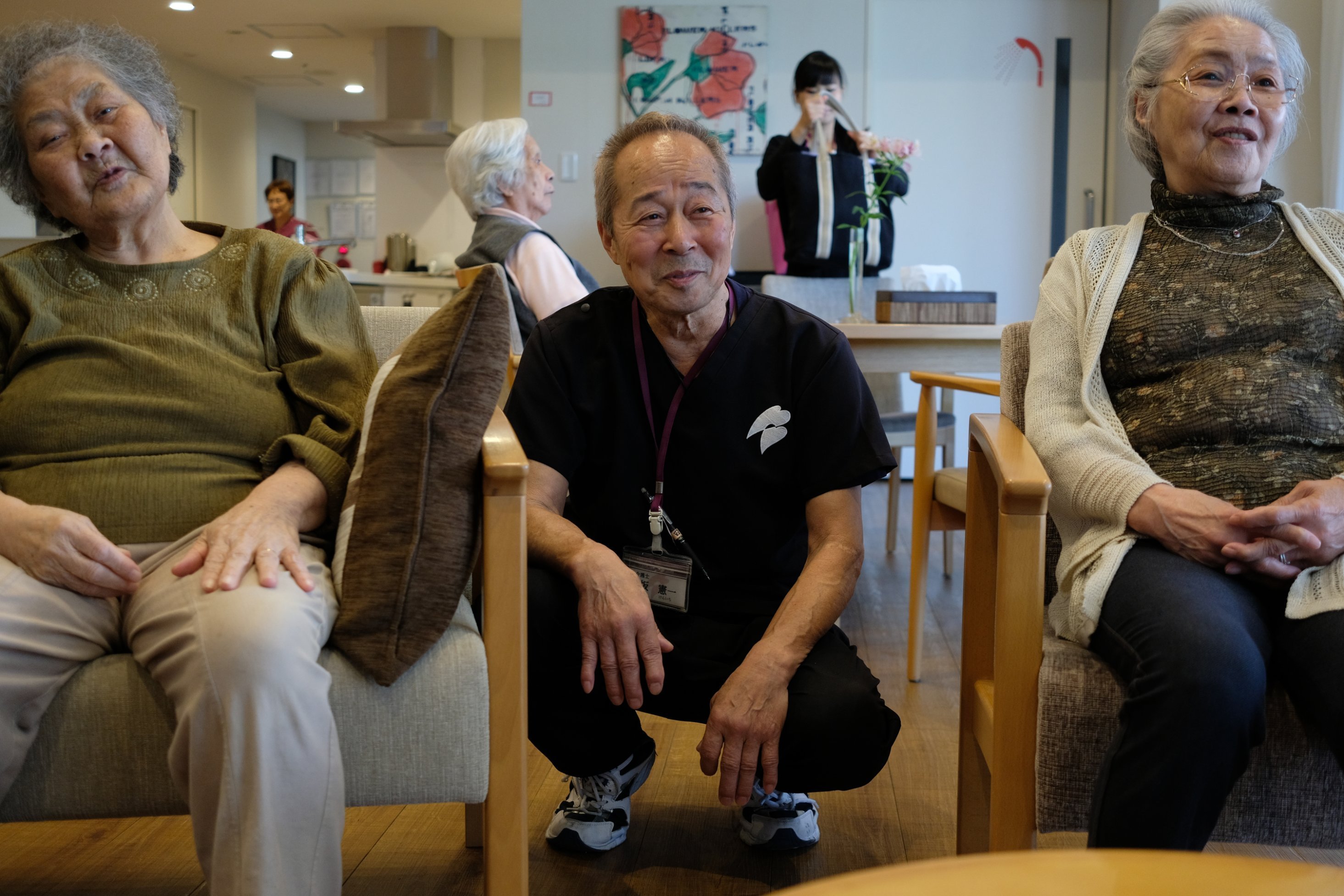 At 70, he could be mistaken for a resident, but Tasaka isn’t thinking of retiring anytime soon. Instead, the former tofu-maker is forging a second career as a caregiver to the elderly in Tokyo’s Cross Hearts nursing home.

“I always had an interest in care-giving and pensioners don’t receive much in Japan so I’m really thankful that this opportunity existed here for me,” Tasaka told CNN.

“I’m old too so I can understand what these seniors are going through. I actually feel like I’m hanging out with the residents here as opposed to caring for them”

Catering to a ‘super-aged’ nation

With its fast-declining birthrate and growing cohort of old people, Japan is considered a “super-aged” nation, where more than 20% of the population is over 65. By 2020, there will be 13 such countries in the world.

To cope with a growing labor shortage that’s set to hit the care-giving and industrial sectors the hardest, and in the hopes of reinvigorating a stalling economy, the Japanese government has encouraged more seniors and stay-at-home mothers to re-enter the workforce.

In many ways, Tasaka is a trailblazer for this incentive. For the past five years, he’s ferried daycare residents to and from their homes, and helped feed and provided companionship to others.

He lives in one of the facility’s neighboring apartment complexes and is just one of a couple of dozen employees over 65, who work alongside both younger Japanese and foreign staff. In many countries, these jobs would be filled by foreign workers but Japan lacks a concrete immigration policy has resulted in older citizens staying in employment for longer.

The facility — which has a waiting list of several hundred — sets their official retirement age at 70, but lets people who want to work do so until 80. The common retirement age in Japan is between 60 and 65, but doctors recently proposed raising it to 75.

Despite efforts to encourage more senior citizens to work for longer, 80.5% of companies in Japan still set their official retirement age at 60, according to a 2015 survey conducted by the Japanese Ministry of Health, Labor and Welfare.

In 2013, the government passed a law requiring companies to raise the mandatory retirement age to 65. But full compliance isn’t required until 2025.

This has created a situation where many companies rehire senior workers at lower salaries once they pass retirement age, according to Atsushi Seike, an economist at Keio University in Japan.

“There should be more pressure on companies to extend mandatory retirement to 65 as a decline in wages really discourages older workers to continue working,” he said.

Cross Hearts executive director Seiko Adachi told CNN that many of her more senior charges are motivated through their interaction with younger workers and older residents.

“Growing old is the first step in losing something, whether that be your sibling, your parent, or your role in society … the good thing about elderly carers, is that they really understand how our elderly residents are feeling,” she said.

“It’s also good preventative care for them as if they feel like they have a place to go, that will keep them going.”

According to Adachi, the key to engaging more senior employees is by helping them focus on their care-giving job, not as a part-time wage-filler, but as a second career that they can really develop.

For some, the possibilities appear endless.

“I want to study for another care-giving license and take on a managerial role later on,” Tasaka said with a grin. “I don’t feel limited by my age.”