NEWPORT NEWS, Va. - Newport News Police are investigating the robbery of a taxi cab driver that occurred in the early morning hours of August 2.

Newport News Police say they responded to the 400 block of Oyster Point Road around 2:45 a.m. that morning and met with the victim, a 44-year-old taxi cab driver for a local company.

The driver told police he had picked up a man on Menchville Road who requested a ride to another location in Newport News.

During the ride, the man grabbed the driver by the collar of his shirt and placed an unknown hard object into his neck/shoulder area while demanding money.

"I'm thinking I'm going to give him whatever," said the driver, who asked News 3 to hide his identity. "He can have everything. That's the most important thing. All you want to do is survive."

The driver complied and handed over an undisclosed amount of money to the man. After taking the money, the man ordered the driver to take him to Warwick Boulevard, where he jumped out of the taxi and ran.

"To have the relief of the fact that he's gone and you're alive - it's a great feeling," the driver said.

The driver then drove to a nearby store to call police. "What I want other cabdrivers to know about my experience is to be as safe as possible, especially at night because you can never tell," the driver said.

The man is described as a black male in his late 20s to early 30s. He was approximately 6' tall about 200 pounds. He was wearing a dark green shirt, black pants, and a baseball cap. He had a small afro.

If anyone has any information that may help police, you're asked to call the Crime Line at 1-888-LOCK-U-UP. 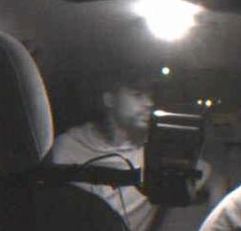