President Donald Trump is trying to turn the page on a disastrous week in which his comments responding to white supremacists’ actions in Charlottesville, Virginia, were condemned across the political spectrum by all but his adoring base.

So he is out west Tuesday to revel in the cheers of thousands of those core supporters.

Less than 24 hours after delivering a primetime speech outlining his Afghanistan strategy, Trump will hold a campaign rally in Phoenix. The President will be joined on stage by Vice President Mike Pence and Housing and Urban Development Secretary Ben Carson.

In anticipation of Trump’s trip, the political world was buzzing about not just whether the President would set off controversy in Phoenix — but which specific hot-button clash he could wade into.

Could he endorse Kelli Ward or another Republican challenger to Arizona Sen. Jeff Flake, who recently wrote a book decrying Trump’s corrupting influence on the party?

Might Trump lead chants of “build the wall,” returning to the animating promise of his 2016 campaign at a time members of Congress are facing an end-of-September deadline to fund the government while knowing that including any money for a border wall could cost them votes?

Or will Tuesday night bring a combination of those — or something else entirely?

At least one question — whether Trump would pardon Joe Arpaio, the controversial former Arizona sheriff who was convicted of contempt by a federal judge last month — appeared to be answered before Trump touched down in the Grand Canyon state.

White House press secretary Sarah Huckabee Sanders asked on Air Force One said no news would be made Tuesday on a would-be Arpaio pardon.

“I can tell you that there will be no discussion of that today at any point and no action will be taken on that front at any time today,” Sanders said.

Trump’s arrival at the Phoenix Convention Center will be greeted by mass protests from progressive and anti-bigotry groups.

Democrats in Arizona, including Phoenix Mayor Greg Stanton, are lambasting Trump for even visiting the state — particularly for a campaign rally.

Trump’s unpredictable and bombastic style “makes us worry that he will come here and make things worse, not better,” said Rep. Ruben Gallego, an Arizona Democrat.

Jevin Hodge, the vice chairman of the Arizona Democratic Party, said Trump’s “racially inflamed rhetoric is not welcome here in Arizona and is not what this country needs at this time.”

Trump’s day in Arizona started near the border, where he viewed equipment used by US Customs and Border Patrol agents to track illegal crossings.

Trump’s aides planned for him to visit the US-Mexico border as part of his visit Tuesday to Yuma, but were forced to scrap the visit because of security concerns, according to a person familiar with the situation.

According to background provided by the White House on Monday evening, Trump was slated to visit the San Luis II commercial crossing, about 20 miles south of Yuma.

But when he stopped in Yuma on Tuesday, he did not leave the grounds of the Marine base where he landed. The person did not specify the nature of the threat.

Asked for comment, the White House referred to the Secret Service.

The administration has praised the Yuma border patrol sector for the miles of secure fencing, constructed over the past decade, which they say has curtailed the flow of undocumented immigrants crossing the border illegally.

Those commitments were made during previous administrations, however, and previous presidents have claimed credit. George W. Bush toured the border near Yuma during his second term, riding a dune buggy along the fencing and heralding funds he approved to build it.

The immigration issue has been a touchstone of Trump’s throughout his campaign and the early days of his administration, centered on his promise to construct a wall along the US-Mexico border.

The project has seen setbacks, including an acknowledgment that Mexico will not — at least for now — pay for the wall’s construction, as Trump has repeatedly promised. Instead, Congress has approved some funding for the measure, which Trump insists will be repaid.

On Tuesday, administration officials sought to underscore Trump’s tough-on-immigration stance, attributing a drop in border apprehensions to his actions and rhetoric over the first six months of his tenure.

Allies and enemies in the area

While Trump allies are likely to be on hand at the Phoenix rally, some of Arizona’s top Republicans — including Flake and Sen. John McCain, who is undergoing cancer treatment — will not be there Tuesday night.

Arizona Gov. Doug Ducey, a Republican who is up for re-election in 2018, will greet Trump on the tarmac when he lands Tuesday afternoon but will not attend the rally, his office said.

“Gov. Ducey’s focus has been working with law enforcement toward a safe event in downtown Phoenix for all those involved and in the area. That will continue to be his priority during the event and afterwards,” Ducey spokesman Daniel Scarpinato told The Arizona Republic.

Flake — who took on Trump in a new book, “Conscience of a Conservative” — wouldn’t respond Monday morning after an East Valley Chambers of Commerce breakfast to questions about Trump’s tweet last week that Flake is “a non-factor in the Senate” and “toxic!”

“I don’t worry about it at all,” Flake said.

Flake also wouldn’t directly answer questions about whether Trump is right to seemingly endorse his primary challenger in his 2018 re-election bid. Trump, who has long criticized Flake and mused last year about spending $10 million of his own money to unseat him, praised Ward, a conservative former state senator who is already running against Flake, in a tweet last week.

For her part, Ward is expected to attend the rally Tuesday, though as part of the general public, her spokeswoman Jennifer Lawrence told CNN.

Trump’s tweet said it is “great to see” that she is running against Flake.

“That’s not my realm. That’s somebody else’s,” Flake said. “I just — I’m running my own campaign. It’s going well. And what the President does, that’s his prerogative.” 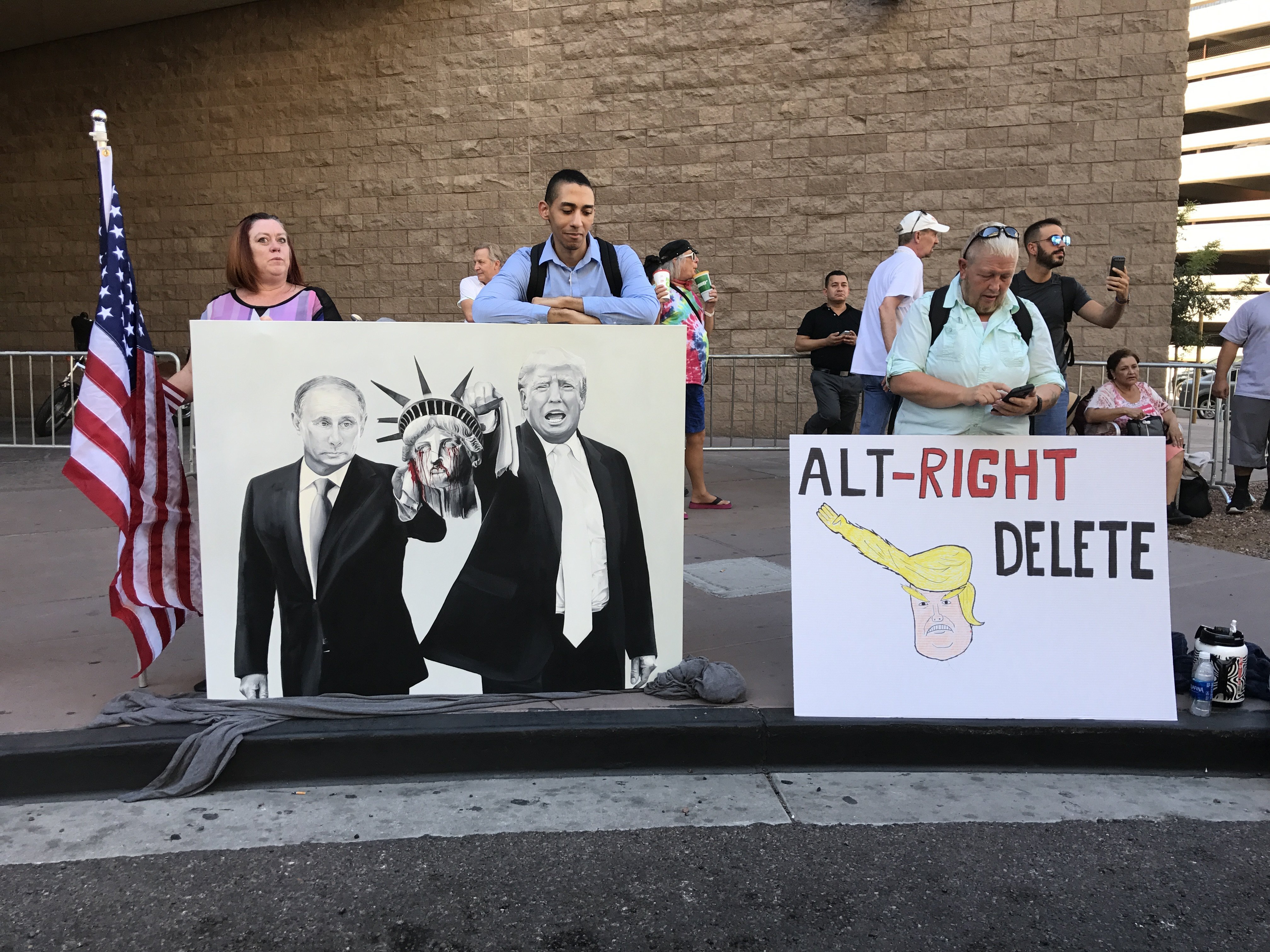