Rescue workers in Houston and other parts of Texas renewed search efforts Sunday for residents trapped in their homes by Tropical Storm Harvey’s rising floodwaters.

More than 1,000 people were rescued overnight from record flooding in the area, authorities said. The storm so far has killed two people in Texas, said authorities, who added they expect the death toll to rise.

Law enforcement agencies advised people trapped in their houses not to take shelter in their attics unless they carried axes so they could break through to their roofs and within sight of rescue workers.

Here are the latest developments:

People told CNN they were stranded in houses and hotels and hoped for help now that morning has come to Texas.

“We are still stranded in our home with little kids and the water keeps rising,” Houston resident Janet Castillo told CNN on Sunday morning. “We have called already to several numbers but no luck. We have (tried) but their lines are all busy or they don’t answer.”

Jake Lewis said he woke up to ankle-deep water in the Houston hotel where he was staying.

“We have nowhere to go,” said Lewis, of New Braunfels, Texas. “If you go out and look at the service road it’s flooded. I have a 2016 Chevy Silverado and the water is up to the door panels. The water keeps rising.”

One of two confirmed fatalities in the ferocious storm happened in Houston when a woman drove her vehicle into high water, city police said. Police said they believe the car became inoperable or the water was too high to pass through. The victim got out of her vehicle, was overtaken by floodwaters and drowned. 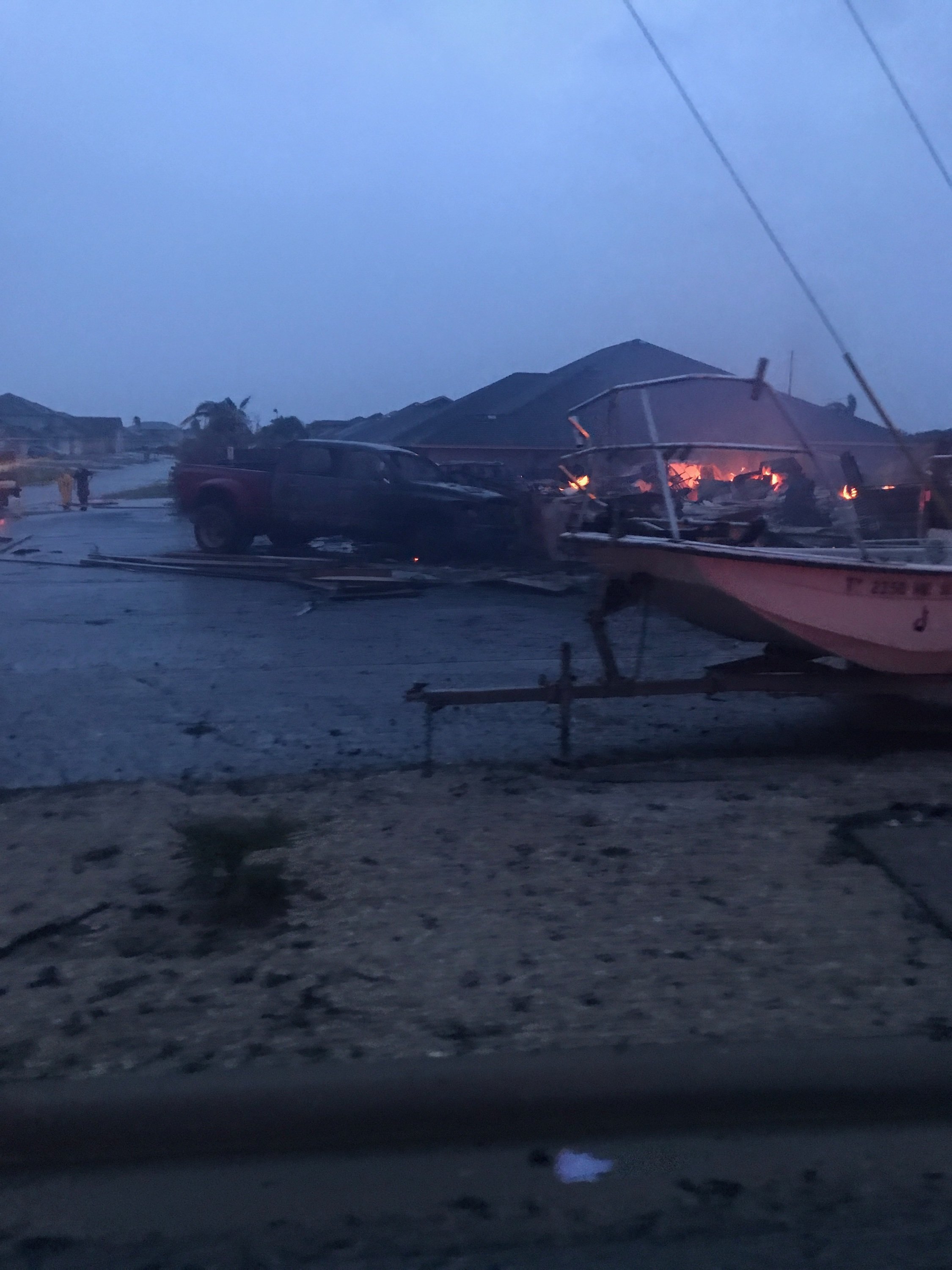 Harris County Sheriff Ed Gonzalez urged people to think twice before they leave their house and wade through water.

“The instinct is to want to exit out and just try to go find safer ground somewhere, but sometimes the water could be more treacherous,” he said, noting that manhole covers may have lifted.

Mayor Turner advised residents in the country’s fourth-most populous city with that even if floodwater made its way into their homes, they should stay put, unless the water poses a danger.

“If water gets in but it’s not life threatening, I’m going to ask you simply stay put. Do not get on the roadway,” he said.

Lt. Craig Cummings of the Texas Department of Public Safety said it took him two and a half hours to go 20 miles in Houston on Sunday.

“There’s 60 barricaded locations as of midnight. Most thoroughfares are impassable. Several hundred structures are flooded, and we are expecting that number to rise,” he said.

Houston authorities are stretched to their limits, as 911 operators have received more than 2,000 calls requesting rescue, Turner said. Houston Fire Chief Samuel Peña adds that they have responded to 2,500 calls and have about 1,000 more waiting to be serviced. The mayor asked residents to use restraint in calling 911.

“I know people who call 911 may not be getting a response. Let’s give preference to the life-threatening calls,” he said.

Turner defended his decision not to order evacuations before Harvey made landfall Friday. Nobody was sure exactly where the storms would hit, he said.

“If you give an order to evacuate, you create a nightmare” if it’s not done right, he said.

Gonzalez said via Twitter that many rescues were taking place overnight in the Houston area and requests were coming in for high-water rescues. “Some involve children, others with medical issues. Trying to get to as many as possible,” Gonzalez said. Some people were rescued by airboats on Sunday morning.

One rescue involved a hospital transport for a person who had suffered a cardiac arrest. Several people were rescued from a vehicle on a highway.

People are tweeting their locations and asking for help.

One person, whose mom is diabetic and dad has heart disease, said on Twitter, “We need help!! My house is flooded.”

Harvey blasted ashore as a Category 4 hurricane around 11 p.m. ET Friday just north of Corpus Christi. Once ashore, it lost wind speed and was downgraded to a tropical storm.

Still, Harvey spawned tornadoes and lightning, with extensive damage reported. A flash flood emergency was declared for sections of Houston, where more than 24 inches of rain fell in 24 hours, the National Weather Service said.

The weather service said maximum sustained winds Sunday would be near 45 mph. Some weakening is forecast over the next few days, and forecasters in the latest advisory say the storm is likely to become a tropical depression by tonight.

But authorities say now is not the time to relax.

The slow-moving storm is expected to drop 15 to 25 inches of rain over the middle and upper Texas coast through Thursday, and there could be isolated storms that reach 50 inches of rain, according to NOAA’s National Hurricane Center. “Rainfall of this magnitude will cause catastrophic and life-threatening flooding,” the weather service said.

Some Houston residents are comparing Harvey to Allison, a storm that struck the Texas coast in June 2001 and killed 23 people in the state.

“I was here for Allison,” Houston resident Pat Napolio told CNN. “Allison was bad. Really really bad, but if it (the water) creeps up anymore, Harvey will surpass (Allison).”

Another fatality was reported in the hard-hit coastal city of Rockport, where a person died in a house fire during the storm, Aransas County Judge Burt Mills said Saturday afternoon. “We didn’t know about it until today,” he said.

With dire warnings of tornadoes, torrential downpours and days of flooding to come, broad swaths of southeast Texas were littered with uprooted trees, toppled signs, flagpoles snapped like toothpicks and clusters of bricks peeled like scabs from walls and rooftops.

Additional fatalities were feared in Rockport, where an estimated 5,000 residents had stayed put for the storm, Aransas County Sheriff Bill Mills said.

Callers to the local emergency dispatch line told of walls and roofs collapsing across the city. An official there had warned those who opted to stick out the storm to write their Social Security numbers on their arms for body identification.

Shortly after Harvey became a tropical storm, with sustained winds of 70 mph, Saturday afternoon, Gov. Greg Abbott told reporters that the state had more than 1,000 workers involved in search and rescue operations.

Some places even far inland were predicted to get as much as 40 inches of rain through Wednesday.

While the worst of the storm surge had ended by midday Saturday, the coastal flooding threat was due to increase as already-swollen rivers and bayous are pounded with heavy rain, CNN meteorologist Michael Guy said. Sea water pushed onshore also won’t recede quickly, he said, meaning “this is going to be a long, ongoing flood event.”

Brock Long, director of the Federal Emergency Management Agency, said Saturday that Harvey would leave areas “uninhabitable for weeks or months,” echoing language last seen ahead of Hurricane Katrina in 2005.

Appearing Sunday on CNN’s “State of the Union,” Brock said FEMA is already gearing up for a years-long effort. “FEMA is going to be there for years,” he said.

Taking shelter and bracing for rain

In San Antonio, about 950 people took refuge in shelters, Woody Woodward, a spokesman for the city fire department, told CNN, adding that there was still plenty of space for more people.

Ten critically ill babies in Corpus Christi were taken to a hospital in North Texas ahead of the storm, the Cook Children’s Hospital in Fort Worth said in a statement.

“All our babies made it here safely,” Dawn Lindley, a registered nurse with Children’s Health Transport Team, told CNN.