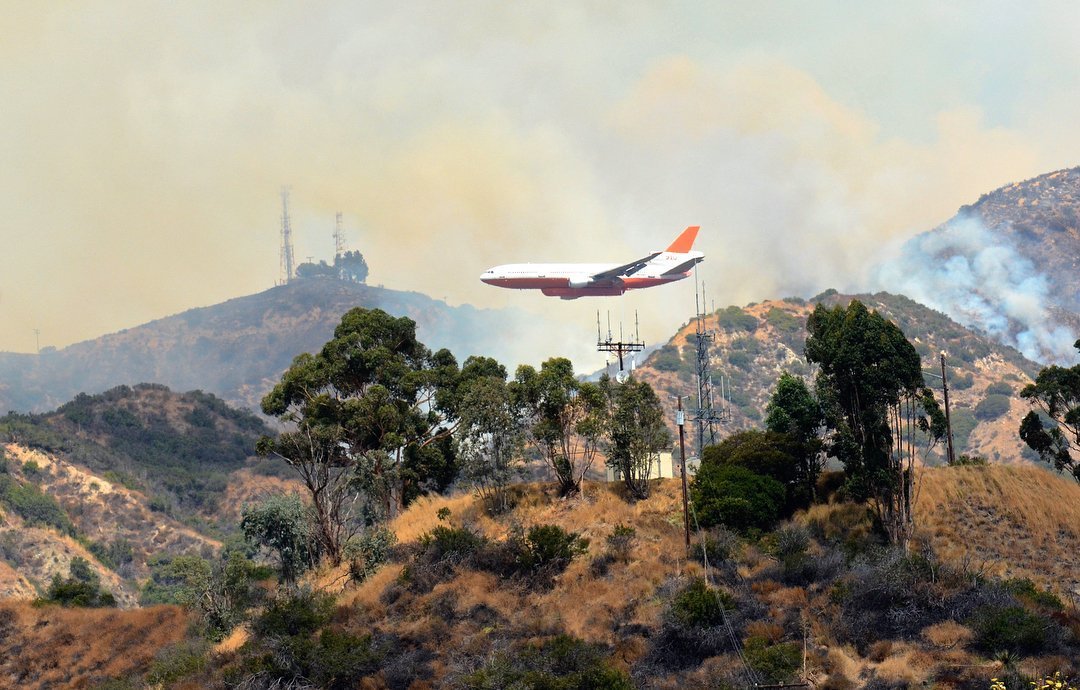 But the man who spoke them Monday morning, Los Angeles Fire Chief Ralph Terrazas, also warned that the winds could easily rekindle the La Tuna fire that burned 7,000 acres over the weekend.

Terrazas predicted that by late afternoon he would be able to report that La Tuna’s cinders smoldering near Burbank were well over 30% contained. The fire was only 15% contained as of early Sunday.

“There’s still a lot of work to be done,” he said.

By Monday evening, the fire remained 30% contained, though fire officials were still optimistic the figure would grow. The steep terrain and earlier weather conditions posed challenges to fighting the blaze, fire officials said.

Terrazas said bulldozers and hand crews would work to clear a line — removing all brush and other fuel the blaze would need to keep burning — from the remaining perimeter around the fire in the foothills north of Los Angeles.

The bulldozers will also work to clear catchment basins that help prevent flooding, he said.

Interstate 210, a major thoroughfare, was reopened after being partially closed since Friday, and Terrazas warned drivers that they might experience hand crews working on the outside lanes of the highway.

Monday’s weather was working in firefighters’ favor. It was overcast with a high of 86 Fahrenheit, relative humidity of 40% to 45% and winds moving at 10 mph or less.

“As long as the weather continues to cooperate, I’m very confident and convinced we’ll be fine,” Terrazas said.

Terrazas predicted the fire’s acreage, which he said makes La Tuna the worst fire Los Angeles has seen since the 1961 Bel Air blaze, would “increase slightly” in coming days.

(Los Angeles Mayor Eric Garcetti previously tweeted that the La Tuna fire was the largest, acreage-wise, in the city’s history, but it appears the Sylmar, or Sayre, fire of 2008 was larger than both La Tuna and Bel Air.)

While firefighters faced issues with the winds making the fire unpredictable Sunday, they also had problems with a “drone incursion,” the chief said.

The drone was turned over to law enforcement, he said, and authorities are looking to arrest the owner. Terrazas reminded residents that if fire crews detect a drone in the air, helicopters and fixed-wing aircraft are grounded and can’t be used in the firefighting effort.

“If a drone is in the air, we cannot fly,” he said. “A drone hitting a rotor blade can bring down a helicopter.”

California Gov. Jerry Brown issued a state of emergency for Los Angeles County on Sunday. His declaration allows state personnel and equipment to be used in fighting the fires, at the direction of the California Office of Emergency Services.

The Los Angeles Fire Department said in a statement Sunday that all mandatory and voluntary evacuations had been lifted.

Firefighters are also experiencing some fatigue, the fire chief said.

More than 1,000 firefighters from throughout California have been battling the fire, which has destroyed four single-family homes and three other buildings, Terrazas said,

There were 206 fire engines and nine helicopters dedicated to fighting the fire, Terrazas said.

The fire started Friday and tore through the La Tuna Canyon Park area of the Verdugo Mountains, the Los Angeles Fire Department said.

Mayor Garcetti signed a declaration of local emergency Saturday instructing city agencies to “take all necessary steps to protect life and property in the area.”

“The La Tuna Canyon Fire is an emergency that requires all available resources to protect our residents and keep our homes and other structures out of harm’s way,” Garcetti said in a statement.

Rain on Sunday was a mixed blessing, Terrazas said, as it brought much-needed moisture, but also strong winds that blew the fire around.

At least 100 firefighters who were sent to Houston to help with Hurricane Harvey recovery efforts were heading back to California to help with the fire, Terrazas said.

High temperatures and winds through the weekend contributed to the “large plume growth and extreme fire behavior,” said the National Weather Service office in Los Angeles.