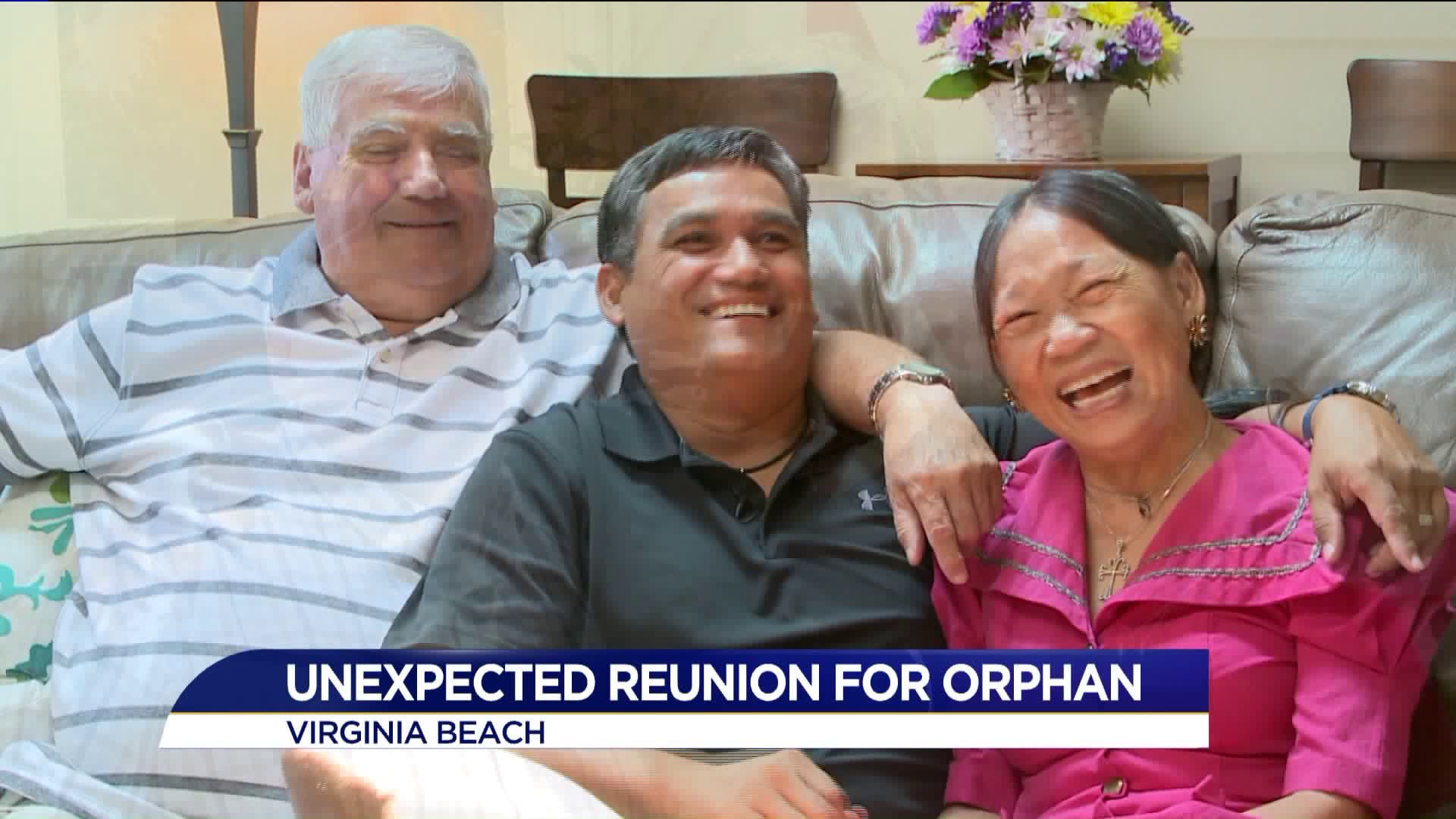 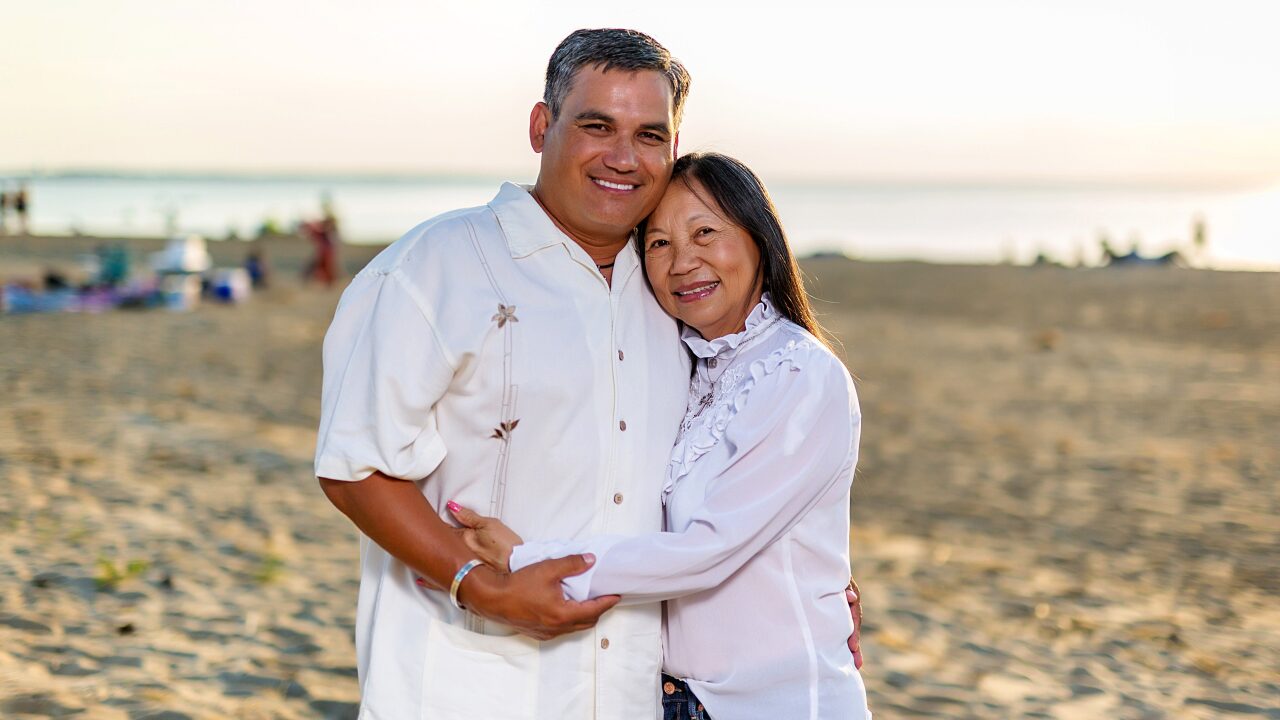 VIRGINIA BEACH, Va - Catching the perfect wave, running along the beach and fishing are some of Kirk Kellerhals' favorite pastimes. He's a man who has plenty of vitamin "sea" and has the tan skin to prove it.

"With me being half Vietnamese, the other half was just that big question mark. With my love for the beach, my dark skin and loving the Polynesian lifestyle and having visited Hawaii once. I claimed Hawaii as my second half," said Kellerhals.

Kellerhals was born in Vietnam during the tail end of the Vietnam War.  He was adopted out of an orphanage in Da Nang when he was two-years-old by an Army Major. He said he had a notion, whether it was real or imagined, his parents died in the war and that's why he was adopted from the orphanage.

"This was not a case where I was looking for my parents. I thought they were gone, I thought they were dead. I was very grateful for the family I had. I grew up in a very loving home and never went without. I had more opportunities than probably most kids my age," said Kellerhals.

Kellerhals' wife, who is Filipina didn't believe Kellerhals was half Hawaiin. She thought he was half Filipina, so Kellerhals submitted a Family Tree DNA test to settle the dispute. A month later, Kellerhals was in Tennessee at his son's graduation, when he got an email about a child parent match. Kellerhals thought it was a scam.

"The name was a foreign name, Nga and the last name was Nibblett. Not being real familiar with Vietnamese, I thought Nga was an African name. The first thought that went through my mind was oh great this is some Nigerian prince who wants me to hold on to his millions of dollars for a small commission so I ignored it. But the crazy thing is I didn't delete it," said Kellerhals.

After looking into the email from Family Tree DNA, Kellerhals realized what was happening.

"It suddenly dawned on me. This is probably my Mother. There is no way. This is impossible. She’s dead," said Kellerhals.

According to Kellerhals, the chances of the match were one in two billion.

Almost 50 years ago, a young man named Skip Soule was in the Air Force serving in Da Nang, Vietnam.  That's where he met Nga.

"I do remember the first time I saw his Mother. She’s pretty now, but she was really gorgeous then. Of course, we hit it off right away," said Soule.

The two got very close and before Soule left Vietnam, he gave Nga his contact information. But her family destroyed it.

"Next thing I know my stomach is getting bigger. And that's when I realized I'm going to have a baby," said Nga Nibblett.

She named her son Tran Van Hung, but her father and brother took him away to an orphanage. She went and got him back. She raised him for seven months, but then she returned home one day and her son was gone.

"From that day, I block out. I completely block out because I didn't know where my son was," said Nibblett. But she refused to give up. "I have heard God’s word himself. He told me I know where your son is. You don't know it, but I know it. And because of that voice that I heard, I keep holding onto that," said Nibblett.

Her search was exhausting and painful. When she first came to America, she would look through phone books to see if she could find her son's name. Then, thanks to technology and computers she started searching digitally. Then, came the DNA tests. There were two men who reached out to her, thinking they were her son. They were not.

A few days before Mother's Day 2017, Nibblett and Kellerhals spoke for the first time. They ended their phone call with "I love you's" and called each other Mom and son.

"After talking with her for less than five minutes I knew. I was in shock. That's the only way to describe it," said Kellerhals.

Then, right before Father's Day, Kellerhals called his Dad, but not without some apprehension. He initially had his half-brother reach out to Soule first.

Soule remembers that phone call vividly. "I have never had such an instant bond with any person in my life. As we made that connection the second or third time. There's something there really super special," said Soule.

This August was the first time all three of them were in the same room together, ever.

They sat on Kellerhals' couch in his airy and bright living room. All three of them couldn't stop smiling.

"I've definitely got his nose and ears. And his hair line. I can tell you when I first saw pictures of him, I saw the head full of hair and I said, “Thank God!” Kellerhals then looked at his Mom. "I got her smile and eyes. Wish I had half her strength," he said with love.

The three of them agree it could not have happened any better. Any sooner and the three of them might not have been ready. There are countless stories where children and parents reject each other. But not here.

"If you asked me many years ago, yes I am bitter, but now I'm getting older, I'm getting wiser and God showed me mercy and love can conquer anything," said Nibblett.

That's something the whole family, which for Kellerhals now includes new siblings and more nieces and nephews than he can count, can attest to.

"That big gaping black hole of not knowing who I am, where I came from or if I had existing relatives. Just to have that gap filled and I'm still trying to process it, but I still have to wake up every morning and remind myself this is not a dream. This is real."