Irma destroyed about 25% of houses in Florida Keys, FEMA says

Initial estimates indicate 25% of the houses in the Florida Keys have been destroyed, and 65% have major damage, said Brock Long, the Federal Emergency Management Agency’s administrator.

“Basically, every house in the Keys was impacted some way,” Long said Tuesday. He said the numbers are early estimates and could change.

Irma left a trail of devastation throughout the Southeast, killing at least five people in the US, flooding major cities including Jacksonville, Florida, and Charleston, South Carolina, and leaving millions without power.

On Monday night, Irma was downgraded from a tropical storm to a tropical depression as the storm lumbered 95 miles south-southwest of Atlanta, Georgia. Irma is expected to turn toward Alabama and then into western Tennessee.

Jacksonville grappled with a record storm surge on Monday, prompting the Coast Guard to deploy boats to rescue residents.

Meanwhile, evacuees in Florida were anxious to return and see how their homes weathered the storm. But officials urged patience.

He said that standing water remains an issue over the entire peninsula. 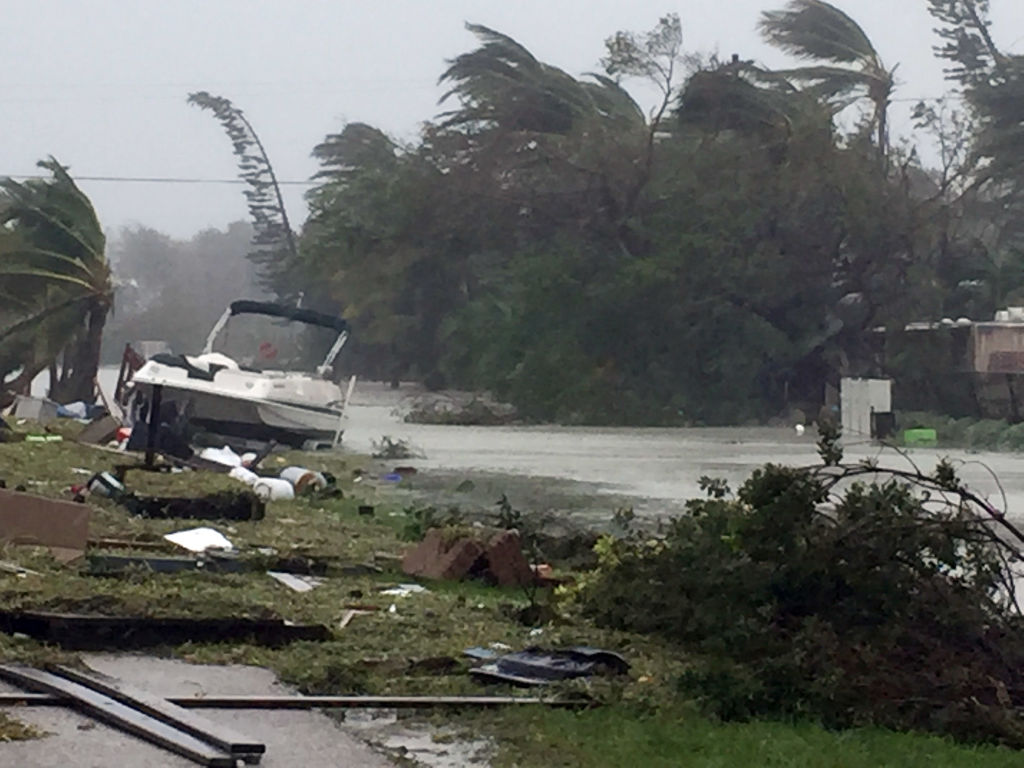 — As of Monday night, the tropical depression was centered about 95 miles south of Atlanta, with maximum sustained winds of 35 mph, the National Hurricane Center said.

— Five storm-related deaths have been reported.

Georgia: Three deaths reported. A 62-year-old man who was on his roof was killed in Worth County, which experienced wind gusts of 69 mph, according to Kannetha Clem, a spokeswoman for the Worth County Sheriff’s Office. Another man was killed in Sandy Springs, an Atlanta suburb, when a tree fell and “literally cut the home in half,” said Sharon Kraun, the city’s communications director. A woman was killed when a downed tree struck her vehicle in Cumming, north of Atlanta, as the car at in a private driveway, the Forsyth County Sheriff’s Office. Florida: One driver died in a car accident on State Road 417, said Orange County Fire Rescue Chief Otto Drozd. South Carolina: A 57-year-old South Carolina man was fatally hit by a falling tree limb during the storm, Abbeville County Coroner Ronnie Ashley told CNN.

— Massive power outages remain throughout the Southeast. These figures are as of Tuesday 5 a.m.:

The places where Irma made landfall

Irma triggered evacuation orders for 5.6 million people before it made two landfalls in the Florida Sunday.

The full extent of the damage is still unknown. Officials said they were working to clear roads and bridges.

“Stay off the roads, stay off the streets, let us complete our assessment, clear the roads of water, power lines, trees and then you can get out there and determine what happened to your individual property or your neighborhood,” Fort Lauderdale Mayor Jack Seiler told evacuees.

Officials were struggling Monday to reach areas of the Florida Keys, as some of the islands were difficult to access.

Although access to the Keys is closed to the public, Monroe County will reopen access points to residents and business owners in Key Largo, Tavernier and Islamorada early Tuesday.

Thousands people who rode out the storm in the Keys remain there without water, power and communications.

Irma made landfall on the Florida Keys as a Category 4 hurricane Sunday, and again over Florida’s Marco Island as a Category 3, leaving the island without power and water, authorities said.

But in signs of gradual restoration of services, many of Florida’s airports are scheduled to re-open to limited operations on Tuesday. Florida Hospital, a health provider in the state, announced its plans to reopen many of its facilities that were impacted by Irma on Tuesday or Wednesday.

In the aftermath of Irma, the biggest threat this week will be river flooding in the northern part of the state, Gov. Scott warned.

Although rainfall stopped in Jacksonville Monday afternoon, the water began rising and washing into downtown.

The governor said on Monday that Jacksonville experienced 3 to 5 feet of surge, plus one foot of rainfall, which is causing “record and historical flooding along St. Johns River.”

The Jacksonville Sheriff’s Office placed a curfew on its beaches Monday night into Tuesday morning.

“Jacksonville is suffering what has been called … some of the worst flooding it has seen in 100 years,” National Security adviser Tom Bossert said Monday.

Irma flooded portions of the Battery, the downtown Charleston neighborhood, prompting police to ask residents to avoid the area.

“It’s been an extremely stressful day between all of the wind, tornado warnings, power outages and flooding downtown,” said Charleston resident Melissa Stehr, who waded through knee-deep water Monday.

Before slamming into the United States, Irma hit Cuba late Friday as a Category 5 hurricane. On Monday, Cuban state TV announced 10 hurricane related deaths — meaning Irma killed a total of 36 people in the Caribbean before heading to the US.

This is the first year on record that the continental United States has had two Category 4 hurricane landfalls in the same year.