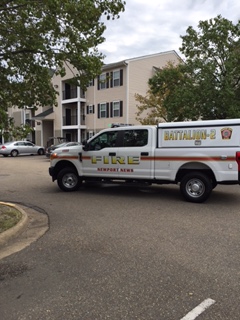 Dispatchers received the call at 10:30 a.m. Crews were able to extinguish the fire quickly without any injuries to firefighters or civilians.

After a preliminary investigation, it was discovered that the fire was caused by an electrical short that caused major damage to the electric meter base for the apartment building.

The Red Cross is assisting the residents who have been displaced.