Every detail of this indiscriminate mass murder seemed meticulously planned.

The selection of a hotel room overlooking a massive music festival, days before the attack. The cache of 23 weapons inside the gunman’s Las Vegas suite. And thousands of rounds of ammunition — plus an ingredient used in explosives — inside the killer’s home and car.

Yet no one knows why Stephen Paddock morphed from a retired accountant to possibly the deadliest mass murderer in modern US history. His relentless gunfire on country music fans at an outdoor concert left 59 people dead.

Another 527 people are still trying to recover from injuries — everything from gunshot wounds to stampede injuries suffered when 22,000 people tried to flee the gunman’s aim.

So far, police believe Paddock acted alone — which could make the motive harder to determine.

Authorities on Tuesday released the first body camera footage of police responding to the Sunday’s mass shooting in Las Vegas. Officers were seen hunkering down behind a wall facing Mandalay Bay Resort and Casino after an initial volley of shots fired by the gunman later identified as Stephen Paddock. The footage shows officers telling people to get down as police try to figure out where the rounds are coming from, said Las Vegas Metropolitan Police Undersheriff Kevin McMahill. “Go that way, get out of here! There’s gunshots coming from over there,” one officer is heard yelling. At one point, officers hunkered down next to a patrol vehicle on Las Vegas Boulevard, where one officer was shot, McMahill said. 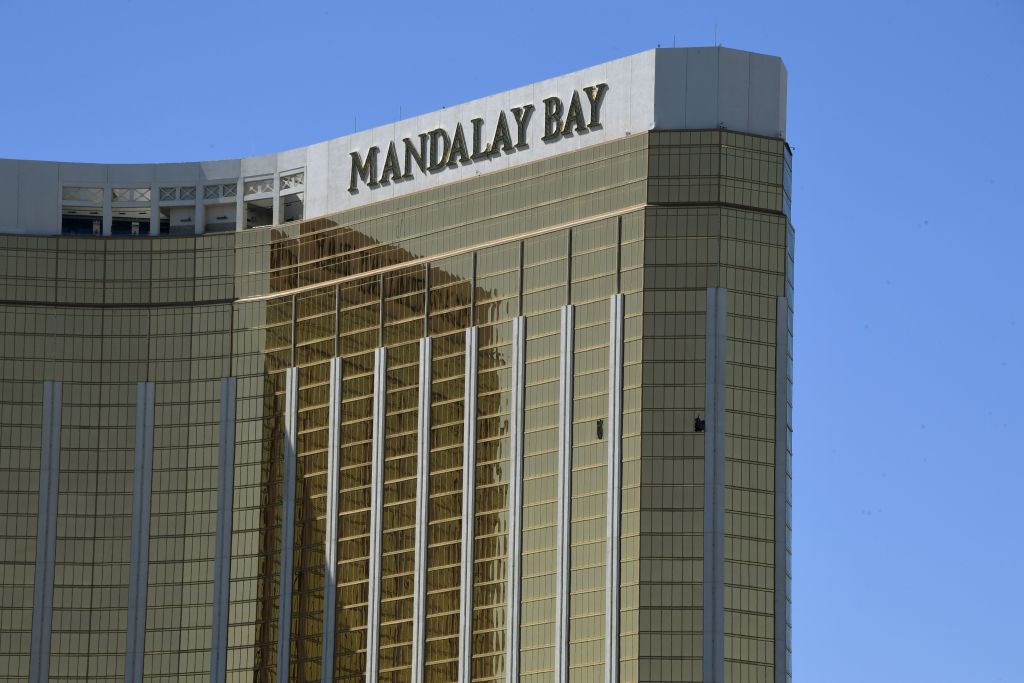 In the gunman’s 32nd-floor suite at the Mandalay Bay Resort and Casino, police recovered 23 weapons, including a handgun and multiple rifles — some with scopes on them.

And at Paddock’s home in Mesquite, Nevada, police found at least 19 firearms, explosives and several thousand rounds of ammunition.

— More than three dozen of the 58 people killed have been publicly identified. Among the latest: Charleston Hartfield of Nevada; Stacee Etcheber of California; Christopher Roybal of Colorado; Hannah Ahlers of California; and Jordan McIldoon of British Columbia, Canada.

— Clark County Coroner John Fudenberg said Tuesday night that 58 people were killed and the total of 59 given earlier included the deceased shooter.

— The Daily Mail newspaper of the UK has published several photos taken in Paddock’s room after the shooting. In one photo, the legs of a dead shooter can be seen on the floor. The photos show semiautomatic assault-style rifles on the floor and on furniture. Stacks of ammunition magazines used in rifles can also be seen.

— Paddock wired $100,000 to the Philippines, a law enforcement source said. However, officials haven’t able to see yet precisely when the wire happened or who was the recipient. The FBI is working with Filipino authorities to determine details.

— Authorities continued processing the scene of the killings, where shoes and bags lay scattered.

‘I felt him get shot in the back’

Heather Melton heard the noise interrupting the concert and told her husband, Sonny, she thought it might be gunfire. He, like most people, thought it was fireworks.

Then the bullets started ricocheting off the ground around the Tennessee couple. She wanted to get low; he said, no, we’ll get trampled.

So they ran, away from the gunfire, Sonny just behind Heather, until he was felled by a bullet.

“I felt him get shot in the back,” she told “Anderson Cooper 360.” There were bodies all over the ground.

“I was trying to talk to him and he wasn’t responding,” said Heather, an orthopedic surgeon. She said she got over him and started doing CPR. People said to get down. Sonny, a registered nurse, was bleeding from the mouth.

Heather Melton said she knew he probably was gone, but she wanted to hope.

Sonny was declared dead at the hospital.

“He was the most selfless person that I ever met, and even until his last breath he proved that,” Heather said.

Running back into danger

Country singer Jason Aldean was on stage when bullets started raining onto the crowd.

“On the main floor … there was no cover — they were all exposed,” survivor Dees Mansholt said. “So you didn’t know if somebody was shot or if they were laying down.”

Frantic concertgoers piled on top of each other, trying to get out of the shooter’s line of fire. But an off-duty nurse ran back into the danger to help those who had been shot.

“We went back because I’m a nurse and I felt I had to,” she told CNN affiliate KTNV. “I went to three different scenes, and by the time I got to the third one, there was just dead bodies.”

The nurse said she was far from alone.

“There was so many people, just normal citizens, doctors, cops, paramedics, nurses, just off duty. Everyone was just communicating and working together.”

“A lot of really good people (were) holding people’s wounds shut, trying to help them while everybody was just ducked down,” she said.

Paddock’s transformation from a retired accountant to mass murderer has mystified everyone — his brother, investigators and the families he victimized.

Police had no prior knowledge of the gunman before the attack.

“I don’t know how it could have been prevented,” Lombardo said.

The massacre has no known link to overseas terrorism or terror groups, a US official with knowledge of the case said.

And authorities say it’s too early to tell whether the massacre was an act of domestic terrorism.

“We have to establish what his motivation was first,” Lombardo said.

For an act to be considered terrorism, it must appear that it was intended to intimidate or coerce a civilian population, or try to influence political change.

The gunman’s brother, Eric Paddock, said he was “completely befuddled” by his brother’s actions.

He said Stephen Paddock was an avid gambler who had “no history of violence. No history of anything — couldn’t give a s*** less about politics, religion, pointy hatted people, etc, etc. He just wanted to get a freaking royal flush.”

By Tuesday afternoon, a GoFundMe page started by a Clark County commissioner had raised more than $3.5 million.

“Funds will be used to provide relief and financial support to the victims and families of the horrific Las Vegas mass shooting,” county commission chair Steve Sisolak wrote.

Throngs of blood donors lined up for hours to help the wounded.

“This is America — people coming together, helping out.” Hector Salas tweeted. “Likely more than 1000 people waiting in line to donate blood.

“It takes the worst of America to also see the best of America,” said Mansholt, who survived the gunfire. “Everybody was helping each other.”

Those looking for friends and family still missing after the attack can call 866-535-5654. Facebook has set up a crisis response page to help people determine whether their loved ones are safe.