It took nine to 11 minutes of gunfire for Stephen Paddock to carry out the deadliest mass shooting in modern US history.

From his 32nd-floor window at a Las Vegas hotel, Paddock fired a barrage of bullets at 22,000 concertgoers below — an attack that appears to have been meticulously planned.

The gunman checked into the room days in advance, stocked a cache of weapons there and set up cameras inside his hotel suite and in the hallway.

The first call reporting shots fired came at 10:08 p.m. Sunday, and the gunfire didn’t stop until at 10:19 p.m., Clark County Undersheriff Kevin McMahill said. The shooting went off and on for nine to 11 minutes, he said.

The massacre left 58 people dead and another 500 people with gunshot wounds or stampede injuries.

President Donald Trump landed in Las Vegas just after 9 a.m. (noon ET) Wednesday as investigators continued to search for clues as to the gunman’s motive.

Police believe Paddock acted alone when he sprayed spray gunfire on the crowd at the Route 91 Harvest festival, but it’s still not known why. 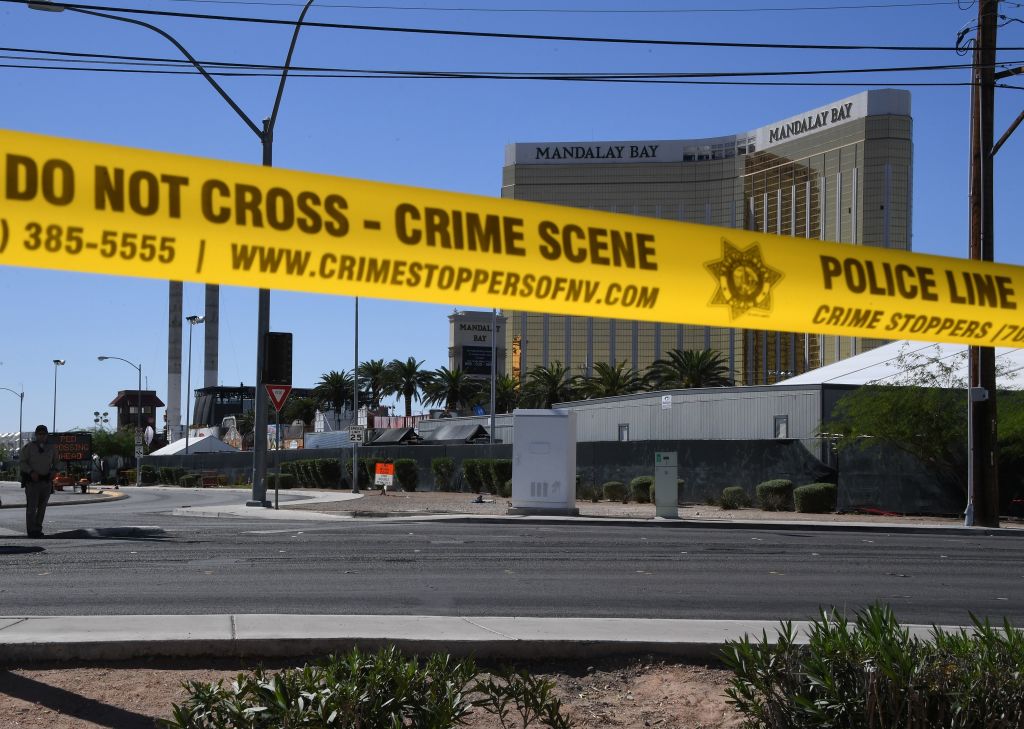 Marilou Danley said that she was worried her boyfriend, Stephen Paddock, was going to break up with her when he bought her a cheap ticket to the Philippines about two weeks ago, then wired her money to buy her and her family a house there.

But Danley, in a statement read by her attorney, said she didn’t know Paddock had planned to carry out a mass shooting.

In her first public remarks since Paddock killed 58 people and wounded more than 500 in Las Vegas on Sunday night, Danley said Paddock — a man she described as “kind” — never gave her any clues or any warning “that something horrible like this was going to happen.”

“It never occurred to me in any way whatsoever that he was planning violence against anyone,” she said in the statement.

Danley, who lived with Paddock in Mesquite, Nevada and was out of the country during the shooting, returned to the United States on Tuesday night from the Philippines and spoke to the FBI and the Las Vegas police, her attorney Matt Lombard confirmed.

“I will cooperate fully with their investigation,” she said in the statement. “Anything I can do to help ease suffering and help in any way, I will do.”

Danley’s statement sheds little light on what led the 64-year-old retired accountant to fire from his 32nd-floor hotel room window into a crowd of 22,000 concertgoers in the heart of Las Vegas.

Almost three days after the deadliest mass shooting in modern American history, investigators appear no closer to answering the question: Why?

Why did he continue firing with an arsenal of weapons for nine to 11 minutes?

At this point, Paddock’s motive and aims remain a mystery to investigators. FBI Deputy Director Andrew McCabe told CNBC on Wednesday that the lack of a clear motive was a “surprise” in this mass shooting.

“This one is somewhat different than many of the ones we’ve dealt with in the past, because we don’t have any immediately accessible thumbprints that would indicate the shooter’s ideology or motivation, or really what compelled him to get there,” McCabe said.

Police believe Paddock acted alone when he sprayed gunfire on the crowd at the Route 91 Harvest festival.

McCabe told CNN that the FBI was going through Paddock’s communications, financial records, associates and video surveillance — anything to try to piece together the puzzle of his motive.

“We will look at every one of those lanes, pull every possible thread,” he said.

Authorities are hoping to find answers from their interview with Danley on Wednesday.

Girlfriend ‘sent away’ before attack

In an interview with CNN affiliate Seven Network Australia, Danley’s sisters said that Danley did not know about the shooting and was “sent away” before the attack.

Danley’s sisters, who were not identified by name and whose faces were blurred, added that Danley would willingly cooperate with investigators.

“Of all the people that they have interviewed … no one can put the puzzles together — no one — except Marilou, because Steve is not here to talk anymore,” Danley’s sister said. “Only Marilou can maybe help to solve this investigation and what and why he’s done this.”

Paddock had wired $100,000 to the Philippines, a law enforcement source said, but officials haven’t been able to say exactly when the money transfer took place or who was the recipient. The FBI is working with Philippine authorities to determine details.

Danley did not say Wednesday how much money Paddock wired her.

President Donald Trump, who visited Las Vegas victims, first responders and heroes on Wednesday, offered his own analysis of the shooter’s motives.

“He’s a sick, demented man,” Trump said. “The wires are screwed up.”

Paddock’s violent transformation has mystified everyone — his brother, investigators and the families he victimized included.

Paddock, who was twice divorced, liked to gamble, and at one time had jobs at the US Post Office and the IRS, had no significant criminal history and was previously unknown to police.

President Trump said that America was a “nation in mourning” on Wednesday and praised the work of first responders, hospital staff, local leaders and the people of Las Vegas.

“Words cannot describe the bravery that the whole world witnessed on Sunday night,” he said. “Americans defied death and hatred with love and with courage.”

“When … the worst of humanity strikes, and strike it did, the best of humanity responds,” Trump said. “Parents and spouses used their own bodies as shields to protect their loved ones. Americans dashed into a hail of bullets to rescue total strangers.”

Separately, a GoFundMe for the victims of Las Vegas has raised almost $9 million as of Wednesday afternoon.

The evidence laid out by investigators so far shows Paddock meticulously planned the shooting.

He purchased 33 firearms, mostly rifles, between October 2016 and September 2017, according to an ATF spokesperson.

The gunman checked into the room days in advance, stocked a cache of weapons there and set up cameras inside his hotel suite and in the hallway.

The first call reporting shots fired came at 10:08 p.m. Sunday, and the gunfire didn’t stop until 10:19 p.m., Clark County Undersheriff Kevin McMahill said. The shooting continued off and on for nine to 11 minutes, he said.

Paddock had an arsenal of weapons in his hotel suite, including bump-fire stocks — legal devices that enable a shooter to fire bullets rapidly, similar to an automatic rifle.

He had outfitted 12 of his firearms with the bump stocks, said the Bureau of Alcohol, Tobacco, Firearms and Explosives.

The killer also had cameras set up inside and outside the suite. Police don’t know if the devices were transmitting — the FBI is investigating their use — but the Clark County sheriff said he thinks Paddock might have used them to watch for people approaching his room. One camera looked out the peephole on the suite’s door.

The hail of gunfire stopped when security guards approached Paddock’s room at the Mandalay Bay Resort and Casino, McMahill said. Paddock turned his attention to those outside his door and fired, wounding one of them.

The guard was “very heroic” and provided police with information about the shooter’s location, McMahill said. When officers entered the hotel room, they found Paddock dead. Authorities believe he killed himself.

David Hickey, president of the union representing the hotel’s officers, identified the wounded guard on Wednesday as Jesus Campos.

Paddock had barricaded the stairwell doors and pointed his makeshift cameras system toward the elevator as Campos approached, said Hickey, head of the International Union, Security, Police and Fire Professionals of America.

Campos, who was shot in the right leg, was out of the hospital on Wednesday. He was expected to have a round removed from his leg at a later date, Hickey said.

The union has seventeen armed officers at Mandalay Bay. Hickey was uncertain if Campos was armed.

They show semi-automatic assault-style rifles on the floor and on furniture. Stacks of ammunition magazines used in rifles can also be seen. One photo shows Paddock’s legs splayed on the floor near several weapons, apparently after he killed himself. Police said they’re investigating the source of the leaked photos.

The rifles in the photographs were far from the gunman’s only weapons. A total of 47 guns have been recovered from three locations: Paddock’s hotel room and his two Nevada homes in Verdi and Mesquite.

Authorities also found thousands of rounds of ammunition in Paddock’s Mesquite home, and an ingredient used in explosives was discovered inside the killer’s car.