NEWPORT NEWS, Va. - Newport News Police are investigating a burglary that occurred at a home in the 100 block of Rexford Drive on October 3.

Surveillance video from the resident's home captured images and video of a man on the property at the same time as the burglary. 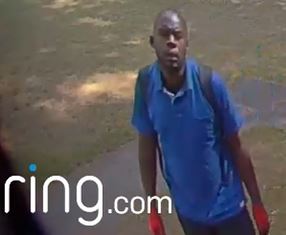 The man rang the doorbell just before someone entered a side window of the house.

The man is described as a bald black male wearing a blue shirt, dark pants, white shoes and red gloves. He was also carrying a backpack.

Anyone with any information on the burglary or the man's identity is asked to call the Crime Line at 1-888-LOCK-U-UP.