Texas church shooting leaves 26 dead, including 8 members of one family

At least eight members of the same family were among the 26 people killed Sunday when a man armed with a rifle burst into the sanctuary of a church in Texas and started firing.

The mass shooting left about 20 others wounded at the First Baptist Church in Sutherland Springs, about 30 miles east of San Antonio.

The massacre killed about 4% of the small town’s population. And no one at the church was left unscathed, Wilson County Sheriff Joe Tackitt said.

“I think nearly everyone had some type of injury,” the sheriff told reporters Monday.

Texas Gov. Greg Abbott called the slaughter “the largest mass shooting” in the state’s history. But it’s still unclear what motivated the killer. 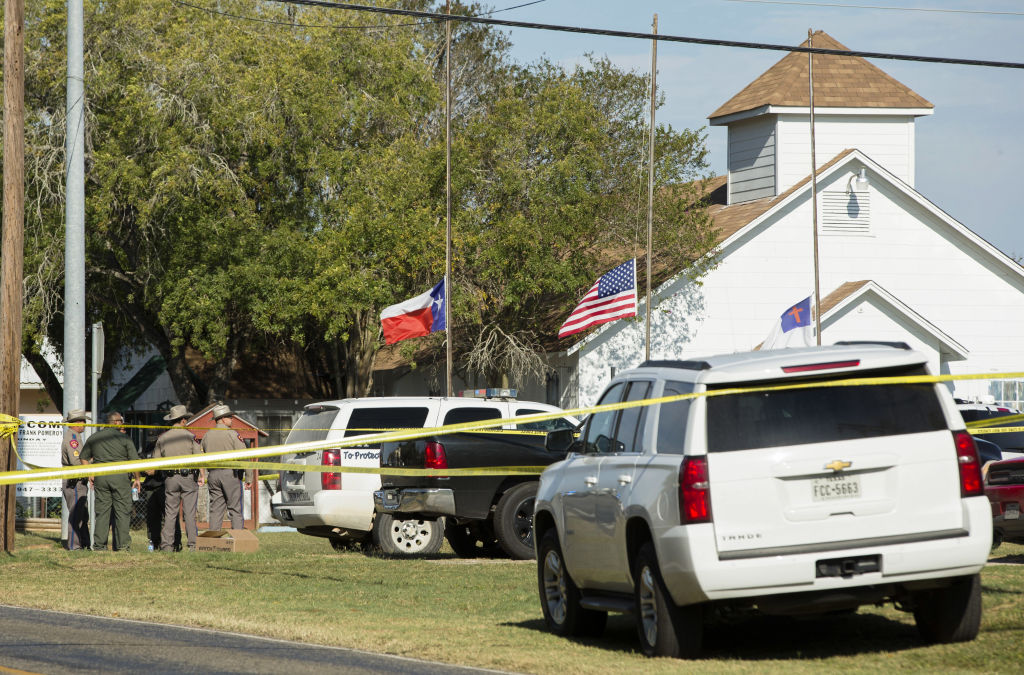 —  Kelley killed his grandmother-in-law, Lula White, in the massacre Sunday, multiple friends told CNN. White was the grandmother of Kelley’s wife and volunteered frequently at the church, according to friends and her Facebook profile. The friends asked not to be named as the family has decided to not speak to the media about White’s death at this time, though a few have posted on social media.

— The killer had in-laws who attended the church — but those in-laws were not present at the time of the massacre, the sheriff said.

— Before the shooting, Kelley looked suspicious at a nearby gas station. “He was obviously suspicious to others based on the way he was dressed in all black,” Martin said. He said Kelley also had a black mask with a white, skull-type face on it, but it was unclear whether he was wearing the mask at the gas station. Kelley was wearing a ballistic vest with a plate on the front, Martin said.

— The shooter was first shot by an armed resident who confronted the gunman outside the church and shot him. The suspect then turned the gun on himself, authorities said. He was dressed in all-black tactical gear, including a ballistic vest, and was later found dead in his vehicle.

— The civilian who shot Kelley aimed for the killer’s side because he noticed Kelley’s body armor did not protect the side of his body, said Ken Leonard, whose cousin shot Kelley. After Kelley was shot, he called his father, telling him he didn’t think he was going to make it, Martin said. That’s when Kelley shot himself.

— The victims ranged in age from 18 months to 77 years old, said Freeman Martin, a regional director with the Texas Department of Public Safety. The visiting pastor was among those killed, Tackitt said.

— Ten of the 20 people wounded remain in critical condition Monday, authorities said. And virtually no one at the church was left unscathed, Tackitt said. “I think nearly everyone had some type of injury,” the sheriff told reporters Monday.

— The 14-year-old daughter of the church’s pastor was among those killed, said Sherri Pomeroy, the girl’s mother. Her parents were traveling out of state when the shooting occurred.

— At least eight of the people killed were members of one family, according to a relative and a community leader. A woman who was about five months pregnant and three of her children were killed. The pregnant woman’s brother-in-law and his young child were also killed, according to the community leader. Three other members of the same family were wounded. CNN is not naming the victims at this time, as it isn’t yet confirmed that their next-of-kin have been notified.

— A witness told CNN affiliate KSAT that he and the armed resident pursued the gunman in a car chase for about 11 miles.

— Investigators have reviewed video footage from inside the church, Martin said.

— Speaking from Japan, President Donald Trump expressed condolences for the victims during a Monday news conference and said he believes the shooting was caused by a “mental health problem,” not an issue with US gun laws.

Who is the shooter?

The gunman has been identified as 26-year-old Devin Patrick Kelley, according to two law enforcement sources who have been briefed on the investigation.

But police have not officially named Kelley as the shooter. They described the gunman as a white man in his 20s. Authorities have not said what the motive was.

Kelley was a member of the US Air Force and served at Holloman Air Force Base in New Mexico from 2010 until his discharge, according to Air Force spokeswoman Ann Stefanek.

He was court-martialed in 2012 for assault on his spouse and assault on their child, according to Stefanek. He served a year in confinement, received a bad conduct discharge and had his rank reduced, she said.

He drove across the street, got out and began firing even before he entered the church, Martin said.

David Flores told CNN that his father saw the shooter.

“My dad saw the gunman run into the church building and then he heard shots and saw people running,” Flores told CNN. “People covered in blood and screaming. It was pandemonium everywhere.”

As the shooter left the church, a local resident used his own rifle to engage him, Martin said. The gunman dropped his weapon and fled.

Johnnie Langendorff said he was driving to his girlfriend’s house when he saw the shootout between the shooter and the armed resident.

The gunman took off in a Ford Explorer, Langendorff told CNN affiliate KSAT.

The resident “briefed me quickly on what had just happened and said we had to get him, and so that’s what I did,” Langendorff said.

They gave chase in his truck and called police. As they sped after him, Langendorff said, the shooter “eventually lost control on his own and went off into the ditch” in neighboring Guadalupe County.

“The gentleman that was with me got out and rested his rifle on my hood and kept it aimed at him [shooter], telling him to get out. There was no movement, there was none of that. I just know his brake lights were going on and off, so he might’ve been unconscious from the crash or something like that. I’m not sure.”

Law enforcement later found the suspect dead of a gunshot wound inside his vehicle.

A law enforcement official briefed on the investigation said multiple weapons were found in the shooter’s car. The FBI and the Bureau of Alcohol, Tobacco, Firearms and Explosives are involved in the investigation.

Hours after the shooting, residents of Sutherland Springs hugged one another, held candles and sang hymns in a vigil Sunday night. Abbott attended the event, in which faith leaders offered words of solace and prayers.

Sutherland Springs is the kind of place where “everybody knows everybody,” said Gloria Rodriguez Ximenez, who attended the vigil.

“This is a small, Christian town, a very small community,” she said. “Everybody’s united. Everybody’s so close to everybody.”

She knows the First Baptist Church’s pastor and his family, including their daughter who died.

“I can feel the pain everybody’s going through. There’s so much hurt for a small town,” Ximenez said.

Others echoed the feeling of shock and heartache.

“My heart is broken,” Wilson County Commissioner Albert Gamez Jr. told CNN. “We never think where it can happen, and it does happen. It doesn’t matter where you’re at. In a small community, real quiet and everything, and look at this.”