They purchased paradise…then gave it all away 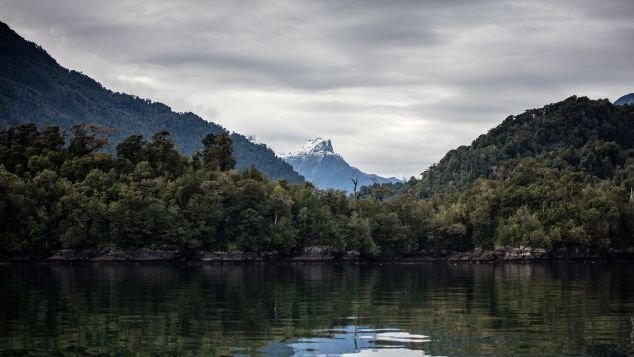 This is the story of the couple who purchased paradise, the neighbors who curse their name and the idea that might save life as we know it.

It’s the story of how a climber who could afford his own mountains and a paddler who could buy her own rivers fell in love, pooled their fortunes and bought 2 million acres worth of fjords, volcanoes, pumas and killer whales.

Then, they pledged to give it all away.

Doug Tompkins and Kristine McDivitt should have fallen in love sooner. But if the timing was late, the setting was perfect.

He was a high school dropout-turned-billionaire; with his gang of fellow thrillseekers nicknamed the Fun Hogs, he lived to climb big rocks and surf big waves. After outfitting his own adventures, he started a company called The North Face.

She was a California girl with a love for the outdoors and a head for numbers. As the right hand of another legendary Fun Hog named Yvon Chouinard, she helped turn his company, Patagonia, into a global brand.

Despite their mutual friends and passions, it took a trip to a remote corner of Patagonia — the rugged and breathtaking region in southern South America — to bring them together. Doug was 50, Kris was 43 and after a whirlwind week together amid the mountains and fjords of southern Chile, she retired as CEO, packed two bags and moved into his off-the-grid cabin. There were no phones or Internet, no friends or family, and the nearest road was an hour away by boat.

But they had each other — and they had Doug’s plane, a tough, single-engine Husky, perfect for landing on short, remote runways.

With both of them passionate about the planet and conservation, Doug and Kris started shopping for land in some of the wildest corners left on Earth. Their mission? To protect the precious parts of the world that their fellow humans were not.

They could afford this because Doug had amassed a fortune. After selling The North Face in 1968, he helped his first wife create the fashion brand Esprit. And as his wealth grew, he built one of the most valuable private art collections in the world.

But even as he reached the top of the design world, Doug wasn’t happy. Every chance he got, he’d flee the boardroom for a fast river or a tall rock in the wilds of South America.

These trips and his voracious appetite for environmental literature led to an almost religious conversion into deep ecology — a belief that unspoiled wilderness is more valuable than any of the minerals or timber that can stripped from it, and that humanity, in its current state, is doomed.

If biodiversity is the best measuring stick for life on Earth, he believed, then there are just too many people consuming too much stuff and not enough planet to keep up. So in 1989, he cashed out hundreds of millions in stock, began selling his art and buying land.

Together, Doug and Kris Tompkins bought enough of Chile and Argentina to hold Rhode Island and Delaware. They let cattle ranches go wild and removed timber operations. They reintroduced wild pumas and jaguars. And they fought the development of an electrical project that would have dammed two of the wildest rivers in Patagonia.

All of which made the locals very suspicious.

Some believed they were going to melt the glaciers and sell the water to China. Another conspiracy theory has them creating a second Israel in the mountains of Chile, to shelter the world’s Jews after World War III.

But the Tompkins’ real plan was equally ambitious. They wanted to protect as much South American biodiversity as they possibly could by creating a network of national parks on par with those in the United States.

In March, Kris Tompkins stood not far from their first cabin and handed over 1 million acres to the people of Chile. President Michele Bachelet vowed to set aside another 9 million adjacent acres, creating a preserve the size of Switzerland and the sixth new national park created by the Tompkins in South America.

But the joyful ceremony was missing the key player in this love story. In December 2015, Doug had joined Yvon Chouinard for a Fun Hog reunion. They were paddling on a huge glacial lake when the weather turned and Doug was tossed into the freezing water. After more than an hour of struggle and frantic efforts to revive him, Doug Tompkins lost his life to the wild land he loved so much.

“When he died, he took the best of me with him, and I kept the best of him with me,” Kris Tompkins told me in the first TV interview after his death. “I carry him around with me in the pocket of my heart. But he left me with so much.”

Two weeks after his passing, Doug was named an honorary citizen of Chile, but tough politics remain. Some lawmakers see the Tompkins’ efforts as some sort of imperial land grab and continue to resist their conservation efforts.

But Kris vows to carry forward her husband’s vision of a human race that can live in harmony with its natural surroundings.

“I study the failed civilizations as a hobby, because I am so confounded by our inability to manage ourselves as a species in a way that prolongs a healthy future,” she said, eyes intense. “You don’t have to have five televisions. You can live differently to ensure that the non-human world stops disappearing at a rate that is incalculable at the moment. See, for me, it’s a moral issue. It is a way of looking at things and saying, ‘Stop. I stop here. For me it’s not OK.'”