US general leads troops out of Puerto Rico

The three-star general is leaving Puerto Rico, ending his mission of providing relief from the devastation of Hurricane Maria.

Troops are being pulled out, too, along with helicopters that have flown supplies and equipment to communities cut off by landslides and broken roads.

Yet government statistics say power is still not on for more than half of homes and businesses, and water is out for more than 1 in 10.

Lieutenant General Jeffrey Buchanan recognizes that Puerto Rico is far from back to normal, but seven weeks after the hurricane hit, he insists the time is right to pass the baton.

“I think we’re in the right place to transition,” he tells CNN on the last day of his deployment.

Buchanan notes the visible signs of difference since he first arrived in Puerto Rico a week after Maria devastated the island. Below his helicopter, nature’s green shoots are making a comeback after the hurricane ripped leaves from trees and triggered mudslides that turned this verdant island brown.

He was deployed along with thousands of personnel to offer and coordinate aid with FEMA and local municipalities for the 3.4 million Americans of Puerto Rico.

But while the capital of San Juan and some other towns now have power, water and working community services, many do not, and there are so many other issues.

CNN research this month found entire communities still without electricity, and there are ongoing contract and technical problems with power restoration — last week just one incident on a transmission line wiped out power in San Juan and elsewhere for several hours. There’s not even a reliable number for how many people were killed in Hurricane Maria and its aftermath, and the island’s director of emergency management resigned on Friday.

Buchanan spends his last day flying to Maricao, nestled amid mountains in Puerto Rico’s interior. Here there is still no power and he takes notes from officials that three more water pumps and three more generators are needed.

Emergency generators are keeping the machines running at one of Maricao’s main employers — Fresenius Kabi, which supplies blood storage bags for the US market, according to Eric Santiago-Justiniano, the vice president of operations. The company employs 510 people in Maricao and 498 in San German, Puerto Rico. 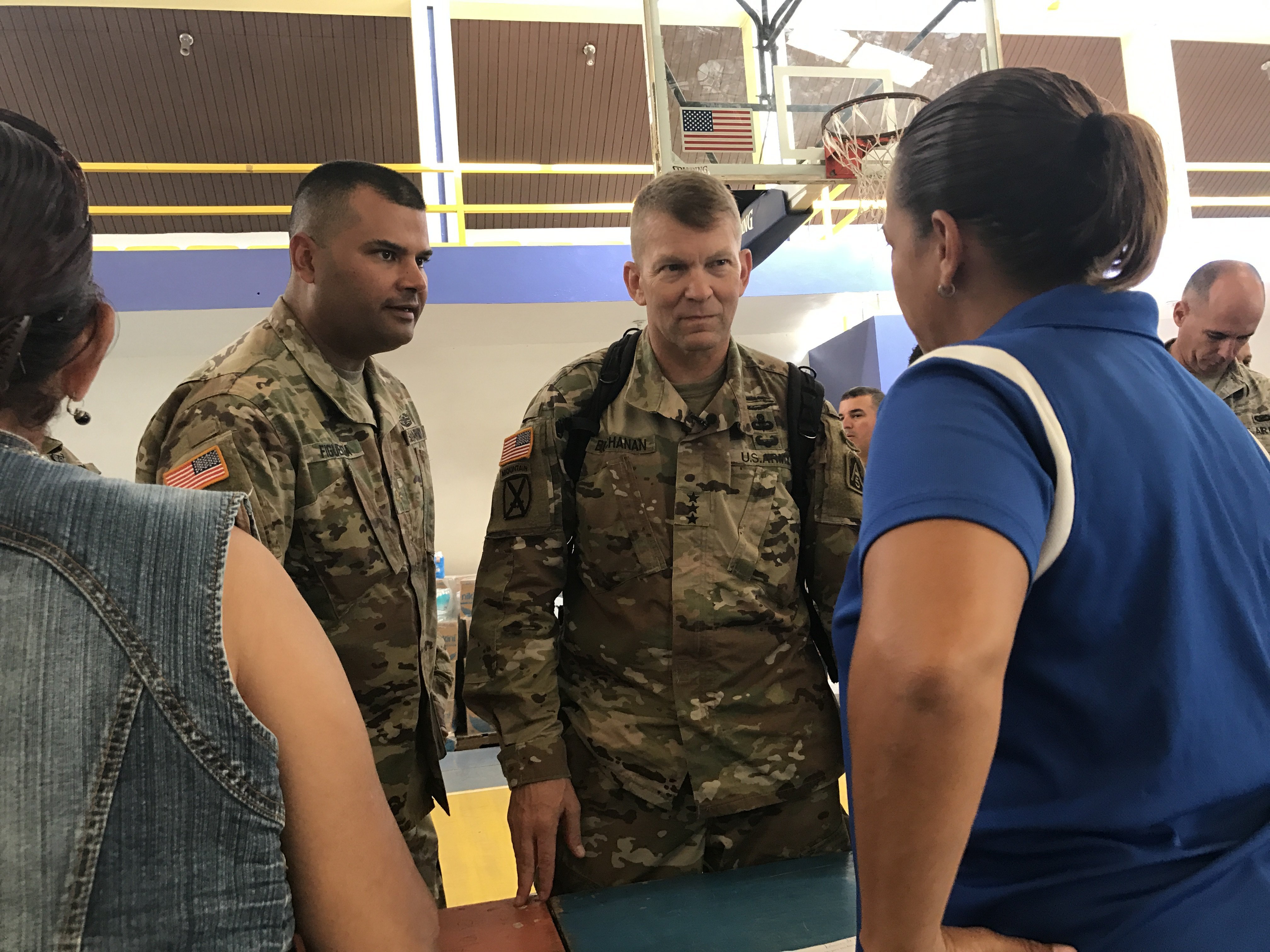 The generators are expensive and inefficient. Santiago-Justiniano says the company is spending between $95,000 and $140,000 a week on diesel for the generators.

“The big issue here in Maricao is power, being connected to the power grid,” he says.

There’s another looming problem — the continuing exodus of people leaving Puerto Rico for the mainland where conditions are better. Just in October, 15 people resigned from the company’s Puerto Rico facilities.

In Maricao, there is still a distribution center for vital supplies, and resident Carlos Rodriguez thinks they will need it for some time to come.

Rodriguez estimates his town is no more than halfway through the crisis, and he is concerned that Buchanan and US resources are leaving.

He praises the Puerto Rican National Guard for a good job, but feels more help is still needed from the mainland. “That’s what I want the general to take away,” he says.

Buchanan acknowledges the tough situation. “This area is going to be down for a little while for electricity,” he says in Maricao.

But he agrees with his orders to leave.

The decision to send Buchanan back to his headquarters in Texas was made jointly by Puerto Rico Gov. Ricardo Rosselló, FEMA and the Department of Defense. They said the federal military mission was over and any remaining tasks could be taken over by reservists and the National Guard.

“I have mixed emotions,” Buchanan says. “I have tremendous pride in all these troops, all four services … and they’ve done a phenomenal job, but the work isn’t done.

“We’re out of the emergency phase, but people still need help.”

It’s not just Buchanan leaving. Soon after the storm there were 72 helicopters flying relief missions. Now it is down to 38, and by the end of the week there will be 14.

That just makes sense, Buchanan says, because most roads are now open and the air missions are not needed.

Elsewhere, a field hospital in Humacao is being packed up, and the flow of patients to the USNS Comfort hospital ship docked off San Juan is slowing down.

Hundreds of servicemen and women will leave with Buchanan. But he points out that 2,500 army reservists are on active duty and about 5,000 members of the National Guard — from Puerto Rico and elsewhere — are working on the island, too, as the recovery mission continues under the long-term leadership of FEMA.

Buchanan is relieved that the Atlantic hurricane season is all but over. But then there’s next year.

“One concern I have, is resiliency for the next emergency,” he says.

“Things are not going to be back to normal by the next hurricane season.”