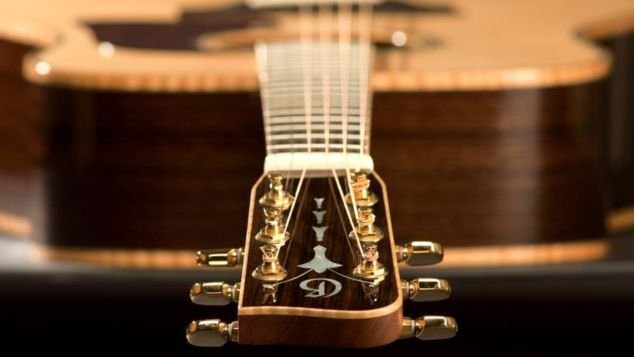 At a youthful 37 years old, Stephen Gallagher is a throwback.

As the owner of the tiny Gallagher Guitar Company, he sees himself as more artist than an aspiring business magnate.

While some guitar manufacturers crank out dozens of instruments every minute, Gallagher prefers to build things the old-fashioned way: literally, by hand. And if that means he creates less than one guitar a week, so be it.

“You’re not just buying a guitar — you’re buying a piece of art that somebody has put a lot of time into,” he said.

It’s how Gallagher guitars have been made since Stephen’s grandfather, a skilled furniture maker named J.W. Gallagher, started crafting fretboards and guitar necks instead of tables and cupboards in 1965.

Today, at the same Tennessee workshop where it all began, Gallagher still uses much of the same equipment as his grandfather. Over the years, three generations of Gallaghers have made guitars for some of the biggest names in country music, from Zac Brown and Johnny Cash to Waylon Jennings and Charlie Daniels.

So how did a guitar builder from this little town become a big name in the music business? With a bit of luck, and a lot of hard work.

It all began a few years after the company’s founding, when J.W. Gallagher attended the 1969 Union Grove Fiddler’s Convention with his son, Don, in the hopes of showcasing his creations.

At the convention, the Gallaghers met the legendary blind guitar virtuoso, Doc Watson. J.W. had brought along two guitars to show off and lent them to Watson to demo. Watson loved Gallagher’s G-50 model, but there was a problem — the guitar had a small crack, and J.W. was reluctant to give it away. But they struck a deal — Watson could play the guitar as long as he wanted, but had to return it to J.W. when he was done playing it.

The chance encounter was pivotal to the history of Gallagher Guitar.

Watson nicknamed the guitar “Ol’ Hoss” and played it for years, including in his appearance on the legendary Nitty Gritty Dirt Band album, “Will the Circle Be Unbroken.”

During one of the interludes on the record, Watson and country legend Merle Travis are chatting when Travis remarks that Watson’s guitar “rings like a bell.”

Watson replies that “Mr. Gallagher made this thing,” and the rest is history.

“You would be surprised that people still call today sometimes and will quote that conversation,” Stephen Gallagher said. “And that’s the reason they want to buy a Doc Watson model.”

‘You’re buying a piece of art’

Crafting a Gallagher guitar requires hard work, and lots of it: 70 to 80 hours spread over three months, in most cases. And if you want one of the 30 to 60 instruments Gallagher makes annually, be prepared to wait at least a year — “and that’s if it’s not too crazy custom,” Gallagher said.

At this guitar shop, the process begins with the search for the right wood, which can take time with some of the exotic varieties Gallagher uses on custom builds. Then begins the patient wait for the wood to dry and cure. Gallagher says he won’t even start building until the wood has less than 6 percent moisture content.

From there, Gallagher carves, sands and finishes each guitar by hand, the same way his father and grandfather before him did for more than 50 years.

For customers, the wait is worth it.

Ben Doerfel, frontman for the Nashville-based band Fuel on Fire, has played a number of custom-built Gallagher guitars and keeps coming back for more.

“If anyone met Stephen, they’d know why his guitars sound so good,” Doerfel said. “It’s because he cares. It’s a passion for him — he’s not just building guitars.”

Gallagher is well aware that investing in technology and automation would likely allow him to expand. But doing so could mean the loss of his business’ identity, which to him is what matters most.

For Gallagher, it’s important to preserve the ability to handcraft a guitar.

“There are hundreds and hundreds of guitar makers, builders and factories out there,” he said. “I just believe that we’ve done it for so long that changing now, we would just be another company.”