The death toll in a bomb and gun attack on a Sufi mosque in northern Sinai has risen to 305, with 27 children among the dead, Egypt’s state prosecutor said Saturday.

Another 128 people were injured, according to a statement from the public prosecutor read out on Egyptian state-run news channel Nile TV.

Between 25 to 30 armed men carried out the assault on the al Rawdah Sufi mosque in Bir al-Abed, the statement said.

The prosecutor also gave more detail about how the brutal attack unfolded. The attackers arrived in five SUVs and were armed with automatic machine guns, the statement said. They took position in front of the mosque and its entrances.

Survivors of the incident now at the hospital described massive gunfire and loud explosions at the start of the attack. A number of attackers, some of them masked, then entered the mosque, the statement said.

The attackers had long beards and hair, were wearing military fatigues and were armed with heavy machine guns, according to the statement. One of those who entered the mosque was carrying an ISIS flag, it said.

There has not yet been a claim of responsibility from ISIS or its affiliate in Egypt. However, the attack bears the hallmarks of a strike by ISIS.

Despite the efforts of Egyptian security forces, ISIS maintains a foothold in the north of the Sinai Peninsula and inspires local Islamist extremist groups. 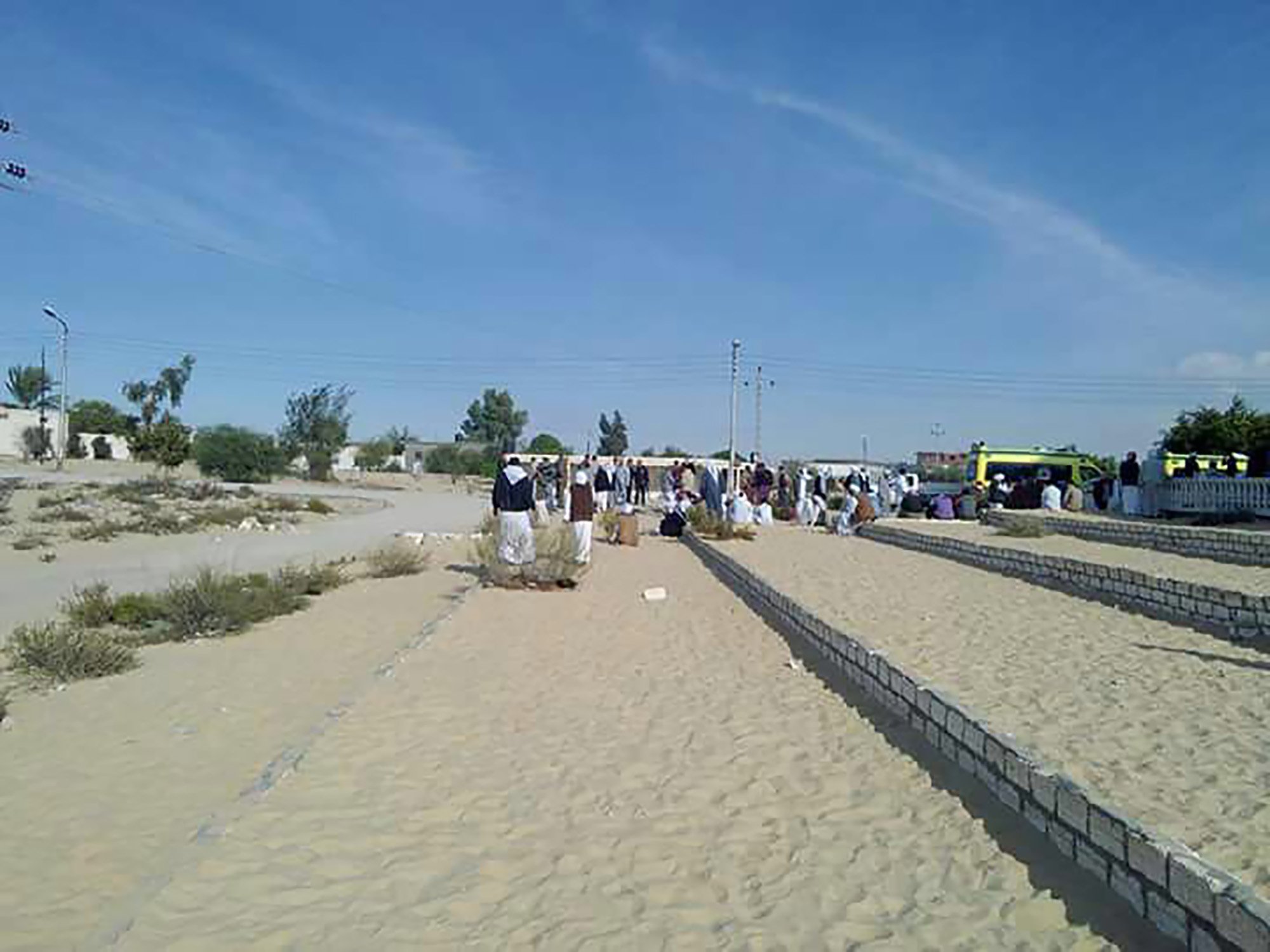 President Abdel Fattah el-Sisi has vowed to respond to the massacre — believed to be the deadliest terror attack on the country’s soil — with “brute force.”

“The Egyptian Air Force pursued the terrorist elements, discovered and destroyed a number of vehicles that carried out the brutal terrorist killings, and killed all terrorists inside those vehicles,” military spokesman Tamer Rifai said in a statement Saturday.

Al Rawdah mosque is known as the birthplace of an important Sufi cleric. Sufism is a mystical branch of Islam that some jihadists consider heretical.

Witnesses told CNN Friday that the attack started when an explosive device went off in a building adjacent to the mosque and that gunmen fired at worshippers as they fled. They said gunmen then entered the mosque and fired at those inside.

The attackers had also set up “ambush” locations and opened fire on ambulances as they transported the wounded to al-Arish before the arrival of security services, according to witnesses.

Photos from inside the mosque showed what appeared to be bodies lined up in rows on the carpet.

One man told CNN he drove one of the first ambulances to the scene but turned around after shots were fired at the vehicle. Ambulances from al-Arish managed to reach the mosque only after security forces secured the road, he said.

The attackers used automatic weapons, said Diaa Rashwan, the chairman of the state information service. Some victims were also killed by the explosions.

In a short, televised speech after meeting with security officials, Sisi said the government would hunt down the attackers.

“We will respond to this act with brute force against these terrorists,” he said.

“This terrorist act will strengthen our resolve, steadfastness and will to stand up to, resist and battle against terrorism.”

Three days of national mourning have been declared. Sisi has also ordered the armed forces to build a memorial to those killed at the mosque, a statement on his official Facebook page said.

The grand imam of Al-Azhar, the premier religious authority in Egypt, condemned the “barbaric attack” on the mosque.

“The shedding of blood, the violation of the sacred houses of God and the terrorizing of worshippers, are acts of corruption on the earth,” Ahmed El-Tayyeb said.

The targeting of mosques followed an attack on churches, El-Tayyeb said, adding that Egyptians would prevail over terrorism with solidarity and determination.

Friday’s attack prompted wide international condemnation, with US President Donald Trump among the leaders expressing their condolences and vowing to continue the fight against terrorism.

The Wilayat Sinai group, which pledged allegiance to ISIS in 2014, has been behind numerous attacks and hundreds of deaths in the desert region.

It claimed responsibility for the bombing of a Russian passenger jet which crashed in the Sinai Peninsula with the loss of 224 lives in October 2015.