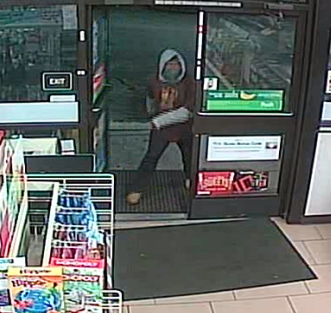 PORTSMOUTH, Va. – The Portsmouth Police Department is investigating a robbery that occurred at a 7-Eleven on Wednesday.

The robbery happened around 2 a.m. at the convenience store on 4001 Greenwood Drive.

Police say that a man entered the store and pulled out a knife before demanding money from the store clerk.

After the clerk gave the suspect the money, he fled the scene.

No one was hurt during the robbery, say police.

The suspect is described as a black man, who was last seen in dark colored pants, a gray and burgundy hoodie and light colored shoes.

Police are asking anyone with information about this incident or who may recognize the suspect in the photographs to call the Crime Line at 1-888-LOCK-U-UP℠ (1-888-562-5887).