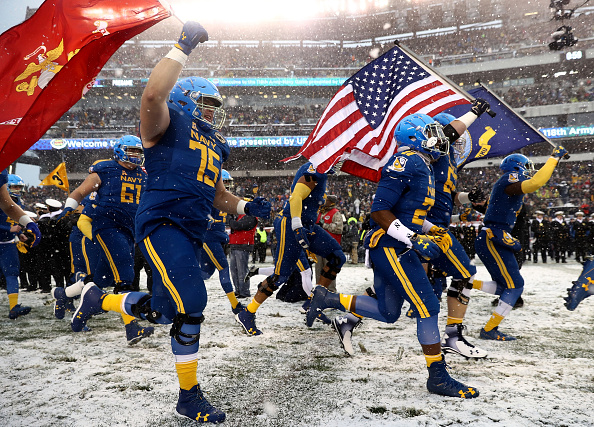 PHILADELPHIA, Pa. – On a snow-covered Lincoln Financial Field in Philly, Army beat Navy 14 to 13, claiming its first Commander-in-Chief trophy win since 1996, and its second straight victory over the Midshipmen.

Army would take the lead from Navy after its quarterback Ahmad Bradshaw would rush for a 1-yard touchdown with 5:10 remaining in the game.

Army got on the board first in the 118th playing of the Army-Navy Game.

West Point running back Darnell Woolfolk capped off the opening game drive with a 3-yard touchdown run. Army would take almost seven minutes off the clock in the game opening drive.

Navy would respond with three points, when Midshipmen kicker Bennett Moehring  placed a 28-yard-kick through the uprights with 55 seconds left in the 1st quarter.

The Midshipmen would then take the lead halfway through the 2nd quarter when quarterback Malcolm Perry broke up the middle for a 68-yard-run, giving Navy the lead over Army 10 to 3 with 11:28 left in the half.

Leading at half, the Midshipmen would add three more points when Bennett connected on a 24-yard-field goal with nine minutes to go in the third quarter.

But third down conversion and time-of-possession played in West Point’s favor in the second half, even though the Midshipmen out gained Army in total yards.

The Black Knights also held on to the ball for 31 minutes on offense, while Navy only had possession for 28 minutes.

This is the second year in a row that Army (9-3 overall) has beaten Navy (6-6 overall). Before 2016, the Midshipmen had beaten West Point for 14-years straight.

Secretary of State Rex Tillerson was at the game to represent the White House. Last year, President Donald Trump was in attendance, while he was still president-elect.

Both the Midshipmen and the Black Knights will play in bowl games this year.

Army will next play San Diego State in the Armed Forces Bowl at Amon G. Carter Stadium in Fort Worth, Texas.

Navy will play the Virginia Cavaliers next in the  Military Bowl at Navy-Marine corps Memorial Stadium in Annapolis, Maryland.