Suites at sea: The ocean’s most exclusive rooms 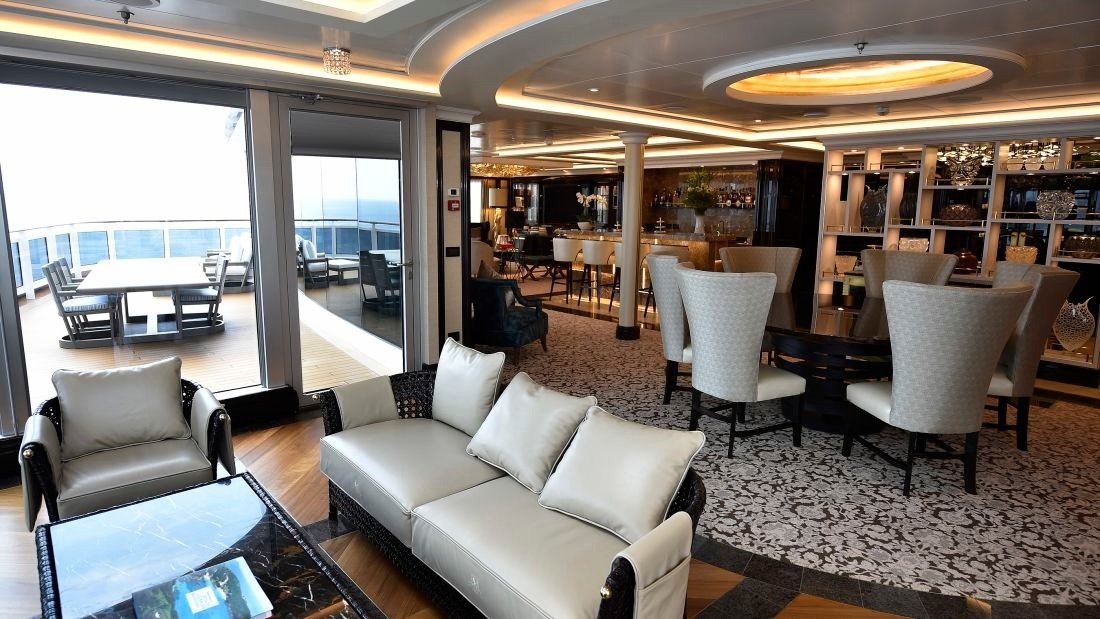 There are plenty of reasons why hitting the waves is the choice of many when it comes to precious vacation time, but another is the often jaw-dropping range of accommodation available at sea.

From palatial suites that would grace a hotel penthouse to historic vessels exuding nostalgia and charm, here are some of the most exclusive, expensive and distinctive ways to cross the world’s oceans in serious style.

As bragging rights go, one of the world’s largest suites at sea comes in at a cool $10,000 or so a night aboard the Regent Seven Seas Explorer. Launched in the summer of 2016, crystal chandeliers, Versace crockery and Murano glass ceilings show how $450 million was dropped on crafting the ship.

For your money, you get an enormous 4,400 square feet of space, including a custom Steinway grand piano and an in-suite spa with full sauna, while another $150,000 was spent just on one of your beds, the opulent Savoir No. 1.

Unlimited fine dining, spa treatments and on- and off-shore excursions are also included, as well as a personal butler and private car. But at that price you probably won’t want to be spending too much time on terra firma.

The 1,345 square-foot Crystal Penthouse aboard Crystal Serenity comprises a living room, den, dining area with ocean view, two bedrooms and, naturally, a butler’s pantry. There’s also an in-room washer and dryer so you can handily get your laundry done.

The master bathroom features a heated marble bench in the glass shower, lest your buns get chilly, while you can also admire the ocean view from your Duravit flotation tub or tune in to your flat-screen TV embedded in the vanity mirror.

You also get extra culinary bells and whistles like in-suite dining, complimentary wine and spirits, not to mention a bottle of Cristal on arrival. If you want to get time with the captain, then an invite to his cocktail party and a private bridge tour is also included.

An eleven-day cruise from Colon to Fort Lauderdale costs $27,605 per person.

A completely different nautical experience comes aboard a 12-person superyacht that sleeps twelve in stylish Art Deco interiors. MY The Wellesley is an extension of London’s Wellesley Knightsbridge hotel and the lower deck Master Suite features leather paneling, mahogany and bronze details, not to mention the mandatory walk-in closet.

The bathroom has eminently stealable smellies in the form of Hermès amenities, perfect for kicking back in your bath and shower crafted from Arabescato Corchia marble from Italy’s Cararra region.

A permanent crew of twelve look after your every need, while there are 3,700 square feet of outdoor space across three decks that include an outdoor cinema, Jacuzzi, jet and water skis, as well as everything you need to dive. For your James Bond villain moment, there’s even a cigar humidor and smoking deck.

The yacht sleeps twelve and costs from $370,000 to charter for one week. It is based in the Mediterranean in the summer and heads to the Caribbean for the winter.

Seabourn’s latest ship the Seabourn Encore only launched earlier this year and its Wintergarden Suite is the most luxurious and largest. You get to kick back in 1,550 square feet of indoor and outdoor space including two bedrooms, two private verandas, a dining room seating six and two and a half bathrooms.

The Encore’s interiors were the work of renowned hotel and restaurant designer Adam D. Tihany, fusing contemporary elements and technology with understated elegance. That’s especially evident in the glass-enclosed solarium with soaking tub and daybed, from where sunset views don’t come much better.

Cuisine is a special draw on the Encore thanks to restaurants including The Grill from legendary Michelin-starred chef Thomas Keller. They promise a “timeless menu” in the steakhouse-style spot, with old-school favorites like Lobster Thermidor.

A seven night Greek & Italian Jewels trip from Athens to Rome from $13,861 per person.

Amongst the 1,250 guests on board the Oceania Riviera, Owner’s Suite occupants win the biggest suite prize hands-down thanks to more than 2,000 square feet of space. The suite includes a living room, dining room and master bedroom while there’s even a self-playing piano, so you can pick a tune to be serenaded by.

Furnishings come courtesy of Ralph Lauren, and you could easily host a party in your bathroom with its hot tub and TV. Guests also get a raft of extra amenities and services for their money, including access to a private Executive Lounge.

Your in-suite bar is set-up with six complimentary premium spirits and wines, your amenities are by Bulgari and you get personalized stationery so you can send off letters to remind friends and family just how lucky you are.

At 575 square feet they provide sweeping ocean views as well as a separate living room and dining area.

As you’d expect, you also get a sizeable veranda, flat-screen TVs, a master bathroom and a separate powder room, for all your powdering needs. The Star Pride only carries a maximum of 212 guests, meaning you may feel more like you’re on a private yacht than a cruise liner.

The Star Pride’s size means it can navigate small harbors, rivers and even hidden beaches. Windstar also runs an open bridge policy, allowing you to visit at almost any time to brush up on your navigation skills with the captain.

Perfect for families or groups of friends, the duplex Garden Penthouse aboard the Genting Dream sleeps up to six people in 2,400 square feet of luxury. If you’re feeling generous you can also book interconnecting suites to extend the invitation further.

The Penthouse includes three bedrooms, a living room with dining area, while once again a grand piano makes an appearance. Your large balcony with whirlpool and sundeck is definitely an added bonus, meaning no need to fight for sunbathing space by the pool.

Butler service is included, but if you fancy dining outside the suite then you get complimentary set menu meals in all the ship’s outlets as well as meal credits in five specialty restaurants.

A five-night cruise from Hong Kong to Okinawa starts from $4,100 per person in low season.

Staying in Asia, an altogether different proposition comes in the form of the Alila Purnama whose name translates as “Full Moon.” It’s a traditional Indonesian wooden two-masted phinisi boat, but one fitted out with every conceivable luxury.

The suite boasts a balcony and sundeck complete with daybed for the ultimate in relaxation. Elsewhere on board, a spa therapist helps guests relax still further through their signature Alila massage, available on board or perhaps on a nearby beach.

A six-night Raja Ampat Expedition costs from US$8,500 per person, based on two guests sharing.

A luxurious home at sea comes aboard the truly unique Sea Cloud, a floating windjammer palace built in 1931 for a Wall Street broker and designed by his wife, the businesswoman and heiress Marjorie Merriweather Post. Back then it was known as The Hussar and was the largest private sailing yacht of the day.

Today, Sea Cloud’s Owner’s Cabin comes in at 410 square feet and, while it’s not the largest at sea, it’s certainly one of the most distinctive thanks to its portholes, Louis XIV-style canopy bed, marble fireplace, golden stucco and etched mirrors.

Beneath billowing white sails, the decks are filled with charm, glamor and history from years gone by, but guests can also expect modern-day conveniences and luxuries to complete the distinctive maritime experience.

Another luxury suite hosts guests in the Galapagos Islands. The newly-renovated M/Y Grace yacht boasts an incredible history, having seen service in WWII with the British navy, before being offered as a wedding gift from Aristotle Onassis to Prince Rainier and Princess Grace Kelly of Monaco.

The vessel was named after the iconic princess, as was the new Grace Kelly Suite designed by Adriana Hoyos whose furniture, décor and lighting were designed to adjust to different ambiances.

If you’ve had your fill of iguanas, the sun deck and wine cellar are two distractions from the extraordinary natural world around you. Quasar Expeditions also include all meals and snacks, transfers, guided services, snorkeling gear, kayaks and non-alcoholic beverages in their price.

The Grace Kelly suite is $8,900 per person for seven nights in high season.

Whilst it’s not a suite at sea, European river cruises have grown in popularity and the 401 square-foot Royal Suite on Uniworld’s S.S. Catherine offers special views of the Seine and Rhone from its open-air balcony and living room.

With just 159 guests, the S.S. Catherine is a world away from large scale cruising, but that doesn’t mean that suites miss out on luxuries. You get to sleep in hand-crafted Savoir beds and scrub up with Hermes bath and body products.

Christened by and named for the legendary French actress Catherine Deneuve, the interiors are colorful and whimsical. You also get in-suite butler service, in-room breakfast and even a daily cookie plate.

The 15-day Grand France voyage from Paris to Avignon starts from $15,799

This classic Dutch schooner, a sailing yacht for true connoisseurs, was built way back in 1902 before being completely refitted in 2011. Over the years she has been a cargo ship, a supply vessel in the war and even a racer, having won 1988’s New Zealand Tall Ship Race.

Today she hosts up to eight guests in four cabins, supported by a crew of 12, with the Master Stateroom being the one you’d most want to nab. The schooner’s new owner is Swiss and their attention to detail is clear in the intricate nautical finishes such as teak, Persian rugs and a marble bathroom to call your own. You also get high ceilings, a queen size bed and a sofa.

Since 1994, Adelaar has sailed the waters of Indonesia including around Alor, one of the least-visited regions, where volcanoes and world-class diving are two of the special draws.

The weekly charter rate through Northrop and Johnson runs at $44,000.