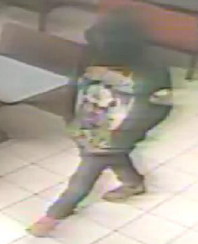 HAMPTON, Va. – The Hampton Police Division is asking for the public’s assistance in identifying a suspect involved in a business robbery that happened on December 21.

On the night of the incident around 7:45 p.m., dispatchers received a call in reference to a business robbery at the Spin Queen laundromat in the 900 block of West Pembroke Avenue. The investigation revealed that the suspect entered the business, displayed a firearm and demanded money.

After receiving an undisclosed amount of money, the suspect fled the area on foot and was last seen heading westbound on West Pembroke Avenue.

The suspect is described as a black male who was last see wearing all dark clothing with a large multi-colored design on a hooded sweatshirt. He also had a black mask covering the lower portion of his face.