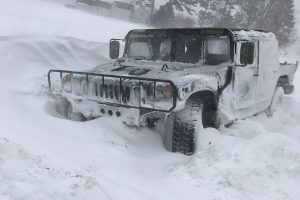 HAMPTON ROADS, Va. – Before the winter storm hit, more than 100 Virginia National Guard Soldiers were deployed to Hampton Roads and the Eastern Shore.

When Virginia Governor Terry McAuliffe declared a State of Emergency for the Commonwealth on January 3, members of the Virginia National Guard were prepared for helping those across the state with the impeding storm, and did so through transporting over 30 first responders in the area when snow impeded the travel of those needed to help community members.

Using Humvees and light/medium tactical trucks allowed the National Guard to more easily get to places than vehicles used by local first responders.

Along with transporting first responders, Virginia National Guard members also assisted with response calls and patient transports, while aviation crews delivered food, medicine and other supplies to icebound Tangier Island, Virginia, according to a release from officials.

“Virginia is very fortunate to have great teams of first responders and emergency services professionals who keep our citizens safe during incidents of hazardous weather, and the Virginia National Guard’s job in domestic operations is to provide additional assistance when the situation exceeds their capabilities,” explained Brig. Gen. Paul Griffin, Virginia National Guard Director of the Joint Staff.

“I think our Soldiers, Airmen, Virginia Defense Force members and state and federal civilian employees did a great job across the board whether it was driving through heavy snow, flying supplies to Tangier Island, coordinating with partner agencies, managing mission information or providing sustainment support to make sure they had food, fuel or whatever else they needed to conduct their missions. It was a great team effort, and they should all feel proud of the contribution they made to the multi-agency response that helped their fellow Virginians when they really needed it,” added Brig. Gen. Griffin in his statement.

Members of the Virginia National Guard that helped with winter storm relief efforts were released from duty on January 7.