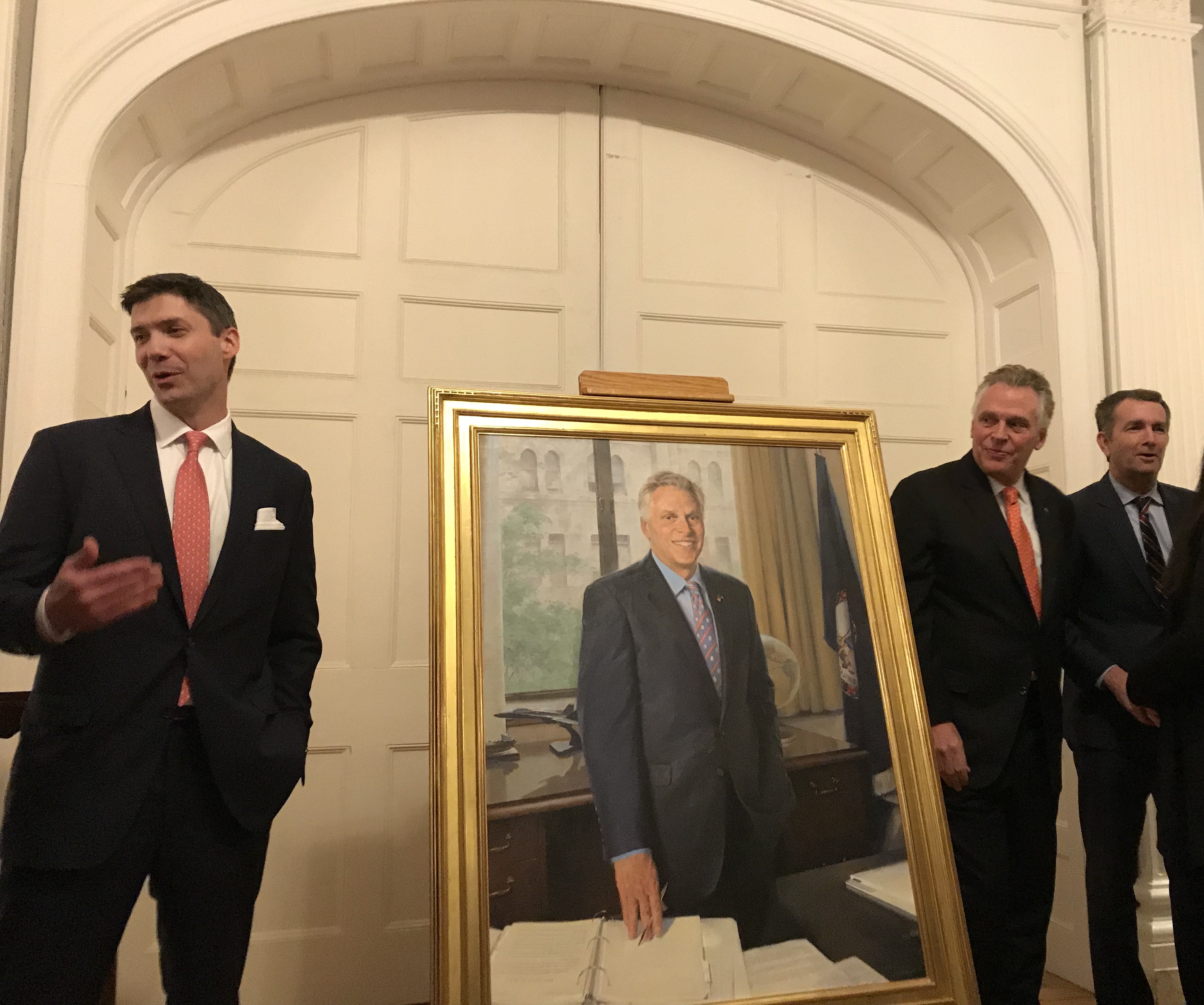 The new painting that will hang in the state Capitol carries a subtle reference to a part of the governor’s colorful political history.

“As far as I know, Gov. McAuliffe is the only American governor who has ever wrestled an alligator,” Gavin Glakas, who painted the portrait, said when it was unveiled Wednesday at the Executive Mansion. “So you have to be looking for it, but there’s a little alligator.”

The portrait will be displayed among those of McAuliffe’s predecessors on the third floor of the state Capitol.

Glakas, who paints and teaches at the Yellow Barn Studio in Glen Echo, Maryland, spoke before a crowd that included Gov.-elect Ralph Northam and Richmond Mayor Levar Stoney. Glakas said he began painting the portrait in April, working off and on until he finished on Friday.

As to the alligator, it’s a reference to a fund-raising stunt by the governor when he worked for President Jimmy Carter’s unsuccessful re-election campaign in 1980.

When it came to the overall setting of the portrait, however, McAuliffe went traditional — he wanted the painting to show him at work, Glakas said.

“We could’ve set (the portrait) at Monticello, with the setting sun in the background,” said Glakas, whose paintings also hang in the U.S. Capitol and other prestigious locations. “But the governor wanted to talk about work—he wanted to be at work. So I knew we had to set it in his office.”

In the portrait, McAuliffe stands behind his desk with his right hand over documents on “the restoration of rights,” Glakas said. During his term as governor, McAuliffe restored the voting rights of about 170,000 felons who had served their prison time.

“I did get sued twice by the Virginia General Assembly for my restoration of rights,” McAuliffe joked, turning to Northam. “I’m the first governor to get sued for contempt of court. I’m not sure, but I’m hopeful you will, because you’re leaning in on those issues.”

Glakas described the governor’s expression as “relaxed and in charge.” However, it might also be seen as slightly stiff. “This is not something, if you know my personality, that I’m really into,” McAuliffe said. “A portrait, really?”