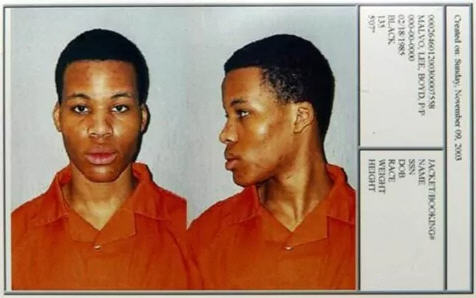 RICHMOND – A three-judge federal appeals court panel heard arguments Tuesday on whether Lee Boyd Malvo, who was convicted of murder in the Beltway sniper attacks in 2002, is entitled to a new sentencing under a U.S. Supreme Court decision that made life without parole unconstitutional for juveniles.

“There are real serious considerations in re-sentencing dangerous criminals – which no one can argue Mr. Malvo isn’t,” McGuire said in court.

Malvo was 17 when he and John Allen Muhammad, then 41, killed 10 people in Virginia, Maryland and Washington during September and October of 2002.

Muhammad was sentenced to death and executed in Virginia in 2009. Malvo was given four life terms and is an inmate at Red Onion State Prison in Wise County.

In 2012, the U.S. Supreme Court ruled in Miller v. Alabama that a juvenile could not be sentenced to life without the possibility of parole, except in the rarest of cases. Even then, a sentencing judge must make an individualized and focused evaluation before sentencing, the high court said.

“It is possible, given the option, that they would have gone lower than life without parole,” Cooley told the court.

“Lee Boyd Malvo is a serial murderer,” one of his documents states. “Lee Boyd Malvo and John Muhammad terrorized people living along the I-95 corridor between Virginia and Maryland for nearly a month in the fall of 2002, randomly killing 10 innocent people going about their daily activities and wounding numerous others, including a child.”

The appeals panel did not indicate when it might rule.

Malvo has been convicted and given life sentences in Maryland as well. Last year, a judge ruled that he will not receive a new sentencing hearing there.