For the first time, scientists say they created cloned primates using the same complicated cloning technique that made Dolly the sheep in 1996. 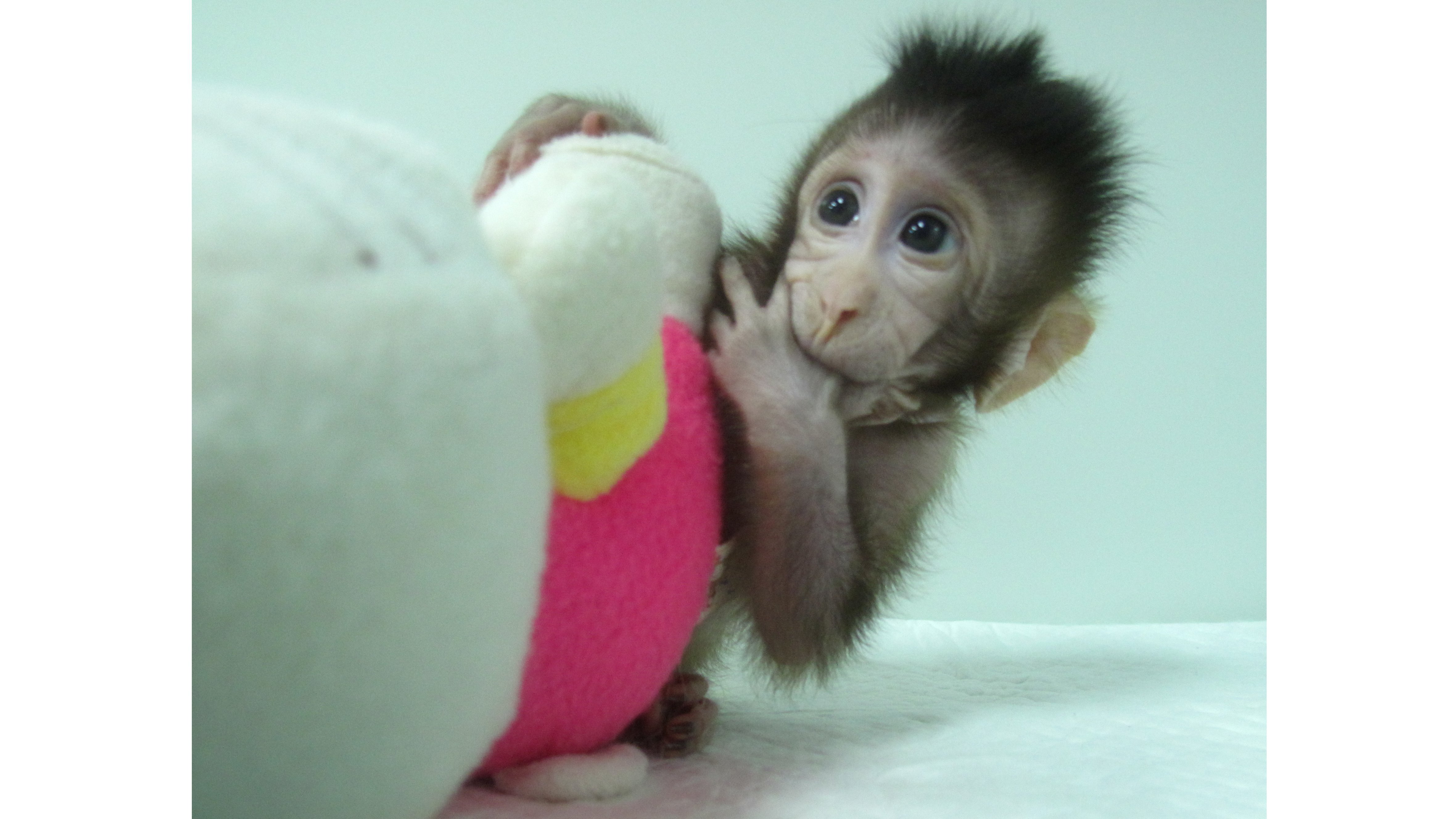 Shanghai scientists created two genetically identical and adorable long-tailed macaques. The monkeys are named Hua Hua and Zhong Zhong, a version of the Chinese adjective Zhonghua which means the “Chinese nation” or “people.”

The research was published in the journal Cell on Wednesday.

These two are not the first primates to be cloned. Scientists in 1999 created Tetra, a rhesus monkey, but used what researchers consider a simpler cloning method that produces a more limited number of off spring. In Tetra’s case, scientists split the embryos, much like what happens naturally when identical twins develop.

In the case of Hua Hua and Zhong Zhong, researchers used modern technology developed only in the last couple of years to enhance the technique used to clone Dolly, which is called somatic cell transfer, or SCNT. This is where scientists reconstruct an unfertilized egg. The researchers remove the egg’s nucleus — the part of the cell that contains most of its genetic information– and replace it with the nucleus from another cell. It’s then stimulated to develop into an embryo, which is transplanted into a surrogate mother. That same cell cluster can make more genetically matched animals.

When scientists made Dolly the sheep, years after she was born they used the same cell cluster to make four other sheep clones.

The SCNT technique has worked to create about 20 different animals including frogs, mice, rabbits, pigs, cows and even dogs, but there have been “numerous attempts to clone non-human primate species, but they all failed,” said Mumming Poo, an author on the paper. Scientists long thought something in a monkey’s genes made the technique unsuccessful. The success of Poo’s team came from several factors, he said.

The team tweaked the SCNT procedure using new technology that helped with the nucleus transfer and the fusion of cells. The team spent three years perfecting the delicate procedure. Speed while performing the procedure helped, they learned, and scientists discovered clones created out of cells from fetal tissue did better than when they used adult cells.

“By optimizing the method, we obtained 79 well-developed embryos and implanted them in 21 female monkey surrogates,” Poo said. That resulted in six pregnancies and the births of the two monkeys in late 2017. They hope more monkey babies will be born soon from these embryos.

Scientists unaffiliated with the experiment say the limited success rate of the procedure suggests more work is needed before this practice becomes common. “While they succeeded in obtaining cloned macaques, the numbers are too low to make many conclusions, except that it remains a very inefficient and hazardous procedure,” said Robin Lovell-Badge, an embryologist and head of the Division of Stem Cell Biology and Developmental Genetics at the Francis Crick Institute.

“You do have to start with proof of principle,” said Jennifer Barfield, an assistant professor in biomedical sciences at Colorado State University, about the low number of births. She is not affiliated with the new study, but is working on reproductive technology research involving buffalo. She found the work interesting and important, “particularly for primates, where success hasn’t been that easy to come by.”

The birth of these clones also brings up ethical issues. Humans are in the primate family. With this birth, these scientists have broken a barrier and that means the technique could, in theory, be applied to humans. The authors of the paper say they have no intention of trying and they believe their results should spark a wider discussion about the laws and regulations the world needs to regulate cloning.

Darren Griffin, a professor of genetics at the University of Kent, said “careful consideration now needs to be given to the ethical framework under which such experiments can, and should, operate.” He noted, critics will evoke, “the slippery slope argument of this being one step closer to human cloning.” However, Griffin said he thinks the benefits of this approach are clear and “cautious optimism is my personal response to this study. The study itself is very impressive technically.”

The authors of this experiment say they will continue working to improve the SCNT approach. They also plan to watch how Zhong Zhong and Hua Hua develop physically and mentally.

They ultimately hope the creation of these clones helps researchers better understand human disease. Poo said that the Chinese government intends to dramatically increase the size of the lab and the project. He predicts within five years there should be 20 to 30 more facilities creating monkey clones. Researchers want to use additional clones to study genetic diseases such as autism, Parkinson’s, Alzheimer’s and Huntington’s.

“Nonhuman primate research remains vital to the continuation of medical research and advances in human health,” said James Bourne, an associate professor and National Health and Medical Research Council senior fellow at the Australian Regenerative Medicine Institute at Monash University, who is not affiliated with this study. “The recent description of a protocol to clone macaque monkeys by somatic cell nuclear transfer could be an important tool in medical research for understanding disease in a species genetically more comparable to humans.”

The future for Hua Hua and Zhong Zhong

Hua Hua and Zhong Zhong are being bottle fed and appear to be developing normally, scientists say. They get regular physical check ups and when they are a little older, scientists will study their mental health to see if there are any problems.

“The two monkeys are very active and healthy, they progress very rapidly like human babies,” author Qiang Sun said. “Every other day, they seem more active and their motor system is much more developed and (there are) no signs of abnormality.”

Video from the lab of the active pair shows one monkey likes to suck its thumb. One climbs over its stuffed Hello Kitty doll attempting to figure out how to get through the top of its incubator. The other monkey seems curious about the camera documenting its every move — that is, until it’s distracted by its sibling jumping on its back.

In other words, the clones seem to be up to typical monkey business.